As US reopens, campuses tighten restrictions for virus 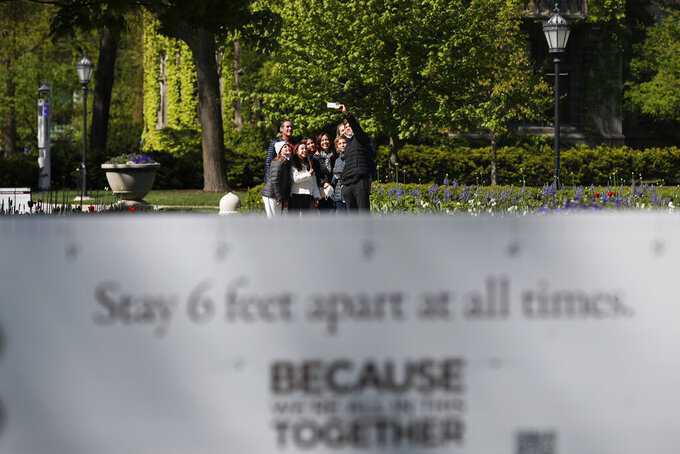 A group of visitors take a selfie near a sign reading "stay 6 feet apart at all times," Thursday, May 6, 2021, on the University of Chicago campus in Chicago. Even as restrictions relax across much of the United States, colleges and universities have taken new steps to police campus life as the virus spreads through students who are among the last adults to get access to vaccines. (AP Photo/Shafkat Anowar)

BURLINGTON, Vt. (AP) — About a year into mask mandates, nasal swabs and remote classes, the atmosphere turned tense at the University of Vermont as the school cracked down on rules for social distancing and face coverings amid a spike in student COVID-19 cases.

Students were handed hundreds of citations for violations like standing in another student’s doorway or walking maskless to a hallway restroom, igniting a student-led petition that blasted “strict and inhumane living conditions.”

“You start to feel suffocated like I’m afraid to leave my room,” freshman Patrick Welsh said in an interview on campus.

Even as restrictions relax across much of the United States, colleges and universities have taken new steps to police campus life as the virus spreads through students who are among the last adults to get access to vaccines. Administrators say they've needed to act urgently to avoid risking an early end to the semester or sending infected students home and spreading COVID-19.

In recent weeks, the University of Michigan punished hundreds of students for missing mandatory virus testing by deactivating their access cards to nonresidential buildings, and Cornell University announced that students would lose access to campus Wi-Fi, course materials and facilities for missing virus tests. The University of Chicago locked down residence halls for seven days and shifted classes online after finding more than 50 cases in a matter of days.

The measures come as administrators assess whether in-person commencement ceremonies are feasible, how to get students vaccinated and whether to make the shots a requirement. The onset of warm weather and eased restrictions outside campus gates pose additional challenges.

“What we’re trying to prevail on students is two things. First, let’s not get commencement canceled with some sort of last-minute major surge in COVID infections, and secondly do not take a chance on taking a COVID infection home,” Simmons said.

The historically Black university also has been pushing students to get vaccinated on campus, he said, bringing in speakers to address vaccine hesitancy.

At the University of Vermont, just under 100 students tested positive for the virus during the fall semester. But the numbers surged in the spring, with more than 680 students infected so far this semester. Gary Derr, vice president for operations and public safety, said the fall semester got off to a smoother start because it was warm enough for students to socialize outside.

“We came back in the spring and we were stuck indoors,” he said. Like many campuses, there was no spring break to look forward to; the university didn’t want students bringing the virus back with them.

UVM students agree to a pledge that they will abide by school rules for preventing the spread of the coronavirus and violations can lead to fines, probation or suspension for repeated offenses. This spring, six students have been suspended and 23, some of whom had faced full suspension, are banished from campus, allowed only to join classes remotely, after the school agreed to review the cases.

As tulips and daffodils bloom on campus, signs tell students to keep up the practices like social distancing and mask wearing. At the COVID-19 testing center, where students are tested twice a week, banners say, “IT’S UP TO US” and “THANKS FOR DOING YOUR PART.”

The warmer weather has made it easier to see friends and classmates on campus, students said, but fears of being penalized have taken a toll.

“If I go anywhere on campus and I mess up, like I’m sitting too close to someone or my mask is below my nose, I could get fined or I could get suspended. It makes you afraid and it’s terrible for mental health,” said Welsh, of Hopkinton, Massachusetts. “And I think the UVM administration is not really recognizing that; they’re just trying to look good.”

When hundreds of young people crowded onto a Burlington beach the second weekend in April, student Gary Sinclair of St. Johnsbury, Vermont, saw it as a kind of revolt against the crackdown.

“We were working really hard to make sure the school stays open so that those guys can make money,” Sinclair said, “but I think North Beach was a huge, almost a statement to the UVM administration that, ‘You know what? If you’re going to try to intimidate us with fear and fines, kicking us out, stuff like that, then we’re all going to go to the beach and you’re not going to kick all of us out.’”

In late April, Derr announced infection rates at UVM had fallen enough to allow multihousehold gatherings of UVM students living on- and off-campus.

Nicole Hardy said students haven’t lost sight of the virus but have become desensitized as time has passed.

“I still see people going into quarantine every week, and I still know there are people that are getting sick. ... So it’s like there’s still a lingering concern,” she said. “But I would say overwhelmingly people are prioritizing socializing right now.”