US stocks step back from all-time highs in choppy trading 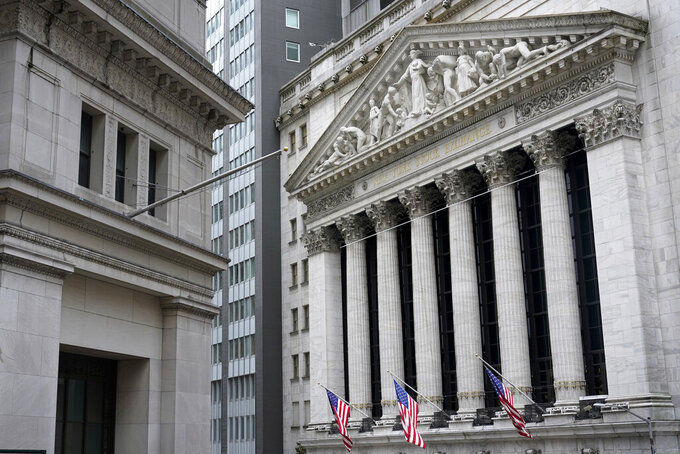 Wall Street capped a choppy day of trading Tuesday with stock indexes closing mostly lower after coming within striking distance of matching the market's longest winning streak of the year.

The S&P 500 fell 0.2% after wobbling between small gains and losses most of the day. The modest pullback snapped the benchmark index's five-day winning streak. A sixth-day of gains would have matched the S&P 500's longest winning streak so far this year, though the index remains near its all-time high.

Stocks' uneven finish came as investors continue to closely watch the bond market, with even minute changes in bond yields causing stocks to fluctuate. Bond yields also wavered Tuesday. The 10-year Treasury yield, which influences interest rates on mortgages and other consumer loans, inched up to 1.62%.

“The 10-year is remaining above 1.60%,” said Sam Stovall, chief investment strategist at CFRA. “So, investors are in a sense girding themselves for higher inflation.”

The big technology names that rose sharply in 2020 were among the gainers Tuesday. Apple rose 1.6%, Google’s parent company added 1.4% and Facebook rose 2%. Tech stocks have moved in tandem with the bond market, so as some bond yields ticked lower on Tuesday, it moved technology stocks in the opposite direction.

Investors weighed new economic data Tuesday that showed Americans cut back on spending last month, partly due to bad weather in parts of the country that kept shoppers away from stores, and partly due to their December and January stimulus payments running out.

Retail sales fell a seasonally adjusted 3% in February from the month before, the U.S. Commerce Department said Tuesday. February's drop followed soaring sales in January as people spent $600 stimulus checks sent at the end of last year. In fact, the Commerce Department revised its January number upwards to 7.6% from its previously reported rise of 5.3%.

“We’re still in the midst of getting back to a more normal environment,” said Jason Pride, chief investment officer of private wealth at Glenmede. “Given the lumpiness of government stimulus payments, we're going to see numbers jumping around.”

Investors are betting big that this economic malaise will dissipate as spring arrives for most of the country and more Americans get vaccinated. Further, President Joe Biden's administration started sending out $1,400 stimulus checks to individuals last weekend.

Some investors fear the stimulus could translate into inflation down the road, however, which has caused investors to sell bonds. When bond prices fall, their yields rise.

Wall Street will be closely watching the Federal Reserve's latest economic and interest rate projections Wednesday. Economists expect Fed Chair Jerome Powell will try to convince jittery financial markets that even as the economic picture brightens, the central bank will be able to continue providing support without contributing to higher inflation. Many investors envision a swift and robust recovery later this year that could accelerate inflation and send long-term rates surging.

European shares rose despite news that some users of AstraZeneca's coronavirus vaccine, which was being used heavily in Europe and Asia, reported blood clots. The vaccine's usage is suspended in Europe.