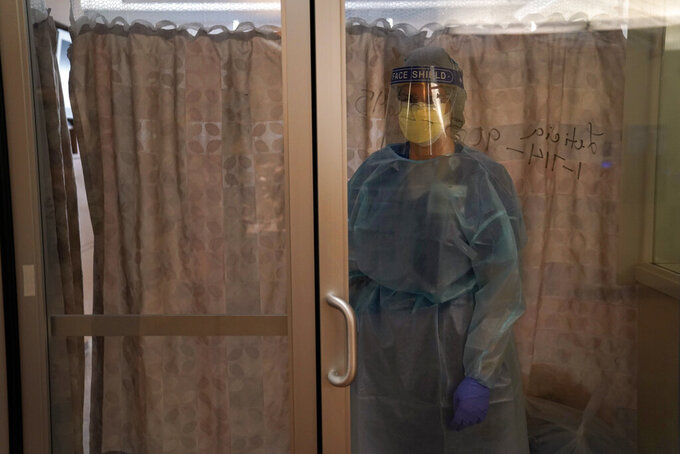 Registered nurse Merri Lynn Anderson talks to her patient with a curtain drawn between them to give the patient privacy in a COVID-19 unit at St. Joseph Hospital in Orange, Calif., Thursday, Jan. 7, 2021. California health authorities reported Thursday a record two-day total of 1,042 coronavirus deaths as many hospitals strain under unprecedented caseloads. The state's hospitals are trying to prepare for the possibility that they may have to ration care for lack of staff and beds — and hoping they don't have to make that choice. (AP Photo/Jae C. Hong)

ORANGE, Calif. (AP) — The U.S. topped 4,000 coronavirus deaths in a single day for the first time, breaking a record set just one day earlier, as governors tried to ramp up the pace of vaccinations and open the line to elderly people and others.

The tally from Johns Hopkins University showed the nation had 4,085 deaths Thursday, along with nearly 275,000 new cases of the virus — evidence that the crisis is growing worse after family gatherings and travel over the holidays and the onset of winter, which is forcing people indoors.

Overall, the scourge has left more than 365,000 dead in the U.S. and caused nearly 22 million confirmed infections. More than 132,000 people nationwide are hospitalized with COVID-19.

Britain, with one-fifth the population of the U.S., likewise reported on Friday its highest one-day count of deaths yet: 1,325. That brings the country’s toll to nearly 80,000, the highest in Europe.

Meanwhile, the number of Americans who have gotten their first shot of the COVID-19 vaccine climbed to almost 6.7 million Friday, according to the Centers for Disease Control and Prevention, a robust, one-day gain of about 800,000 after a slow start to the campaign.

The goal ultimately is to vaccinate hundreds of millions in the U.S., though health care workers and nursing home residents are getting priority in most places for now.

Faced with mounting criticism over the sluggish rollout, New York Gov. Andrew Cuomo announced Friday that starting next week, New York will allow a much wider swath of the public to get inoculated, including anyone 75 or older, teachers and first responders. New Mexico is likewise expanding eligibility to the elderly as well as people with certain underlying medical conditions.

In Arizona, a vaccination site will open Monday at the suburban Phoenix stadium where the NFL’s Arizona Cardinals play. State officials said it will be capable of vaccinating thousands of people each day. Oregon plans to dispense thousands of shots at the state fairgrounds in Salem this weekend with help from the National Guard.

In Utah, newly installed Gov. Spencer Cox unveiled a plan aimed at increasing the number of shots administered to 50,000 a week. He said he will issue an executive order requiring facilities to allocate their doses the week they are received.

The lethal surge is being driven in large part by Sun Belt states. California, Arizona, Texas and Florida together had nearly 1,500 deaths and 80,000 cases on Thursday and have been setting daily records this week, as have Mississippi and Nevada.

Many hospitals in Los Angeles and other hard-hit areas are struggling to keep up and warned they may need to ration lifesaving care. Nurses are caring for more sick people than typically allowed under the law after the state began issuing waivers to the strict nurse-to-patient ratios.

At Los Angeles County's Henry Mayo Newhall Hospital in Valencia, nurse Nerissa Black said the place is swamped with patients, likening the situation to New York's at the beginning of the pandemic.

She was assigned six patients but could spend only about 10 minutes with each of them per hour, including the time it takes for her to change her protective gear.

At St. Joseph Hospital south of Los Angeles, nurses in the COVID-19 ward described being overwhelmed as the deaths mount.

“Just today we had two deaths on this unit. And that’s pretty much the norm,” said Caroline Brandenburger. “I usually see one to two every shift. Super sad.” She added: “They fight every day, and they struggle to breathe every day even with tons of oxygen. And then you just see them die. They just die.”

About 20 physician assistants, nurses and respiratory care practitioners from the Army and Air Force were sent to Riverside University Health System-Medical Center in response to a state request to the Federal Emergency Management Agency. The 439-bed hospital normally averages 350 patients, but that is now up to 450.

The outbreak has taken another turn for the worse in Arizona, with the state now leading the nation with the highest COVID-19 diagnosis rate. Since Dec. 31, one in every 111 Arizonans has been diagnosed with the virus.