US vows to stand by ally Australia against China 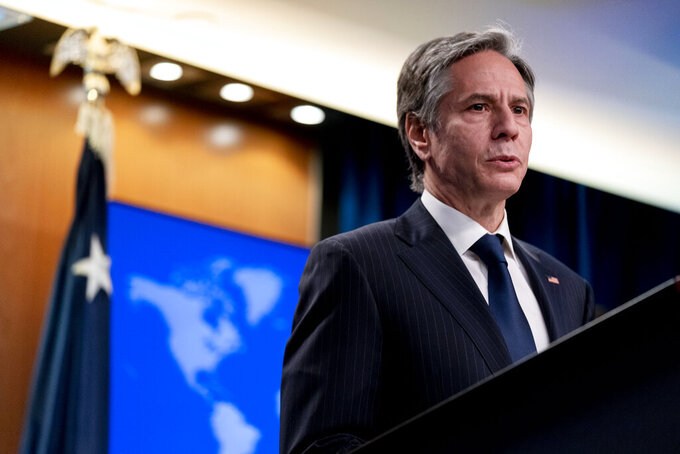 Secretary of State Antony Blinken speaks at a news conference to announce the annual International Religious Freedom Report at the State Department in Washington, Wednesday, May 12, 2021. (AP Photo/Andrew Harnik, Pool)

WASHINGTON (AP) — The Biden administration vowed Thursday to stand by Australia in its worsening trade and other disputes with China.

Secretary of State Antony Blinken told his Australian counterpart that the U.S. “will not leave Australia alone on the field — or maybe I should say ‘alone on the pitch’ — in the face of economic coercion by China.”

“That's what allies do," he said. "We have each other's backs so we can face threats and challenges from the position of collective strength.”

Blinken and Australian Foreign Minister Marise Payne both said that presenting a united front to China is key and called for a more thorough and complete investigation into the origin of the coronavirus pandemic that first emerged in China in 2019.

China last week suspended an economic dialogue with Australia, stepping up a pressure campaign that began over Australian support for a probe of the coronavirus and has disrupted exports to China’s biggest foreign market.

Relations between the two have plunged to a multi-decade low since Beijing blocked imports of Australian coal, wheat and other goods over the past year. But it has failed to force Prime Minister Scott Morrison’s government to offer concessions.

The suspension follows Australia’s decision in April to cancel two deals signed by the state of Victoria with China’s multibillion-dollar “Belt and Road” construction initiative.

Beijing warned then it might respond, which it did when it suspended the China-Australia Strategic Economic Dialogue, accusing Australia of abusing “so-called national security reasons to severely restrict and suppress economic and cultural cooperation projects.”