US Women's Open pushed to Monday because of thunderstorms 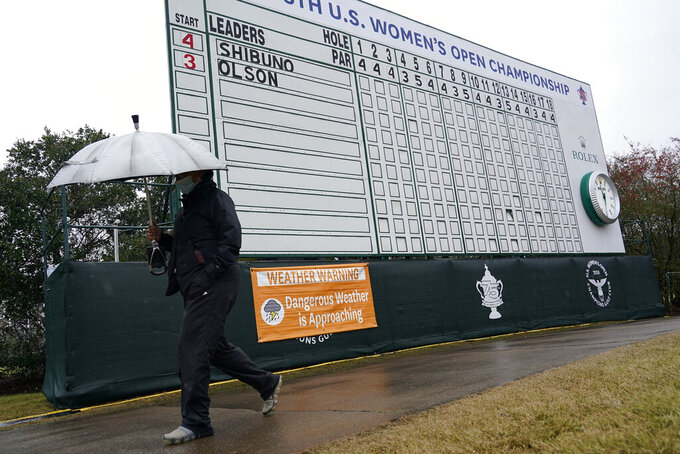 A person carries an umbrella while walking next to a sign advising that play is temporarily suspended during a weather delay in the final round of the U.S. Women's Open golf tournament, Sunday, Dec. 13, 2020, in Houston. (AP Photo/David J. Phillip)

HOUSTON (AP) — The latest U.S. Women's Open on the calendar will last one more day because of relentless rain that drenched Champions Golf Club and forced the USGA to suspend the final round until Monday.

Hinako Shibuno of Japan, who had a one-shot lead as she goes for a second major, never teed off.

The USGA moved up tee times as early as possible Sunday because of the forecast, and the final round was just over an hour old when thunderstorms in the area caused play to be stopped. It never resumed, with about three-quarters of an inch of rain falling before there was no point in trying to restart.

The turf in the December climate doesn't drain as quickly. Plus, heavy rain soaked the course Friday after the second round. There was standing water across Champions even during spells when the rain subsided.

The U.S. Women's Open was postponed from early June because of the COVID-19 pandemic.

It will be the first Monday finish for the U.S. Women's Open since So Yeon Ryu won at The Broadmoor in Colorado in 2011.

Shibuno won the Women's British Open last year in her major championship debut — and her first tournament outside Japan — and is bidding to become the third woman to win two majors the first time playing them. Se Ri Pak was the most recent in 1998 at the LPGA Championship and U.S. Women's Open.

She was at 4-under 209, one shot ahead of Amy Olson, the 28-year-old from North Dakota who has not won in her seven years on the LPGA Tour. Only two other players, Moriya Jutanugarn and Ji Yeong Kim2, were under par.

Ariya Jutanugarn, a two-time major champion and former No. 1 player in the world, made birdie on her first hole before play was stopped. That pulled her within five shots of the lead.

Forty-two players from the 66 who made the cut had finished at least one hole. The most anyone played was six holes. They will pick up where they left off on Monday; the USGA decided against calling the final round a wash and starting over.