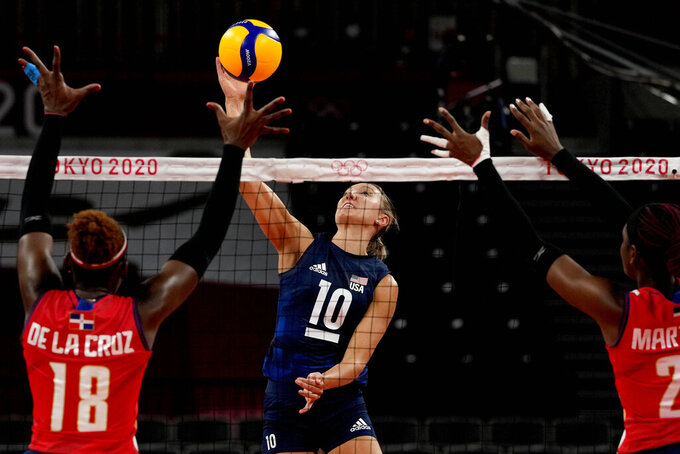 TOKYO (AP) — The Japanese-style lanterns hanging in the rooms of the U.S. women's volleyball players at the Olympics provide much more than light.

Those lanterns symbolize the strong bond that has formed between the team that built the foundation for USA Volleyball despite being denied an opportunity to compete at the Olympics and the team that is trying to deliver the first gold ever for the U.S. women.

The 1980 U.S. team adopted this year's squad after seeing similarities from the one-year delay because of the pandemic to the trauma they endured during the U.S. boycott of the Moscow Games.

“A year ago when the Games were postponed, it really hit home to us: ‘Oh my gosh, we can relate. We know what they’re going through,'” said Debbie Landreth Brown, a co-captain of the 1980 team. “So we reached out at that time and just tried to encourage them. I think just having that kind of that shared experience of being in limbo just made us really feel for them and want to reach out to them. That’s kind of where it started.”

It hasn't stopped since.

The 1980 team sent this year's version a care package before the Games featuring the lanterns, journals and Japanese bookmarks with personal inscriptions.

This year's team responded with a video thanking its predecessors for paving the way with the sacrifices they made more than 40 years ago.

Many of the players from the 1980 team got together to watch the video, with nine of them gathered last week in Colorado where they also watched the U.S. women compete in Tokyo in pool play.

“Oh my gosh, it really touched us,” Landreth Brown said. “There probably was not a dry eye in the room as we were watching. It’s just really cool just for them to express their thanks and they just said some really nice things. It was really cool for us to watch that together. I think the communication and the connection back and forth has been really special for us.”

The emotional ties between the two teams span the distance between them. U.S. coach Karch Kiraly said he got goose bumps over the gifts the 1980 players sent and the videos of them cheering his team on from back in the United States.

“Our team feels a really special bond with them and the support they’re just sending on a regular basis through this tournament," he said. "I think it was important for our team to understand a little more about the story and how they forged a new path.”

That path began when the U.S. volleyball teams were struggling in the 1970s, with both the men and women failing to qualify for the Olympics in 1972 and ’76. USA Volleyball was mostly a part-time operation back then, with players thrown together a couple of weeks before big tournaments.

But the U.S. women’s team changed that leading up to the 1980 Games in Moscow. It moved full time to Colorado Springs to train, and the results were stark.

The American women developed into one of the top teams in the world, even winning an exhibition against the Soviet Union in Moscow on the same floor where they hoped to win a gold medal in 1980.

That dream was never realized when President Jimmy Carter ordered a boycott of the Games in response to the Soviet invasion of Afghanistan.

“They had to go through something much more difficult than we can ever imagine,” U.S. captain Jordan Larson said. “We recognize that and understand that we are very privileged now and we get to do a lot of things because of what they had to sacrifice.”

The 1980 team has remained close over the years because of the pain caused by the boycott. The players have held several reunions along the way, as well as monthly Zoom calls to catch up since the pandemic began.

But most of the others opted to end their playing careers without experiencing the Olympics. So after their recent retreat they visited the Olympic museum in Colorado Springs and went through the virtual opening ceremony room that features scenes from various opening ceremonies put together.

“It’s chill bumps from the first second to the last second,” said Laurie Corbelli, who competed in 1984 when the U.S. won silver. “I got to do one for real. But I looked around at the ones that didn’t get to ever do that. There were more tears during that. It was heartbreaking for me at that moment.”

Now, as the U.S. women's team heads into the semifinals on Friday against Serbia, the 1980 team is cheering from afar with hopes that the path they set more than 40 years ago leads to gold.

“It would be great if finally a U.S. women’s team can break the silver medal hex,” said Rita Buck-Crockett, who won the first of three U.S. silver medals in 1984. “We've got to get past that and if any team can do it, this could be the team.”