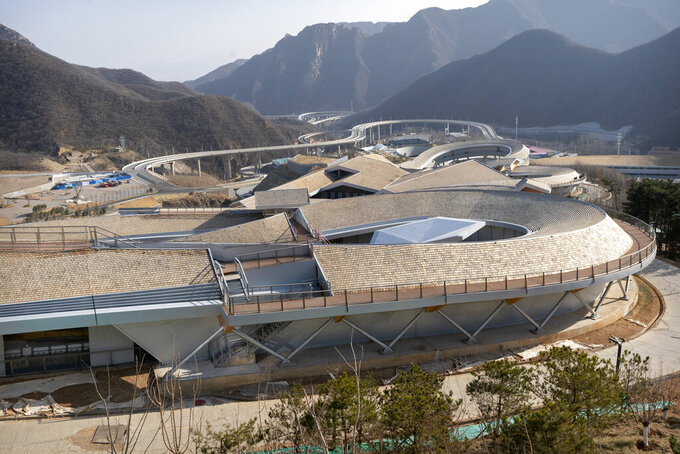 FILE - In this Feb. 5, 2021, file photo, the curving track of the National Sledding Center is seen in Yanqing on the outskirts of Beijing. Beijing organizers on Monday, Oct. 4, 2021 announced a series of new test events. This schedule comes days after organizers and the IOC published rigid restrictions at the Games for athletes and everyone else, controls that apparently have the full support of the IOC. (AP Photo/Mark Schiefelbein, File)

For USA Luge, the Olympic season is here.

It’s unseasonably warm in the Adirondack Mountains this week, which means the conditions for sliding are far from ideal and it took some extra work for the track crew to make Thursday’s training runs happen. But the significance of being the first slider on the track wasn’t lost on West.

“First run at home is always fun,” West said. “I hold Lake Placid very near and dear to my heart. I always do well here, and it’s special getting that first run. It’s good. You’re hoping and praying that they took all the shovels out of the track, and they did, so it was good.”

They weren’t the first runs of the season for U.S. sliders. The luge team got some work in earlier this month at tracks in Krasnaya Polyana, Russia and Sigulda, Latvia. And some members of the bobsled and skeleton teams are currently getting their first look at the track built for this winter’s Beijing Olympics, spending about three weeks training in Yanqing, China.

“They have thought about every detail for this track,” U.S. skeleton athlete John Daly said from China on Thursday. “I don’t think they missed a thing. The track will be tricky and make for an exciting Olympic Games.”

USA Luge will get its first look at the Olympic track next month, and the World Cup season begins in Yanqing on Nov. 20-21.

There are already some concerns. Olympic silver medalist Chris Mazdzer had surgery to repair a broken foot — an injury he suffered in Russia — and it’s unknown when he’ll be back on the ice. Mazdzer competes in singles and doubles, so his absence also means that the top U.S. doubles sled, with partner Jayson Terdiman, is off-ice as well. And women’s Olympic hopeful Brittney Arndt got a concussion in a training crash earlier this month.

“It’s tough to watch all these problems happen to these people,” West said. “But they’re all very self-reliant people and I know that they’ll come out stronger even through the problems. Obviously, you worry for them and try to help them in any way that you can, but I know that they’ll be fine.”