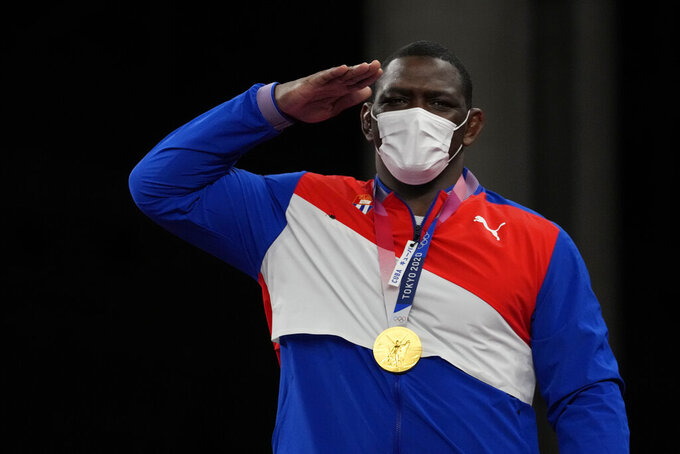 Gray is a five-time world champion, but she had never claimed an Olympic medal. She finished a disappointing seventh at the Rio de Janiero Games in 2016 while fighting through injuries that kept her out of action for a year.

She bounced back to win two more world titles and earn the No. 1 seed at the Olympics. She was confident she would join Helen Maroulis as the only two U.S. women’s wrestling Olympic gold medalists.

Even with the loss, Gray feels her legacy is safe. It was just the sixth medal for a U.S. women’s wrestler.

“A silver medal is not what I came for, but it’s what I have,” Gray said. “And I’m very proud to bring home a medal from the Olympics for Team USA. I wanted it to be a different color, but I’m also very excited about going back with some hardware.”

Rotter-Focken, the No. 2 seed, was emotional after the victory.

“It’s crazy, it’s unbelievable,” she said. “I dreamed about it for many years and I worked for this every day. It’s unreal right now. I think I need a few years to recognize this.”

Rotter-Focken scored an early point for Gray’s inactivity. She countered a shot by Gray to go up 3-0, then scored four points on a throw to go up 7-0.

“I’m a big, strong woman, and she put her hips into me and squashed me to the ground,” Gray said. “And she took advantage of some length that she has over me.”

Gray finally got on the board on a step-out with just over a minute to go. She scored two on a takedown with about 30 seconds remaining, but that was all she could manage.

She then watched her friend celebrate and carry the German flag. They both are 30 years old and have competed since their teenage years.

“Aline is a friend, and I am so proud that I got to go out on the mat and compete with her,” Gray said. “I wanted to come out on top, but she did this time. But I’m sure this will just be a friendship that blossoms even more. Maybe just not until after the world championships this year. So I hope to see her there.”

Lopez defeated Turkey’s Riza Kayaalp 2-0 in the semifinals on Sunday in a rematch of the 2016 gold medal match.

In the other final Monday, Cuba’s Luis Orta Sanchez defeated Japan’s Kenichiro Fumita 5-1 in the 60kg class. Fumita, trying to win in his home country, was the No. 1 seed and a two-time world champion.

American Tamyra Mensah-Stock, the No. 1 seed in the women's 68kg freestyle class, will wrestle for gold on Tuesday. She was tied 4-all heading into the final two minutes of a semifinal against Ukraine’s Alla Cherkasova on Monday before taking control to win 10-4. Mensah-Stock will face Nigeria’s Blessing Oborududu in the final.

American Ildar Hafizov was trying to earn a spot in the bronze medal match in the Greco-Roman 60kg category. He led No. 2 seed Sergey Emelin of the Russian Olympic Committee 1-0 after the first period but was overwhelmed in the second and lost 7-1. Emelin won a bronze medal.

In Greco-Roman 97kg, American G’Angelo Hancock beat Mihail Kajaia of Serbia 5-1 in his opener. In his quarterfinal against Poland’s Tadeusz Michalik, with the score tied at 1, Michalik got a point on a step-out. The U.S. challenged and lost, giving Michalik another point. Michalik held on and won 4-3.