USC back at practice, on track to play after positive tests 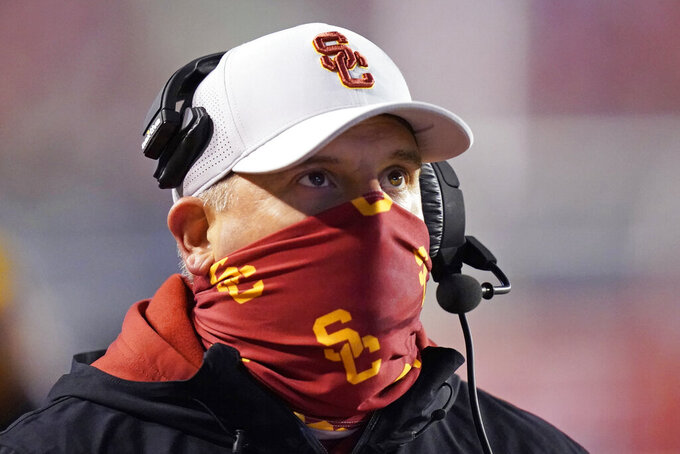 LOS ANGELES (AP) — Graham Harrell hoped to spend Tuesday coaxing more big plays out of the Southern California offense. Todd Orlando wanted to make sure his defense carried the same level of intensity over for a second straight week.

No. 19 USC got back to work as usual Wednesday, and the Trojans are on track to play Colorado on Saturday if the program’s additional testing goes well.

An unnamed USC player tested positive and became symptomatic after traveling to the Trojans’ win at Utah last weekend. USC (3-0, 3-0 Pac-12) then had a second positive test from follow-up testing, the school said in a statement Wednesday. That player is not symptomatic.

Five other players are in quarantine because of contact tracing, but the school does not expect those absences to keep the Trojans from playing against the Buffaloes (2-0, 2-0) on Saturday, barring additional positives from testing later this week. After canceling practice Tuesday and holding meetings remotely, the Trojans resumed practice Wednesday.

That qualifies as good news for the only Pac-12 South team to play all of its scheduled games so far, one of three teams to do so for the conference as a whole.

For Harrell, the good results meant he could get back on the practice field. In his second season running the USC offense, Harrell has gotten adept at breaking down film on video calls. But it’s no substitute for the real thing to him.

“I’m a guy that believes in practicing, and practicing a lot, so it’s frustrating when you can’t get out on the field and work with ‘em,” Harrell said.

Orlando, who in his first season overseeing the defense, chose to look at the potential benefits of skipping that one day.

“I’m kind of a ‘glass half full’ guy,” Orlando said. “Maybe yesterday we were gonna have a full-fledged practice and somebody was gonna get hurt. Maybe kids had more time for their finals. Maybe people got more sleep.”

Orlando might also be in a better mood because the Trojans dominated on his side of the ball, forcing five turnovers and allowing two touchdowns in the 33-17 win over the Utes.

Harrell’s group continued to have issues generating explosive pass plays and consistent gains in the run game. Quarterback Kedon Slovis had three pass plays longer than 20 yards among his 35 attempts, continuing a season-long power outage as opponents seem determined not to give up the deep ball.

Even a Utah defense known for its physical man coverage played zone and kept USC’s receivers in front of them.

“I don’t know if it was because of the success we had against the man coverage they played on us last year or if it was because they have a really young defense but, you know, we went in expecting them to play a decent amount of man because that’s kind of in their DNA. And, besides short yardage situations, I don’t know if we got a single snap of it, you know,” Harrell said.

USC got its longest play of the game on a 47-yard rush by sophomore Kenan Christon, but nine of its 26 carries by a running back resulted in no gain or a loss. Harrell thinks the offense is doing enough things well that those issues running and passing will start to resolve themselves, perhaps as soon as this week against a Colorado defense that has allowed 74 points and 12 plays of 20-plus yards through two games.