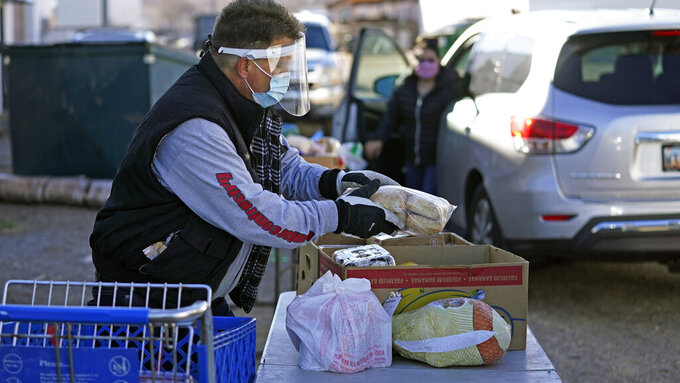 Food is loaded onto tables for those in need outside of the Catholic Community Services of Utah Friday, Nov. 20, 2020, in Ogden, Utah. As coronavirus concerns continue, the need for assistance has increased. (AP Photo/Rick Bowmer)

There were 545 people hospitalized for COVID-19 in Utah on Monday, and referral center ICU beds reached 91.9% occupancy statewide, according to state data. The increased number of hospitalizations has prompted doctors and public health officials to advise against attending large Thanksgiving gatherings.

Herbert, a Republican, said he will not extend his previous two-week order that required people to limit social gatherings to people in their immediate household but urged caution. He recommended masks, social distancing and smaller gatherings for the holiday.

“You increase the risk when you bring people into your home,” he said during a press briefing. “That’s just the harsh reality.”

Rich Saunders, the interim director of the state health department, recommended that people in high transmission areas, which include 26 of the state’s 29 counties, limit social gatherings to 10 or fewer. The state’s mask mandate will remain in place.

In Utah, 1 in 135 people were diagnosed with COVID-19 in the past week, and the state is ranked tenth in the country for new cases per capita, according to data from Johns Hopkins.

The state's seven-day average of new daily cases continued to climb to 3,349 per day. In the past week, 23.6% of people tested have received a positive result. State Epidemiologist Dr. Angela Dunn said the positivity rate is starting to stabilize because of a push to increase testing.

There have been over 179,000 reported virus cases in Utah and 797 known deaths related to the virus, according to state data.

For most people, the new coronavirus causes mild or moderate symptoms, such as fever and cough that clear up in two to three weeks. For some — especially older adults and people with existing health problems — it can cause more severe illness, including pneumonia, and death.