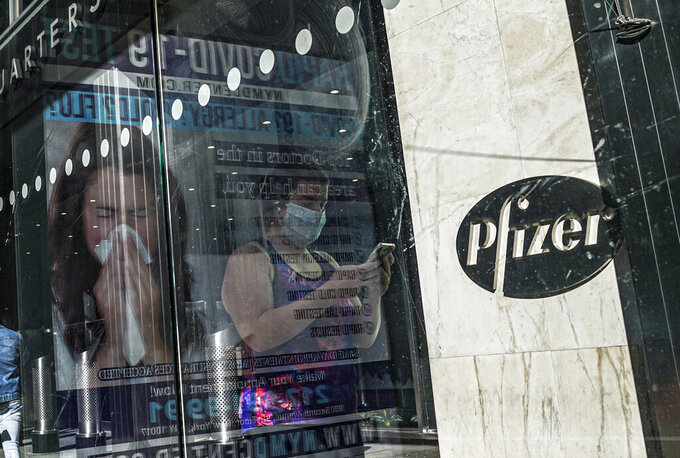 FILE - In this Nov. 9, 2020, file photo, an ad for COVID-19 testing reflects on glass at a bus stop, as pedestrians walk past Pfizer world headquarters in New York. BioNTech has at times been portrayed as the junior partner to U.S. pharmaceutical giant Pfizer in the race to get approval for their COVID vaccine, but the company's gene technology was key to the rapid development of the vaccine that British regulators have approved for emergency use Wednesday Dec. 2, 2020. (AP Photo/Bebeto Matthews, FILE)

MAINZ, Germany (AP) — The email that arrived in the ancient German city of Mainz shortly before 1 a.m. in the morning marked a turning point in the global effort to deliver a reliable vaccine against the coronavirus pandemic - and for the little-known biotechnology company that helped develop it.

BioNTech has at times been portrayed as the junior partner in U.S. pharmaceutical giant Pfizer's race to get approval for the COVID-19 vaccine a pandemic-weary world is desperately waiting for. In fact, the company's use of gene technology to beat the virus was key to the rapid development of the vaccine that British regulators OK'd for emergency use early Wednesday.

Founded by scientists 12 years ago, BioNTech specializes in harnessing so-called messenger RNA, or mRNA, to train the immune system to attack hostile invaders, from viruses to tumors. Until now, the technology had never been approved for a drug in humans, but the company's founders said they immediately saw the potential when the virus first emerged early this year.

“When we understood that this outbreak in China could become a global pandemic we felt the obligation to start vaccine development," BioNTech's Chief Executive Ugur Sahin told The Associated Press in a recent interview.

“We have technologies in place which allow us to make vaccines and evaluate candidates in an ultra-fast fashion,” he said.

But Sahin, who came to Germany from Turkey with his parents as a young child, said he and his colleagues also understood they didn't have the means to roll out mass trials of vaccine candidates with tens of thousands of participants, a key part of testing whether the shot would be both effective and safe.

“It was very clear from the beginning that we need to to go into a collaboration,” said Sahin.

He quickly reached out to Pfizer, with whom BioNTech had previously started work on a flu vaccine, and researchers at the two companies began working together even before commercial contracts had been signed.

“This trust-based relationship is one of the key factors why we have been so fast, because it allowed allowed us to share data, to share information, to start to avoid any type of delay,” Sahin said.

What followed was a flurry of activity as BioNTech and Pfizer raced rivals such as Johnson & Johnson, AstraZeneca and Moderna to become the first to get emergency authorization for a COVID-19 vaccine. Unlike rivals in China and Russia, all of the companies have followed the established path of conducting trials in three stages, publishing results as they go along and submitting them to independent regulators for review.

While authorities in the United States, Britain and the European Union indicated they would make a decision before the end of the year, it wasn't clear who would be first until U.K. authorities announced they'd approved the BioNTech-Pfizer shot Wednesday.

“It was (an email) very early this morning, in the early, early hours from the regulators saying we had received approval,” BioNTech's Chief Commercial Officer, Sean Marett, told The AP.

Marett, a soft-spoken Brit with long experience in the pharmaceutical industry, said the company hasn't had time to celebrate yet.

"We’re too busy worrying about packing boxes for the U.K.,” he said, adding that the first shipments would likely hit the road in the coming 24 to 48 hours.

Marett dismissed suggestions that British authorities might have taken shortcuts, saying they had asked "very, very deep questions and detailed questions, just like any other agency.” The U.S. Food and Drug Administration has indicated it may decide on the company's submission next week, while the European Medicines Agency plans to meet by Dec. 29 to discuss the vaccine approval request.

BioNTech — whose Mainz headquarters is located on a street called “An der Goldgrube,” or “At the Gold Mine” — hopes sales of the vaccine will more than cover the cost of development and production. Together with Pfizer and Chinese distributor Fosun Pharma, it aims to ship at least 1.3 billion doses of the COVID-19 vaccine in 2021.

“We’re a biotechnology company, loss-making, and of course we need to generate some money so we can keep in business,” he said.

Ashtyn Evans, a senior health care analyst at Edward Jones, said Pfizer and BioNTech are expected to make a profit from vaccine sales, at least in the short term.

“Long term is another question,” said Evans. “The amount depends on whether the contracts are extended.”

Marett said BioNTech, which currently has 1,800 staff, expects to grow in the coming years and that its focus will remain on pushing developing new drugs. Sahin, who co-founded BioNTech along with chief medical officer Ozlem Tureci, his wife, said that along with a flu vaccine the company is also developing with Pfizer, it is working with others on a dozen different shots, including for HIV and tuberculosis.

“BioNTech stands for Bio New Technologies, and that’s what fascinates us about what we can do, really use new technologies to address disease,” Marett told The AP. “We’ve hopefully demonstrated, at least with the first approval, that that approach may be useful to society.”