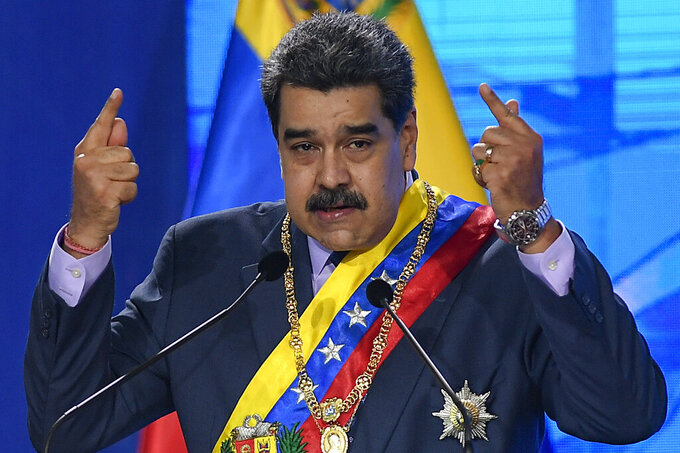 The socialist government of Nicolás Maduro and the U.S.-backed opposition are accusing each other of playing politics with proposals to finance United Nations-supplied vaccines — so far blocking any option from going ahead.

But the opposition led by Juan Guaidó opposes that plan — a stance that scuppers any movement until Britain's Supreme Court decides the thorny question of who is Venezuela's legitimate president, with oversight of its assets.

The opposition says Maduro can’t be trusted to fairly distribute the vaccine and contends the government's real aim is to create a precedent allowing it to access the funds, which includes billions in gold ingots stored at the Bank of England, that has been frozen by British courts — equal to a third of the nation's foreign currency reserves.

The opposition has instead proposed tapping similarly embargoed funds it has access to in the U.S. and deploying monitors to make sure distribution of the vaccine isn't used as a cover for political patronage — a potential victory for Guaidó's faction since Maduro has effectively shut it out of power within Venezuela's borders.

The acrimonious posturing has already led Venezuela to miss a December deadline to make an $18 million down payment on vaccines to the U.N. The high-stakes tug of war means Venezuelans are likely to continue suffering the effects of the virus even as vaccine rollouts begin elsewhere in Latin America, with the only possible help coming from the Sputnik V vaccine provided by Maduro's staunch ally Russia.

It also underscores the new Biden administration's challenges in bridging the divisions that have exacerbated a humanitarian crisis overwhelming the country’s neighbors, who have absorbed more than 5 million Venezuelan migrants in recent years.

“It’s not enough to allocate blame,” said Francisco Rodriguez, a Venezuelan economist behind Oil for Venezuela, a U.S.-based group advocating for greater assistance to the most vulnerable. “To actually resolve the problems, both sides need to show a willingness to cooperate so that the Venezuelan people are not collateral damage in this political conflict.”

The vaccine fight came to light as part of a courtroom battle between Maduro and Guaidó over control of the gold at the Bank of England. The U.K.’s Supreme Court in December agreed to hear the case, which hinges on who Britain recognizes as the Venezuela’s legitimate leader: the one Prime Minister Boris Johnson's government says it backs — Guaidó — or Maduro, with whom it maintains tense diplomatic ties.

In September, Maduro’s health minister agreed to purchase 11 million doses of vaccines in the first round of the U.N.-backed program, known as COVAX, which seeks to buy and distribute vaccines to more than 100 countries. Under the terms, it was required to make a down payment of over $18 million by Dec. 15 and provide financial guarantees for another $101 million.

“Regrettably, due to the impact of the U.S. government sanctions, it has not been possible for Venezuela to meet either of those obligations,” lawyers for Maduro’s central bank, London-based Zaiwalla & Co., said in a Dec. 23 letter sent to counsel for Guaidó in which they proposed the proceeds from a gold swap with Deutsche Bank be used to pay for the vaccines.

Six days later, Guaidó’s attorneys rejected the plan, arguing that other payment mechanisms exist, including funds that were seized by the Trump administration and that have already been used to provide cash bonuses for underpaid health workers on the front lines of the raging medical crisis.

While Maduro’s government claims that Western banks refuse to process Venezuela’s payments, Guaidó’s attorneys said humanitarian aid isn’t impeded by U.S. sanctions and the Treasury Department specifically exempts any COVID-related assistance. The U.S. government has already provided $1 billion to mitigate the effects of the nation's crisis, both in Venezuela and across the region, including $47 million to support water and sanitation, case management and disease surveillance in response to the COVID-19 pandemic.

“Very clearly Maduro is trying to get his nose under the tent so he can grab the gold,” said Vanessa Neumann, who was Guaido’s envoy to London until November. “This is about creating a legal precedent. But using international guilt over COVID and suffering of the Venezuelan people is a deplorable way to go about it.”

A copy of the letters was provided to the AP by a public relations firm representing lawyers for Maduro's central bank.

Miguel Pizarro, a humanitarian aid coordinator for Guaidó, said monitoring of vaccine distribution by the Roman Catholic Church and civil society groups is key after Maduro’s government broke an agreement reached last June with the Pan American Health Organization, or PAHO, to combat the virus jointly with the opposition.

The deal, hailed at the time as a rare respite from the nation’s winner-take-all politics, called for the delivery of protective gear and COVID antigen testing kits using offshore funds controlled by Guaidó, according to Pizarro.

But upon the arrival of the supplies in October, the government took control of the tests and it’s unknown if they were ever distributed to the 27 hospitals selected to receive them, according to Pizarro. PAHO, the regional office for the World Health Organization in the Americas, said this week that only 3,000 of the 340,000 tests sent to the country have been used.

“We don't know what happened to the tests,” said Pizarro. “But clearly Maduro can’t be taken at his word.”

Venezuela’s government has reported 1,122 deaths from 121,691 cases of coronavirus, one of the lowest infection rates in the region, a sign the virus hasn’t hit as hard as feared in a country with a collapsed health care system and where hospitals lack basic supplies like running water and syringes. Medical groups opposed to the government put the death toll four times higher, but still well below the rate of countries like neighboring Colombia, which has recorded nearly 50,000 deaths.

But Venezuela risks falling behind the world in vaccinating health workers and the most-vulnerable populations. Ciro Ugarte, director of health emergencies at PAHO, said this week that the deadline to join the COVAX program had passed and Venezuela's ability to acquire the vaccine through the Washington-based group's revolving fund was also blocked until it pays off a $11 million debt.

The haggling is of little interest to regular Venezuelans, who will take relief from wherever it comes. For now, that's likely Russia, from which Maduro has said he'll acquire 10 million doses.

Peter Contrera, 40, said he’s still not sure whether he trusts the science behind the Russian-made vaccine, which hasn't been approved by the World Health Organization or other strict regulatory agencies. He also doubts it will ever reach common folks like him when it does arrive.

“Supposedly, a shipment is coming to Venezuela,” said Contrera, who buys and sells food products and car parts to support his family. “I don’t understand whether it’s for the government or for the people.”

Contrera, who doesn’t align himself with either side of Venezuela’s polarized politics, was sitting on a bench in front of a public hospital in a poor hillside neighborhood of Caracas, waiting to deliver clean sheets and food for his 73-year-old father, who was hospitalized a week ago with COVID-related pneumonia.

“Right now, I don’t know anything about its effects,” he said of the vaccine. “Somebody needs to explain it to me.”