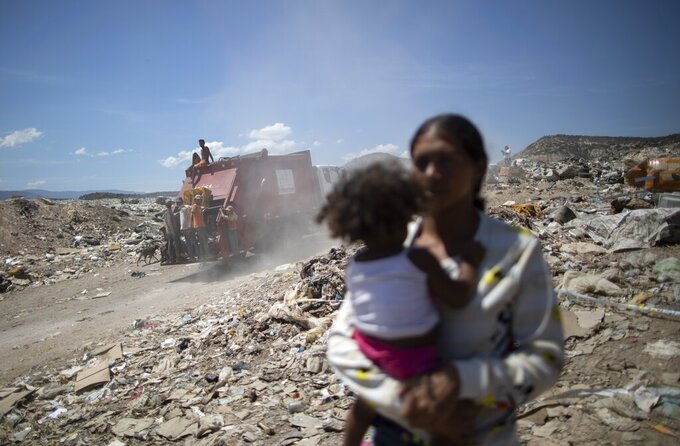 Youths looking for valuable items in the trash to resell ride on the back of a garbage truck entering the Pavia garbage dump on the outskirts of Barquisimeto, Venezuela, Wednesday, March 3, 2021. Annually, about 14% of the world’s food ends up in the garbage, even before it reaches the market, according to figures from the Food and Agriculture Organization of the United Nations, but now in Venezuela, extremely high costs push people to reconsider what they throw away. (AP Photo/Ariana Cubillos)

BARQUISIMETO, Venezuela (AP) — For some children in Venezuela, garbage is the main source of their livelihood.

This has been the case for several generations of garbage collectors in Venezuela, among them Ronaikel Brito, 16, who, like his mother when she was a child, and before her, her grandmother, looks for something of value every day in a landfill on an arid plain about five hours west of the capital, Caracas. But their work has never been so challenging: The nation’s acute economic crisis coupled with stay-at-home orders prompted by the coronavirus pandemic have reduced trash output, making valuable findings rare.

“The reality today is that you don’t get as many things as before,” Ronaikel told The Associated Press at the landfill in Pavia, outside the city of Barquisimeto.

“I go searching to see what I get, but I get almost nothing,” he added, noting that in recent months the children and adults who sift through garbage are spending more time trying to find objects they can sell or food in good enough condition to eat or feed horses, goats or pigs.

Waste has been drastically reduced during the pandemic, particularly food from homes, restaurants and wholesale markets. That was trash was coveted by garbage pickers in Barquisimeto, once a thriving agro-industrial city where food waste was notable.

Annually, about 14% of the world’s food ends up in the garbage, even before it reaches the market, according to figures from the Food and Agriculture Organization of the United Nations. In Venezuela, in addition to the large amounts of food, tons of aluminum containers and clothing were thrown away. Furniture, stoves and refrigerators ended up in the trash, too, because it was cheaper to buy new things than to repair them.

Now, extremely high costs push people to reconsider what they throw away.

Venezuela is mired in a deep political, social and economic crisis, which many critics attribute to two decades of socialist governments that have left the once-rich oil country bankrupt. The country is also in its sixth year in recession, and its residents are dealing with soaring food prices set in dollars, low wages and four-digit inflation, condemning millions to live in poverty.

The crisis has forced almost five million people to leave Venezuela in recent years in search of better living conditions. But for many who stayed — adults and children alike — rummaging through garbage in search of food scraps or valuable items has become an increasingly common activity.

Due to the contraction of the economy and the difficulties of leaving the country due to the pandemic, there are more people who under “other circumstances would have left,” said Henkel García, director of the Econometric consulting firm.

Longtime garbage pickers are finding “equal or less” usable garbage because more people are competing for it, García said. He added that in about eight years, only about a quarter of the consumption that Venezuela had in 2013 and 2014 may remain.

It is quite likely that Venezuelans “are hitting bottom,” he said.

Due to the pandemic and “the situation in the country, people are not throwing away almost anything right now because they don’t get to throw away as before,” said Marbelis Brito, the mother of Ronaikel and seven other children who have lived almost all their lives near the Pavia landfill. Ronaikel began to help his mother sift through garbage when he was five years old.

Compared to other places, “here you can get anything, whatever we eat, whatever comes out there” is profitable, Brito, 35, said.

In Pavia, few follow pandemic-related guidelines. People rarely wear masks and virtually no one is aware of maintaining physical distance. Most clean their hands with limitations because water is also scarce here.

Unconcerned about contracting the coronavirus, Ronaikel makes his way through the dusty streets to get to the landfill as soon as the sun comes out. He carries a metal bar with a sharp tip, a sack to keep whatever he finds, and the hope of another stroke of luck, like when three weeks ago he found gold in the trash and made $20 selling it.

Brito, however, would like her children to participate in other activities.

“I did not want the same as me to happen,” she said. But “the work as garbage collectors falls on them as a natural activity in order to help support the family.”