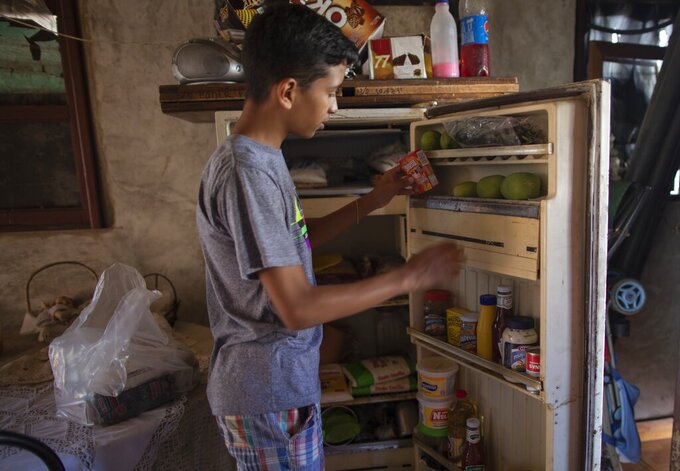 Samuel Andres Mendoza, 14, places his snacks in a rundown fridge at his home in Barquisimeto, Venezuela, Tuesday, March 2, 2021. In a crisis-wracked country where workers earn an average of $2 per month, the sales of Mendoza's drawings can make a big difference for a family budget strained by his need for high-protein foods to deal with a form of malnutrition. (AP Photo/Ariana Cubillos)

BARQUISIMETO, Venezuela (AP) — Samuel Andrés Mendoza carefully chooses from dozens of colored pencils spread out on his kitchen table, humming a reggaeton song as he deftly applies contrast to the Dragon Ball anime character taking shape on his sketch pad.

It is not just a pastime anymore for the 14-year-old. Without his mother's knowledge, he began selling his drawings on his Twitter page to help the family get by and to pay for a special diet doctors say he needs in Venezuela's troubled economy.

“Hi. I’m Samuel, I’m selling my drawings for $1 to help my mom with my diet, buy her a house and a shop so she won’t work on the street and get sick with COVID-19 and buy peanut butter for me. Thank you, sir and madam,” he tweeted along with photos of four drawings.

It caught the eye of many and he now has more than 15,000 followers, selling dozens of drawings he has worked up at a table between a worn-out couch and a rusting refrigerator in the small family home in Barquisimeto, about five hours west of Venezuela’s capital, Caracas.

“The truth is I did not know that I was going to draw like that, but time has passed, and I have managed to paint for real,” Samuel said this month, showing his finished drawing of Dragon Ball's Goku. “And here it is.”

In a crisis-wracked country where workers earn an average of $2 per month, his sales can make a big difference for a family budget strained by his need for high-protein foods to deal with a form of malnutrition.

Like millions of other Venezuelans, Samuel and his mother, Magdalena Rodríguez, emigrated in search of better conditions. They went to Colombia in 2019 when widespread power outages hit her homeland just as she learned of her son's diagnosis.

But they came home in December after she lost her job and found increasing prejudice against the growing number of Venezuelan migrants.

The mother of three now sells snacks from a table in Barquisimeto's main plaza. She also found work as a cleaner. Still, it has been difficult to afford the relatively expensive high-protein foods needed by her son, who also has a diagnosis of Asperger syndrome, a broad branch of the autism spectrum.

Rodriguez, 38, discovered Samuel’s effort when he asked for her bank account information so that people could pay for his work.

Samuel, who said he began drawing at age 5, has an inclination for anime characters, but has also portrayed soccer superstar Cristiano Ronaldo and the animated SpongeBob SquarePants.

Venezuelan artist Oscar Olivares, who runs an art academy, saw Samuel’s tweets and gave him a scholarship to study drawing. Social media followers have also gifted him a laptop, a set of artists' pencils — and peanut butter, a good source of protein.

Samuel, who said he may raise his prices as his skills advance, would like to make YouTube-style videos about videogames when he grows up.

“I’m proud of him, really. I don’t have words,” Rodríguez said. “But I do feel angry sometimes, I feel helpless, because I think that at his age, he should be studying, learning, and not wanting to work to help me, when I’m the one who has to do everything possible to give them comfort and nourishment.”

This story has been corrected to show that the teen's last name is Mendoza.