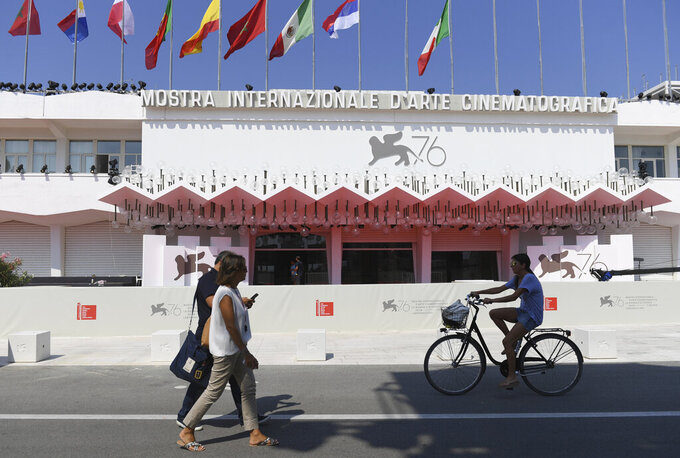 The American frontier drama “The World to Come,” the Jim Broadbent and Helen Mirren comedy-drama “The Duke,” Gia Coppola’s “Mainstream,” and the Shia LaBeouf and Vanessa Kirby drama “Pieces of a Woman” are among the films set to premiere at the Venice International Film Festival in September, the first major event of its kind since the coronavirus pandemic forced the cancellation of large gatherings worldwide, organizers said Tuesday.

The selections for the 77th edition, which launches Sept. 2 on the Venice Lido, are more global and less packed with star-studded Hollywood features than in years past as a result of the ongoing virus outbreak, festival director Alberto Barbera acknowledged.

“This year, to borrow Bob Dylan’s words, the program contains multitudes: of movies, of genres, of points of view,” Barbera said at a Tuesday morning news conference. “There will be auteur films, comedies, documentaries, horror flicks, gangster movies, and so on."

Films premiering in competition include Chloe Zhao’s “Nomadland;” Nicole Garcia’s “Lovers,” with Stacy Martin; Susanna Nicchiarelli's “Miss Marx,” with Romola Garai as Karl Marx's daughter Eleanor; and Mona Fastvold’s “The World to Come,” about two women who forge a connection in isolation in the mid-19th century. Based on Jim Shepard’s short story, it also stars Kirby, best known for playing Princess Margaret in “The Crown,” Katherine Waterston and Casey Affleck.

Barbera noted that almost half of the competition film selections this year are directed by women. The festival has had notoriously poor gender parity in the past.

The films this year, Barbera said, “were selected exclusively on the basis of their quality and not as a result of gender protocols. This is an unprecedented percentile which we hope augurs well for a future cinema that is free of any sort of prejudice and discrimination.”

Cate Blanchett will be presiding over the main competition jury alongside filmmakers Joanna Hogg, Veronika Franz, Christian Petzold and Cristi Puiu, actor Ludivine Sagnier and writer Nicola Lagioia. They will together decide on the coveted Golden Lion award, which last went to Todd Phillips’ “Joker.”

Gia Coppola's “Mainstream,” with Andrew Garfield and Maya Hawke, will debut in the Horizons section, which spotlights newcomers.

The festival will implement various modifications due to ongoing concerns about COVID-19, including a slightly slimmed-down official competition, a reduced number of sections and the addition of two outdoor screening venues, in addition to its traditional venues. Organizers said they will also be adhering to safety measures established by local authorities.

“Until a short while ago, even the certainty of maintaining the late-summer appointment with Venice’s Festival was anything but a given,” Barbera said.

And it will be a decidedly different festival than in the past couple of years, where A-List stars from Brad Pitt to Lady Gaga have put on their finest for red carpet premieres. Netflix, which had a major presence last year with “Marriage Story,” “The Laundromat” and “The King," is also absent this year.

“A few spectacular movies will be missing, blocked by the lockdown which still affects the programming of the most-awaited Hollywood releases. A few cast members of the invited movies won’t be able to attend because of the ongoing limitations on intercontinental travel,” Barbera said.

Attendees are also likely to be mostly European this year due to continuing travel restrictions and quarantine requirements. Italy was an early epicenter of the virus outbreak.

But the show will go on.

“The decision to hold the 77th edition of the Venice Film Festival is experienced like a sign of confidence in — dnd concrete support of — the world of film and the audiovisual industry,” Barbera said.

The festival will open with an Italian film for the first time in over a decade: the marital drama “The Ties,” from director Daniele Luchetti and starring Alba Rohrwacher will premiere on the Lido on Sept. 2. It runs through Sept. 12.

COVID-19 has massively disrupted the film festival circuit, a major launching pad not only for awards contenders but also for films looking for buzz and distribution. Cannes and Telluride were cancelled and others like Venice and the Toronto International Film Festival have had to get creative and scale back where possible in order to proceed. Some have even formed alliances to benefit all instead of fighting for exclusive, high-profile premieres. Case in point, Chloe Zhao’s “Nomadland,” starring Frances McDormand, will premiere across the major fall film festivals — Venice, Toronto, Telluride and New York.