Vermont is 1st state to vaccinate 80% of eligible population 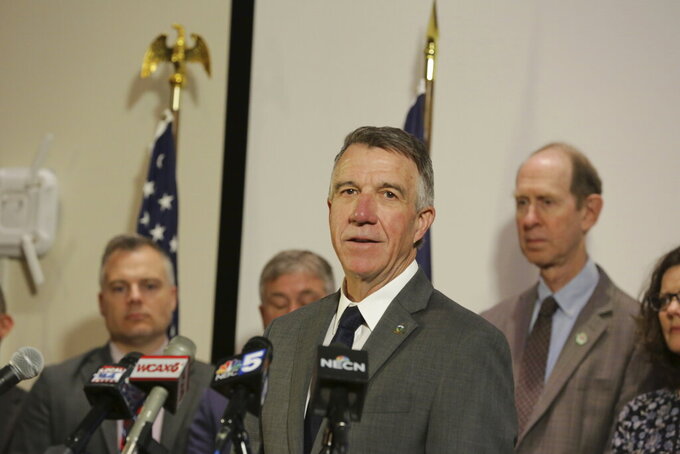 Vermont Republican Gov. Phil Scott announces on Monday June 14, 2021 in Montpelier, Vt., that the state had reached its goal of vaccinating 80% of the eligible population. As a result Scott lifted all remaining COVID-19 restrictions that were imposed to deal with the pandemic. (AP Photo/Wilson Ring)

MONTPELIER, Vt. (AP) — Vermont became the first state in the country to vaccinate at least 80% of the eligible population, prompting Gov. Phil Scott to lift all remaining state COVID-19 restrictions.

Vermont crossed the threshold on Sunday when the state vaccinated 1,151 people, reaching a level of 80.2% of those over age 12 with at least one shot of the vaccine. The goal was reached 15 months after the Republican governor declared the state of emergency on March 13, 2020.

The state has now vaccinated 81.1% of the population over 18, exceeding President Biden’s goal of 70% of those 18 and older.

“There is no doubt, each of us, every single Vermonter, has been through a lot over the last 15 months," Scott said.

He added: “Our state has shown the world what’s possible when you have a group of people with the right attitude, following the data and trusting medical science."

Even though the immediate goal has been reached, Vermont's vaccine push is not done and the state will continue vaccinate as many people as possible.

“Because every shot given today, tomorrow, and in the weeks to come is just as important as the ones we administered yesterday,” Scott said.

To accomplish the goal, the state sent vaccination teams across Vermont state parks, race courses, and any locations where people gathered to find more people who needed the vaccine.

Reaching the 80% vaccination level of those over age 12 helps minimize the spread of the virus between people and throughout the community, Vermont Health Commissioner Dr. Mark Levine said at the news conference.

As a result, there will be fewer hospitalizations and it will help prevent more loss of life from COVID-19.

Levine said it’s hoped that later this year, the vaccine will be approved for use in children under age 12. He said he was working with pediatricians to be ready to administer the vaccine to children when it becomes available.

While the state restrictions have been lifted, federal restrictions, such as mask requirements in airports and other forms of public transportation remain. The legal state of emergency will be allowed to expire at midnight Tuesday when it would have been up for renewal.

Vermont businesses will be allowed to require customers to wear masks, which Scott equated to the “no shirt, no shoes, no service” mandate used at many retail establishments.

The end of the restrictions in Vermont come as the state has seen a steady decline in COVID-19 cases. On Monday, Vermont reported one new case of COVID-19. The state had one fatality in the last month.

This story has been corrected to show that restrictions are lifted immediately, not at midnight Tuesday.