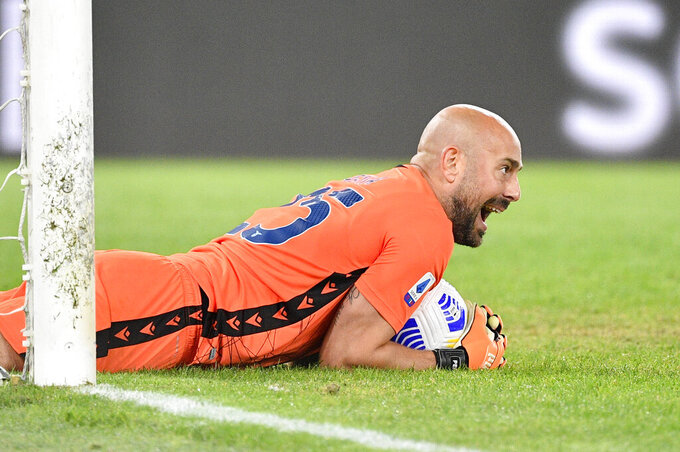 Manuel Jose Reina of Lazio holds the ball during the Serie A soccer match between Lazio and Bologna at the Rome Olympic Stadium Saturday, Oct. 24, 2020. (Fabrizio Corradetti/LaPresse via AP) 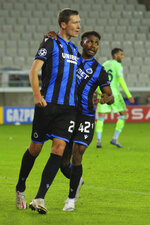 BRUGGE, Belgium (AP) — Veteran goalkeeper Pepe Reina produced a couple of decisive saves to help Lazio to a 1-1 draw at Brugge in their Champions League match on Wednesday.

The 38-year-old Reina was given a starting role in the absence of Thomas Strakosha. With Brugge pushing hard to break the stalemate in the second half, Reina's pedigree and experience helped keep the visitors afloat.

“We suffered and defended with everything we had in the second half," Reina said. “The draw is a fair result."

The game was played without fans following a government decision to reintroduce a spectators' ban at sporting events in a bid to slow down a new surge of COVID-19 infections in the country. The virus also played havoc with Lazio's preparations as the Serie A side traveled to Belgium without several key players, including top striker Ciro Immobile.

There was a cautious start and neither side created clear-cut chances in the first 10 minutes. Seeking a first home win in the group stage in almost 15 years, Brugge gradually took control, only to be caught cold by Joaquin Correa's opener in the 14th minute. The forward was left unmarked outside the box and made the most of the slack defending to fire a precise shot past Brugge goalkeeper Simon Mignolet.

The goal did not demoralize the hosts, who had a good chance to level 10 minutes later after Krepin Diatta accelerated down the right flank and found Charles De Ketelaere in the box, but the midfielder lost his balance and shot wide.

Lazio closed the spaces well but gave up a penalty just before the interval after Spanish right-back Patric tackled Mats Rits round the waist. Referee Anthony Taylor consulted VAR, awarded the penalty and Hans Vanaken sent Reina the wrong way to level the score in the 42nd.

Brugge enjoyed a good spell after the break. Emmanuel Dennis was set up with a through-ball and came close as he directed a shot between Reina's legs, but the Lazio 'keeper squeezed his knees and diverted the chance away. The former Liverpool goalkeeper was decisive again in the 64th when he parried a fine header from Rits with a diving save. Brugge created two more chances in the following minutes but could not find a way through.

Mignolet was as important for Brugge, winning a one-on-one with Sergej Milinković-Savic at the conclusion of a counter-attack in the 77th to keep the teams level.