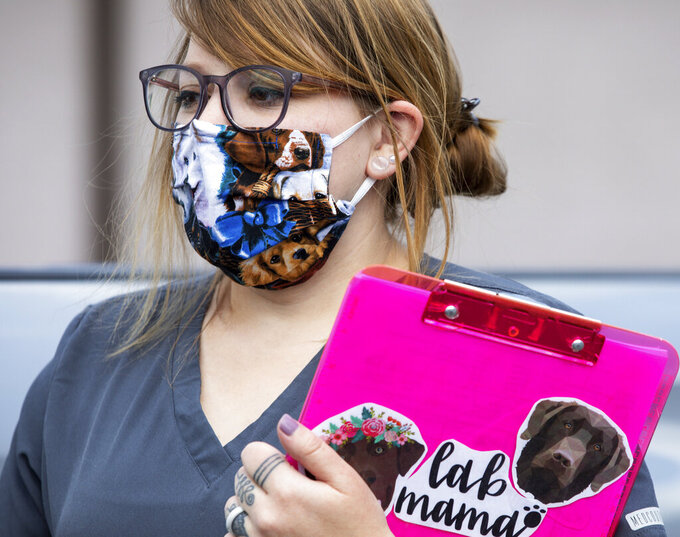 In this Thursday, May 21, 2020, photo, vet technician Savanah Hendershott wears a mask her father-in-law made her while talking with a pet owner at Sugar House Veterinary Hospital in Salt Lake City. The facility's lobby remains closed amid the coronavirus pandemic, and pet owners are asked to call the hospital and wait in the parking lot for a technician to walk their pets inside and return them after their appointment. (Ivy Ceballo/The Deseret News via AP)

SALT LAKE CITY (AP) — Pepper was a bit under the weather after eating a cheeseburger that had been slipped to him by the grandkids.

Willie needed his staples out of his paw after he had a skin tag removed.

Blue had a rash, needed her paw checked and had a follow-up appointment after being spayed.

While their people would ordinarily accompany them into waiting and exam rooms as veterinarians at Sugar House Veterinary Hospital tend to their needs, they now must remain in their cars due to social distancing guidelines necessitated by the COVID-19 pandemic.

This is what the “new normal” looks like at veterinary clinics.

Humans pull their cars into numbered slots in the parking lot and telephone the clinic staff to notify them that they and their pets have arrived.

Then, veterinary technicians or veterinarians greet the two- and four-footed friends, take brief histories, and lead or carry patients into the clinic while their people wait outside.

Some animals look longingly at their owners, seemingly confused as to why they are staying behind.

“Yeah, I had to pull her out my truck. She wasn’t a happy camper,” said owner Tammy Reid.

For much of the spring, it’s been anything but business as usual for veterinary clinics in Utah, said Dr. Eric Belnap, who has practiced at the veterinary hospital since 1987.

“We started off doing mostly just urgent care and there was always quite a bit of that, some vaccines and few other things,” he said.

“That has changed and we’re back now, just like the human hospitals, doing elective surgeries.”

Belnap said the veterinary hospital has also been a little short staffed because some employees have elected not to work due to their own health concerns.

“We have shortened our hours a little bit. We are taking less patients but as you can see, we’re full,” he said, pointing to a parking lot brimming with customers.

Belnap said the clinic pivoted to a drop-off model because the staff feared if any employees contracted COVID-19 they would have to temporarily shut down.

“For the safety of our staff and our clients, we have done this and so far, it’s worked fine,” he said.

Depending on the procedure, the veterinarians telephone owners during their pet’s treatment or come outside and chat with them in person.

While the veterinary practice currently has a strict rule against owners entering the facility, Belnap said a few exceptions have been made for “sensitive things. For example, euthanasia, because it’s so tender and challenging.”

“But when we’ve done that, we’ve asked them not to bring the whole family, just one or two that want to be in that situation. We’ve brought them into our very first exam room to keep them safe and to keep us safe,” he said.

Reid, who waited for Blue in her pickup truck with her other dog Precious, a purse-sized Pomeranian, said she understands why these clinics have changed its practices but it is “kind of hard” not to accompany her dog while she undergoes exams and treatment.

“But these guys are nice. They’re awesome, fast and efficient, awesome people,” she said.

Even so, Blue was ready to go home once her appointment ended. A veterinary tech gamely hung onto her leash as the large dog bolted across the parking lot to Reid’s truck.