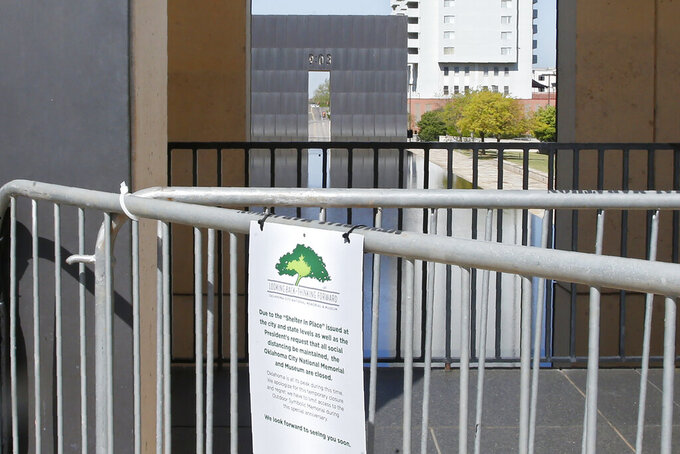 The 9:02 gate at the Oklahoma City National Memorial and Museum is pictured behind a sign announcing the closure of the site, Wednesday, April 15, 2020, in Oklahoma City. Due to COVID-19 concerns, the site scaled back its plans for a 25th anniversary remembrance and will instead offer a recorded, one-hour television program that includes the reading of the names of the 168 people killed in the bombing followed by 168 seconds of silence, instead of the annual open-to-the-public ceremony. (AP Photo/Sue Ogrocki) 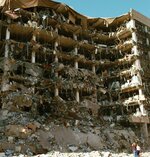 OKLAHOMA CITY (AP) — Survivors and loved ones of the 168 people who were killed in the Oklahoma City bombing were not able to gather Sunday to mark the 25th anniversary of the attack, but that did not stop them from remembering.

Because the annual remembrance ceremony was canceled due to coronavirus restrictions, those the victims instead were honored with a video tribute that included the reading of the names of those who died followed by 168 seconds of silence.

Ordinarily, the city would have gathered Sunday at the memorial where the Alfred P. Murrah Federal Building stood before it was destroyed by a truck bomb on April 19, 1995. Gates to the memorial mark time, 9:01 and 9:03 a.m., with a reflection pond between them representing 9:02, the minute the explosion permanently altered lives and the nation. Stylized, empty metal chairs represent each person who died, and the “Survivor Tree,” a gnarled American elm that withstood the blast, now stands on a small hill and shades the memorial below.

It was “extremely difficult” to not be able to attend in person, said Ryan Whicher, whose father, U.S. Secret Service Agent Alan Whicher, was killed in the bombing. “I’m not with my sisters today, I’m not with my mother today,” in Oklahoma City, he said by phone from Baltimore, where he now lives.

“But it’s all for the right reasons. ... Everyone is making sacrifices. I don’t think it’s fair for us in this coronavirus (environment) to feel we should be treated any differently,” he said.

“They did just an extraordinary ceremony under extraordinary circumstances, it was just remarkable,” Ashwood said of the video put together by the Oklahoma City National Memorial and Museum.

“The main thing I missed today was not being with our family” in Oklahoma City said Ashwood, who lives about 40 miles (64 kilometers) east of the city, in Chandler.

Kari Watkins, the director of the memorial, said this year's social distancing restrictions are necessary but unfortunate, as survivors and victims’ family members often only see each this one time each year.

“It’s just a nice time for them to come and be together," she said. "They’ll miss that, but they’ll have another time when it’s safe to gather and we’ll come back together and do something, whenever that day is.”

The city's mayor, Holt, said in the video that bombing “was, ultimately, an act of extremist political violence. I ask you to consider this morning that this sacred place is a sober reminder that humanity is capable of such evil things.”

He told The Associated Press in the run-up to Sunday that the 25th anniversary of the attack was particularly notable because it marked a transition of the event from one of personal experience to one of historical significance.

“The march of time is relentless, and every year that passes, fewer and fewer people have a direct connection to it," Holt said. “The 25th is another time for us here in Oklahoma City to refocus on what makes the event and the site relevant in the decades to come."

For Holt, that meant spreading the message that political violence is never the answer.

“People in Oklahoma City sort of have a special obligation to stand for the idea that we have much more in common than we have different," he said.

The attack was carried out by two U.S. citizens — former Army soldier Timothy McVeigh and his co-conspirator, Terry Nichols — who hated the federal government. It occurred two years to the day after the federal raid on the Branch Davidian compound near Waco, Texas, that left at least 76 members of the religious sect, including some children, dead.

McVeigh was ultimately convicted, sentenced to death and executed by lethal injection in 2001. Nichols was sentenced to life in prison for his role in what many experts refer to as the deadliest act of domestic terrorism on U.S. soil.