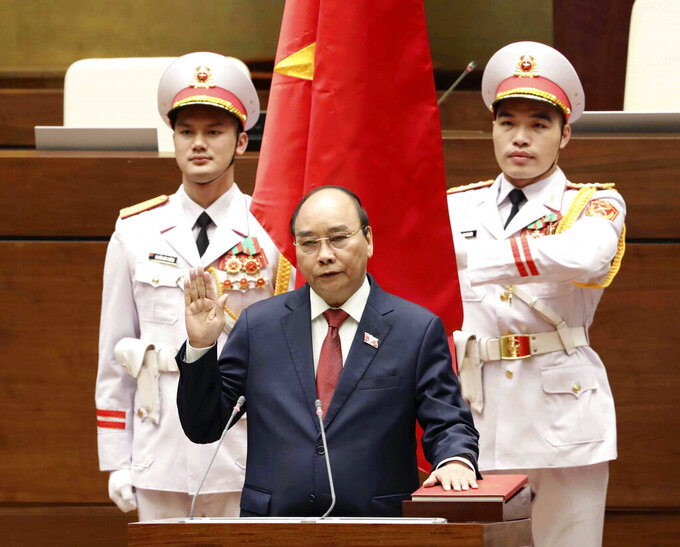 The votes of the nearly 500 members of the National Assembly rubber stamped the leadership picks the Communist party made during its national congress in January.

Chinh, 62, most recently was a member of the Communist party's central committee for personnel and organization. Chinh has had a mixed career in the party apparatus and in the security sector.

He held various posts in the Ministry of Public Security before being selected by the party to be the head of Quang Ninh, a province bordering with China. He is credited with helping with economic development in the province through administrative reform.

Nguyen Khac Giang, a scholar of Vietnam affairs at New Zealand’s Victoria University, said the selection of Chinh as prime minister could be seen a bet on his being able to keep the economy growing.

Chinh is also a member of the central steering board on corruption prevention, an office established by the Communist chief Nguyen Phu Trong to fight corruption as one of its top priorities.

During his time as prime minister, Phuc led Vietnam as it further integrated to the global economy and sustained the economic growth of 7% up until last year when COVID-19 hit the world.

With strict measures including a nationwide lockdown, Vietnam has managed to contain the spread of the virus and quickly resume its business and manufacturing. It was among a handful of countries in 2020 that recorded positive economic growth.

Phuc, 66, passed the age limit for serving as prime minister. As president Phuc will have a largely ceremonial post.

Carl Thayer, an emeritus professor at the University of New South Wales, said that Phuc has left a legacy of successfully managing Vietnam’s economic growth.

“Phuc demonstrated leadership of the highest order in decisively responding to the coronavirus pandemic. His successor will face daunting challenges but will be aided by Phuc’s legacy of transparency that earned him popular support,” Thayer said.