Vikings hurting at CB vs. Packers, who rule out RB Jones 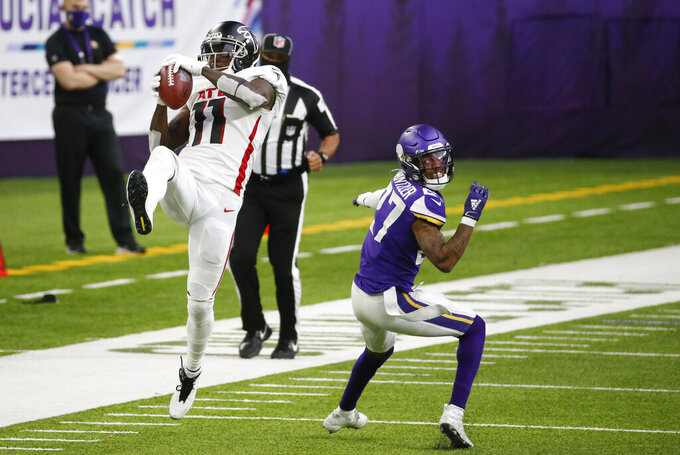 The Minnesota Vikings could be without three of their top four cornerbacks — Cameron Dantzler, Holton Hill and Mike Hughes — on Sunday at Green Bay.

Hill (foot) and Hughes (neck) were ruled out on Friday with injuries for the game against the Packers, who are second in the NFL in scoring with an average of 32.8 points per game. Neither Hill nor Hughes practiced all week. Hill will miss his third straight game. Hughes missed two games earlier this season, was re-injured on Oct. 18 against Atlanta and placed on injured reserve on Friday. That means Hughes, the 2018 first-round draft pick who has played in only 24 career games, will be sidelined for a minimum of three weeks.

Dantzler was placed on COVID-19 reserve on Wednesday. Coach Mike Zimmer left open the possibility of him suiting up in Green Bay, but he would need to clear the league's return-to-play testing protocols in time. Otherwise, rookie Jeff Gladney would be the only regular cornerback available for the Vikings, an ominous sign for facing Aaron Rodgers. Kris Boyd, who was limited in practice this week with hamstring and back injuries, is next on the inexperienced depth chart, followed by Harrison Hand and Mark Fields.

The Vikings listed running back Dalvin Cook as questionable, though Zimmer said before Cook's status was designated that he anticipated a standard workload. Cook hurt his groin on Oct. 11 at Seattle and was sidelined for the next game. He was limited in practice this week.

“He should be ready to go,” Zimmer said.

The Packers won't have leading rusher Aaron Jones, who will miss a second straight game with a calf injury. That leaves Jamaal Williams and A.J. Dillon as Green Bay's top two running backs against the Vikings.

Davis could be replaced in the base defense by rookie linebacker Troy Dye, who was designated on Monday for return from injured reserve along with starting right guard Pat Elflein. Both Dye (ankle) and Elflein (thumb) practiced this week. They were hurt in Week 2. Zimmer declined to confirm they would be activated in time to play Green Bay.

The Vikings also signed safety Curtis Riley off Arizona’s practice squad for depth after safety George Iloka was placed on injured reserve on Oct. 22. Riley is a six-year veteran who has played for five different teams.