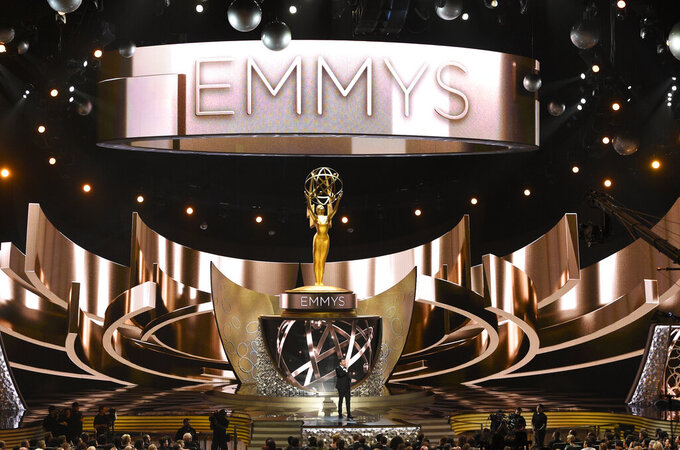 FILE - This Sept. 18, 2016 file photo shows the main stage during the 68th Primetime Emmy Awards in Los Angeles. The 72nd Emmy Awards awards will be conducted remotely and air on ABC with Jimmy Kimmel as host. (Photo by Chris Pizzello/Invision/AP, File)

LOS ANGELES (AP) — In a typical Hollywood awards show, it’s the orchestra’s task to nudge off winners whose acceptance speeches wander into overtime. In a virtual ceremony, the internet could give them an unintentional boot.

A balky online connection is among the pitfalls that may face next month’s prime-time Emmy Awards, forced into socially distanced safety by the coronavirus pandemic.

Whether ABC and the ceremony’s producers decide to gamble on mixing live and pre-taped elements remains to be seen, with planning for the Sept. 20 event hosted by Jimmy Kimmel under wraps.

The risks and rewards of going live are well-known to Adam Sharp, head of the New York-based TV academy that administers Emmys for programs outside of prime-time series; those are under the auspices of the LA-based TV academy.

He has already soldiered through the daytime and sports Emmy ceremonies that were in the vanguard of an unprecedented awards season. The Aug. 11 sports awards tackled a challenging live presentation.

“We were at the mercy of the home internet gods,” said Sharp, with presenters and nominees using desktop computers and tablets to take part in the online ceremony.

It came off without major glitches but there “were certainly those who were cursing out their internet connections,” said Sharp, president of the National Academy of Television Arts & Sciences that's presenting the Sept. 21 and 22 news and documentary Emmys online.

The Daytime Emmys took the cautious route in June, with hosts, presenters and even acceptance speeches pre-taped. Nominees were invited to submit videos to be aired if they won.

Sharp and Maury McIntyre, president of the Los Angeles-based Academy of Television Arts & Sciences, have discussed staging remote ceremonies minus the sizzle of red-carpet glamour and halls packed with celebrities.

McIntyre got a taste of orchestrating a live virtual event when the nominations were revealed last month, with host Leslie Jones in a studio and presenters Josh Gad, Tatiana Maslany, and Laverne Cox at home.

After fretting about dropped Wi-Fi connections during the brief online announcement, McIntyre recalled, he told Sharp he was surprised that his Emmy experiences to date hadn't led to an ulcer.

“I don't know how I'm going to live through the night," McIntyre said of the telecast that's handled by the network in consultation with the academy.

The three-hour ceremony is meant as entertainment and a tribute to the past TV season's achievements. Both require big-name nominees to participate.

Nominees got a sense of what's ahead in a letter from the producers, including Kimmel, that mixed cheerleading and cajoling. The goal, they wrote, is to ensure that the ceremony is “not compromised by this crazy moment in our lives."

“It’s still going to be TV industry’s biggest night out… but we’ll come to you!” they wrote, promising to assemble a top-notch team of technicians, writers and others to “make you look fabulous” with good cameras and lighting at home or another location of choice.

Before COVID-19 hit, the Emmys were to have been held in the 7,100-seat Microsoft Theatre in downtown Los Angeles. There is overlap between real and virtual ceremonies — the split screen that shows each nominee in a box, a la Zoom meetings or “The Brady Bunch" opening, as the choice is announced.

In the online sports ceremony, the winner's square quickly expanded to fill the screen.

There are advantages to going virtual, Sharp said, including shorter acceptance speeches.

“I don't know if that is because they (winners) are in their homes, and they're not looking out at a room of people and constantly being reminded of people they forgot to thank,” he said.

An element that was rendered moot by a virtual ceremony provided an unexpected benefit: That glad-handing saunter or even sprint to the stage by each winner sucks up a lot of time.

“Anywhere between 15 and 22 minutes of our show is generally walking to the stage, or presenters walking from behind stage to the mic," McIntyre said. "Just a lot of walking.”

That allowed for something more compelling for the Sports Emmys, as some presenters had space to conduct on-the-fly interviews. When “What’s My Name: Muhammad Ali Part I" was honored as best long documentary, a discussion ensued on how the boxing great and activist might reflect on the confluence of sports and today's Black Lives Matter protests.

Producers can work effectively within the constraints imposed on them by the virus, said Don Mischer, a veteran producer whose credits include the Oscars and Emmys. But it's the unscripted moments that count.

“If there's not a surprise winner, and there’s not that poignant, tearful acceptance speech or the feeling that somebody’s in a life-defining moment,” Mischer said, "then no matter what you do, it’s not going to work out as well as you hoped.”