Virus case on Germany team ahead of World Cup qualifier 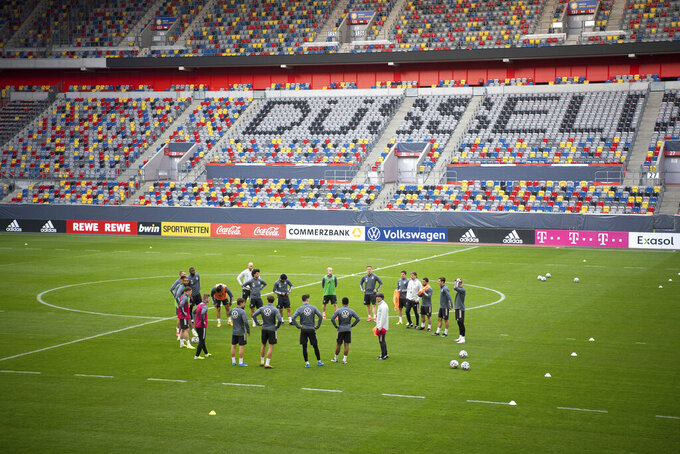 German national soccer team players stand in an empty stadium during a team practice session ahead of their upcoming World Cup qualifier match against Iceland, at Merkur-Spiel-Arena in Duesseldorf, Germany, Tuesday March 23, 2021. (Federico Gambarini/dpa via AP)

DÜSSELDORF, Germany (AP) — Germany will be without two players for its opening World Cup qualifier against Iceland after midfielder Jonas Hofmann tested positive for the coronavirus and full-back Marcel Halstenberg was deemed a close contact.

The German soccer federation said Thursday's game was still going ahead and that Hofmann was in isolation and symptom-free. A matchday fitness session outdoors was called off and the team was screened again using rapid antigen testing kits, with negative results. More tests are planned for Friday.

Germany general manager Oliver Bierhoff said he was optimistic the virus was unlikely to spread because the team had taken measures to reduce contact between players outside training sessions. That includes keeping players apart on two team buses and separate eating arrangements.

“Of course, we will implement any requirements the authorities may have,” Bierhoff said.

It is the first time a player has tested positive for the coronavirus while with the German national team, which has played eight friendlies and Nations League games since the pandemic began.

The match against Iceland will be Germany's first since a 6-0 loss to Spain in the Nations League in November. That was the team's worst-ever defeat in a competitive game, and worst in any game since 1931.

Germany plays Romania away on Sunday and hosts North Macedonia on Wednesday in Group J.