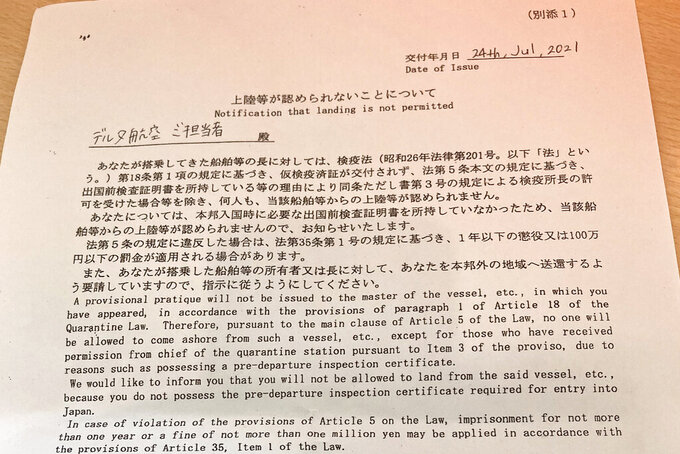 Associated Press Golf Writer Doug Ferguson was required to sign this form stating that he was denied entry upon landing at Haneda Airport to cover the 2020 Summer Olympics in Tokyo on July 24, 2021. Ferguson's second of two COVID-19 tests required for entry in to Tokyo was 39 minutes early, resulting in a flight to Seattle for another test and then back to Tokyo. (AP Photo/Doug Ferguson)

SOMEWHERE OVER THE PACIFIC (AP) — My location was Haneda Airport in Tokyo. My destination was the Main Press Center for the Olympics — also in Tokyo.

Turns out the quickest route was through Seattle.

Among the requirements to cover the Tokyo Olympics were two negative COVID-19 test results within 96 hours and 72 hours of travel.

This wasn't easy to begin with. The 96-hour test would have to be on Sunday, July 18, right about the time the final group in the British Open was on the sixth hole. I missed the Open for the first time since 1996 — Tiger Woods’ last major as an amateur — because of the UK quarantine laws and the difficulty of getting home and tested in time for the Tokyo flight.

I made it through the Sunday and Monday tests, both results were returned on Wednesday, my flight was Thursday. Life was good.

I thought my flight from Atlanta was 11 a.m. It was at 11:39 a.m. No big deal, right? I’ve spent a lifetime erring on the side of being early rather than late, so I never gave this another thought.

Then I landed at Haneda.

The negative test is required within 72 hours of the flight leaving for Japan. Mine was 72 hours and 39 minutes. There was no budging.

Their recommendation was to call the clinic — it was 2 a.m. in Jacksonville, Florida — and “negotiate.” When I called that night (Friday morning in Florida), the clinic said no go.

I asked about taking the test at Haneda — another test was required before entry, anyway. They said I technically had not “entered” Japan. The testing area was on the other side of the entry desk. I had no choice but to sign a form that entry was denied.

All the while, my colleagues at the AP were contacting IOC officials for help. Antony Scanlan, the head of the International Golf Federation with a long history at the Olympics, was calling everyone he could for help. The answers all contained some variation of the phrase, “Very strict.”

I had two options: Go to a quarantine hotel for six full days and be tested three times. If all went well, I could get to Kasumigaseki Country Club in time for the final round. The other was to return to the U.S. for another test and then come back. This sounded absurd.

However, that would mean a 6:20 p.m. flight to Seattle on Saturday (arriving about noon on Saturday), testing in the airport when I arrived, and then returning to Tokyo on the 11:35 a.m. flight on Sunday that would arrive Monday afternoon, and then start the entry process over. I could be at work on Tuesday.

(If you’re wondering — as I did: Because of severe travel restrictions in both places, Delta has suspended its nonstop service to Honolulu).

Total air miles: somewhere around 17,000. Time spent in the main cabin: roughly 35 hours. I looked out the window when we landed in Seattle and saw snow-capped Mount Rainier, so I sent a photo to a friend in Florida who replied, “Mount Fuji?”

So the itinerary thus far is Jacksonville to Atlanta to Tokyo to Seattle to Tokyo. Golf hasn’t even started, and I’ve already made three trips across the International dateline in a span of three days. I had estimated my door-to-door travel time at 22 hours.

I was off by three days.

EDITOR'S NOTE — Doug Ferguson successfully entered Japan on his second try and made it to the Main Press Center on Monday afternoon.

Virus Diary, an occasional feature, showcases the coronavirus pandemic through the eyes of Associated Press journalists around the world. Doug Ferguson is the golf writer for the AP. Follow him on Twitter at http://twitter.com/dougferguson405