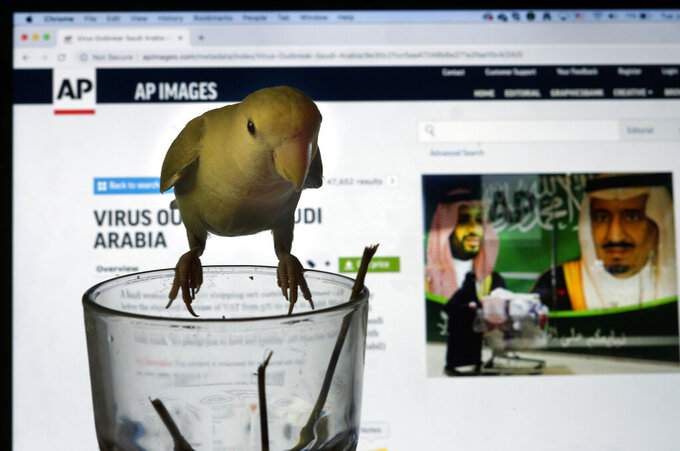 JIDDAH, Saudi Arabia (AP) — I moved to Saudi Arabia from Egypt last year, eager to photograph a national awakening that was once unimaginable in a country so beholden to ultraconservative mores.

Permission to have fun had been suddenly granted. It jolted this nation of 34 million — almost half of whom are under 30 years old — into a nation of budding movie theaters, concerts and raves, a place where women could dine alongside men, drive without fear of arrest, travel without permission and enter stadiums.

As a photographer, I was for the first time welcomed to document far-flung parts of the country. A cultural festival in the mountains of Abha. Newly discovered diving spots in the Red Sea.

Then, just as quickly the country had opened up, it closed off.

No longer would tourists be permitted to visit. The kingdom's borders were shut entirely.

The coronavirus had slipped into Saudi Arabia, evading early and stringent attempts to keep the contagion out. Entire cities, including the capital, Riyadh, were placed under 24-hour curfew. The holy city of Mecca was sealed off. The year-round Muslim umrah pilgrimage was suspended.

In March, I stood atop the upper floors of Mecca’s Grand Mosque and turned my camera toward an empty white marble expanse surrounding the cube-shaped Kaaba as the final group of pilgrims was told to depart. I was stunned. Tears streamed down my face.

I'd stood here so many times before. I'd been here during the hajj pilgrimage, when more than 2 million faithful from around the world circle the Kaaba counterclockwise, their hearts leaning toward it, their palms stretched toward the sky, their shoulders brushing against a sea of humanity.

Now I was photographing scenes of sterility and calls to prayer without worshippers.

At home, in the Red Sea city of Jiddah, life for my wife, my daughters and me was curtailed by lockdowns and curfews. For months, only grocery stores, gas stations, pharmacies and hospitals opened. Curfew sometimes extended until 6 p.m.; other times it was in place for 24 hours. For one week in April, the curfew eased and mosques reopened with strict guidelines. Then a spike in infections brought more days under a 3 p.m. curfew.

Like all residents of Saudi Arabia, I receive constant text messages from the government reminding me to wear a mask, wash my hands, obey the curfew, socially distance. Still, the country remains a hotspot for the virus in the Middle East, with more than 2,000 deaths and at least 220,000 confirmed cases.

Unable to move about freely with my camera, I instead spent days vicariously exploring photographs from my peers around the world.

I also found company in my lovebird, “Sugar." From the moment Sugar hatched in the palm of my hands, I have showered him with love and attention. I have researched and taken notes on what my pampered friend likes to eat and what his sounds could mean.

Unlike me, my bird spends his days uncaged. He’s learned to rest in my palm when I beckon him, but he prefers to stand atop my laptop, especially during Zoom calls. His favorite pastimes are looking outside the window and calling me to prepare food and water for the other birds less fortunate in the sweltering heat outside.

It's been about two weeks since curfews in Jiddah were lifted. Malls, restaurants and movie theaters are open once more. The country's borders, though, remain shut. And even as Sugar flies uncaged around me, it's hard not to still feel locked in.

Virus Diary, an occasional feature, showcases the coronavirus pandemic through the eyes of Associated Press journalists around the world. Amr Nabil is an AP photographer in Saudi Arabia. Follow him on Twitter at http://twitter.com/amrpix7777777