Virus dispute could force Iowa schools leader out of job 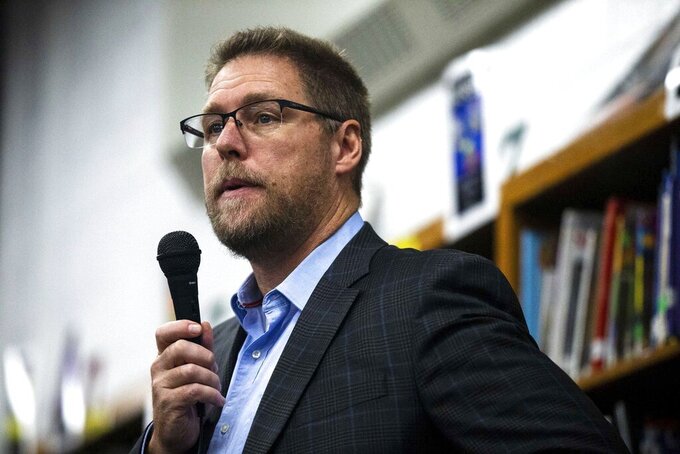 In this Oct. 16, 2019 photo, Des Moines Public Schools Superintendent Tom Ahart speaks to students about the By Degrees foundation starting college savings accounts for students at Harding Middle School in Des Moines, Iowa. Like superintendents across the country, the leader of Iowa’s largest school system has faced plenty of criticism as he attempted to educate children in the past year while also keeping them safe during the coronavirus pandemic. But as pressure eases in many districts thanks to falling infection rates, Ahart is facing more uncertainty. (Kelsey Kremer/The Des Moines Register via AP)

DES MOINES, Iowa (AP) — Like superintendents across the U.S., the leader of Iowa’s largest school system has faced plenty of criticism from parents, politicians and teachers as he tried to educate children while also keeping them safe amid the coronavirus pandemic.

But as pressure eases in many districts thanks to plummeting infection rates, uncertainty appears to be building around Des Moines schools Superintendent Thomas Ahart, who last week had a contract extension rejected and this week will argue that his license shouldn’t be revoked. The result could be that as the 31,000-student district plans for a return to normal classroom learning this fall, the superintendent who led them through a tumultuous year is ousted from his job.

“That’s just bizarre,” said Paul Hill, an education professor at the University of Washington and founder of the Center on Reinventing Public Education who follows national school trends. “This is the first time I’ve actually seen some place going to the point of turning a partisan difference about a school reopening into a threat to somebody’s job.”

For Ahart, the problems have been building for more than a year, as the Des Moines school board at times reluctantly supported his cautious approach that leaned on virtual learning.

Hundreds of other districts in the U.S., especially in urban areas, approved similar policies that led to disputes. Those included a parent-led lawsuit in Los Angeles over the quality of virtual instruction, a disagreement on whether Dallas teachers needed to offer online classes from schools and complaints in Milwaukee that urban students were getting inferior virtual instruction while suburban schools reopened to in-person education.

The situation in Des Moines stood out because the district's stand contrasted with the Republican governor’s push to reopen classrooms quickly even as Iowa dealt with some of the nation’s highest infection rates.

As the 2020-2021 academic year began, Gov. Kim Reynolds' administration generally required schools to provide at least half-time in-person learning. She contended the need for parents to have an in-classroom option and the mental health benefits of learning in schools trumped other concerns, while Ahart argued that the high prevalence of the virus in the Des Moines area coupled with crowded conditions in the district’s schools made conditions unsafe for students and teachers.

For the first two weeks of the school year, Des Moines was in violation of the state requirement — until it gave families the choice of hybrid learning and all virtual. Later, the state ruled Des Moines students didn’t get credit for those two weeks, so the district increased teaching time to ensure students met state standards.

The matter appeared to be resolved until March, when the Iowa Board of Educational Examiners acknowledged receiving a complaint against Ahart because of the district’s earlier violation. The board, whose members are appointed by the governor, gave Ahart the option of surrendering his license, which would end his position, or agreeing to a lesser sanction.

Ahart opted to appeal the board’s decision, and a hearing is set for Thursday.

Members of the school board issued a statement defending Ahart and noted he was carrying out the board’s decisions.

“Trying to save the lives of Iowans, during a period unlike anything any one of us has ever experienced, should not be met with an attack on Dr. Ahart’s career,” the statement said.

The district has declined to comment further on the licensing issue and directed questions to the superintendent’s lawyer. Neither Ahart nor his attorney, Dustin Zeschke, have responded to requests by The Associated Press to comment.

Reynolds spokesman Pat Garrett didn't respond to questions about whether the governor thinks Ahart should lose his license.

In January, Reynolds signed a law that goes further than the state's previous policy and requires districts to give parents the option to send their children to school in person full time.

“It’s time to put local control into the hands of parents where it belongs so that they can choose what’s best for their children,” she said at the time.

Last week, the Des Moines school board added to the uncertainty surrounding Ahart by voting 4-3 against an extension of his contract, which now runs through June 2023. A board statement noted working with Ahart in the future but declined to specify why it was breaking with its tradition of annually extending his contract, citing the confidentiality of personnel actions.

Josh Brown, president of the Des Moines Education Association, which represent more than 3,500 teachers and other employees, expressed surprise that the state educational examiners would pursue action against Ahart, given the district has for months been in compliance. Considering the uncertainty about how to respond to the pandemic in the last year, Brown said it seems officials should give Ahart and Des Moines school board members credit for doing what they thought was right.

Even as Ahart faces the potential of losing his license, Brown said support for him among teachers and staff has grown.