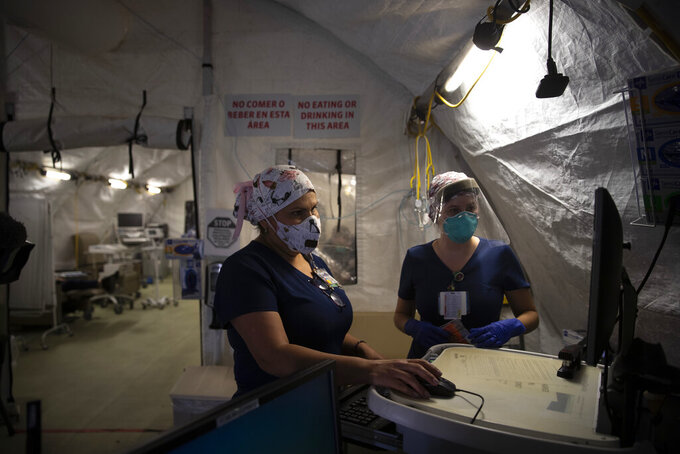 CALEXICO, Calif. (AP) — Dr. Tien Vo's last stop of the night is the home of a 35-year-old woman who has diabetes, asthma, rheumatoid arthritis and, now, the coronavirus. The virus killed her father six days earlier. The oldest of her four children, a 15-year-old boy, learned he had it that morning.

Tilted back in a reclining chair at her bedside using an oxygen device, Cynthia Reyes tells the doctor she can no longer stand up herself.

“I can’t catch my breath. It takes a long time to get to the restroom. I feel like I’m going to faint,” she says anxiously.

Vo, who exchanges text messages with Reyes every few hours and speaks with her almost daily, listens and nods.

“I've tried my best already, but sometimes, you know, we can't do enough,” Vo says after leaving.

Reyes lives in California's often-forgotten Imperial County, a farming region along the Mexican border. Until recently, it had the state's highest coronavirus infection rate and its two hospitals were overwhelmed. The county is largely Latino and low income, groups that have suffered disproportionately from the virus.

Vo is "a rock star" for bringing medical services, says Alex Cardenas, a former mayor of El Centro, the county seat. The doctor's two clinics have done more than 27,000 coronavirus tests since March 23, with a positive rate between 25% and 30%.

Vo and his wife, a nurse practitioner, emigrated from Vietnam as teenagers. They drifted west from New York to settle 10 years ago in Imperial County, which produces a major share of vegetables in U.S. supermarkets during the winter.

Vo, 43, says he stayed because people are friendly and appreciative. He sees happiness in their eyes when they greet him.

“They really need a doctor here,” he says from the front seat of a company van between house calls. “They’re not very hard to please. They chat with me. They text me every day.”

To date, Imperial County has had more than 5,200 cases for every 100,000 people, nearly triple that of hard-hit Los Angeles County, the nation's largest county. Nearly 20% of Imperial patients have tested positive, compared with 6.3% statewide.

Deaths have reached 220 in a county with about 180,000 residents. San Francisco has five times the population but two-thirds fewer deaths.

El Centro Regional Medical Center, which briefly stopped taking patients in May, is “bursting at the seams,” says Dr. Adolphe Edward, chief executive officer. Tents set up in a parking lot serve COVID-19 patients, one an emergency room and one an intensive care unit.

A lack of beds has forced the transfer of more than 600 coronavirus patients to hospitals elsewhere in California and brought an influx of state and federal aid, including a spillover 80-bed hospital in a community college gymnasium and additional intensive-care beds.

There is no single reason for Imperial County's plight, but inequalities loom large. It often has the highest unemployment rate among the nation's 389 metropolitan areas. The jobless rate was 27.3% in June.

Imperial is 85% percent Latino, with elevated rates of diabetes and obesity. Wind-blown dust contributes to asthma. Its 21% poverty rate is among California's highest. Crowded, multigeneration households spread the virus quickly.

Mexicali, Mexico, an industrial city of 1 million people, brings additional strain when people cross the border for medical care. Many are U.S. citizens and legal residents.

Imperial County is surrounded on three sides in the U.S. by vast, uninhabited desert and Mexicali's urban sprawl to the south. Settlers diverted Colorado River water with a dike that breached in 1905, causing a two-year flood. Large farms have been passed through generations of families of white European descent.

Colorado River water gravitates through hundreds of canals along highways and dirt roads to the farms, getting saltier before it empties into the Salton Sea, California’s largest lake. It was once a desert playground for speedboat racers and Hollywood entertainers but now is evaporating as less water seeps down from the river.

The lake's shores occasionally are blanketed with the carcasses of oxygen-starved tilapia, while dust from newly exposed lakebed is kicked up by desert winds, helping explain why air quality in the area violates federal standards.

Dulce Garcia, who was born in Mexico and settled with her family in California's Central Valley when she was 12, moved to Mexicali 10 years ago after her husband was deported. She walks across the U.S. border to her job in Calexico to work as a medical assistant at a El Centro Regional Medical Center clinic. She is one of the hospital's 60 employees who live in Mexicali.

Garcia, 38, rents a room in a Calexico house with other women, letting her register her U.S.-born sons, ages 17 and 15, in the city's public schools. She sleeps some nights on the U.S. side but usually returns to her apartment in Mexicali. Her husband picks her up in their 2001 Chevrolet Monte Carlo for a 10-minute drive to their leafy neighborhood with a large park for evening strolls.

Garcia, a naturalized U.S. citizen, is uncomfortable crossing the border daily to be around COVID-19 patients but, like many others, sees no alternative. A U.S. salary goes much further with Mexico's cost of living and makes up for the scant wages her husband's construction job pays in Mexicali.

“Everybody's scared of the pandemic, but we have to cross,” Garcia said after pulling out her travel documents for U.S. border inspectors at the end of a hallway, where a guitarist sang Mexican ballads for morning commuters. “We have to survive.”

During harvests, Garcia is part of a second wave of daily commuters, made up of workers with later hours and students.

Thousands of farmworkers who live in Mexicali begin lining up shortly after midnight at the border, filling streets of tiny downtown Calexico until buses take them to fields to pick lettuce, spinach, broccoli, onions, cauliflower, carrots, cabbage and celery. In spring, they harvest cantaloupe, honeydew and watermelon.

Vo met his wife when she was in college in New York City and he was doing his residency there. They moved to upstate New York, Phoenix, Yuma, Arizona, and finally Imperial County, where he says they have about 40,000 patients. They also own a 31-bed nursing home.

Part of the appeal is proximity to family in Southern California's Orange County, a magnet for Vietnamese immigrants where they were raised as teenagers in the 1990s. Their parents still live there. The couple have two children, a 9-year-old daughter and 10-year-old son.

The indefatigable doctor is often on the move in blue scrubs, even after his clinic closes at 6 p.m. weekdays. He eases up slightly on Sundays, when he shuts down at 2 p.m.

Cardenas, the former El Centro mayor and lifelong resident, is Vo's driver on a recent night of meal deliveries for people who are quarantined and don't have anyone to shop for them.

Their first stop is the mobile home of a 62-year-old man who lives alone with diabetes and asthma. Next is the modest, two-story house of a 55-year-old diabetic, one of seven people infected with the virus in a household of 12 people spanning three generations.

Judith Aguirre, 53, believes her husband got the virus at his dialysis center because so many other patients got it. She, a pregnant daughter and four of eight grandchildren got it next in their five-bedroom house.

“Doctor, we really appreciate what you do for the valley," Aguirre said after Vo delivered boxes of barbecue beef, macaroni and cheese, bread and coleslaw. “I've heard that you call in the middle of the night. You do house calls.”

At Vo's last stop, Reyes talks about her 69-year-old father, a “very strong man” who died three weeks after being diagnosed with the virus.

“All of a sudden, he went to the hospital and he couldn’t breathe,” she said.

A week later later, Reyes' symptoms had improved, but she was still on the oxygen device and a long way from a full recovery.

This story has been corrected to show Vo’s wife is a nurse practitioner, not a nurse; and to show the couple has two children, not two sons. The daughter is 9 and the son is 10 years old.