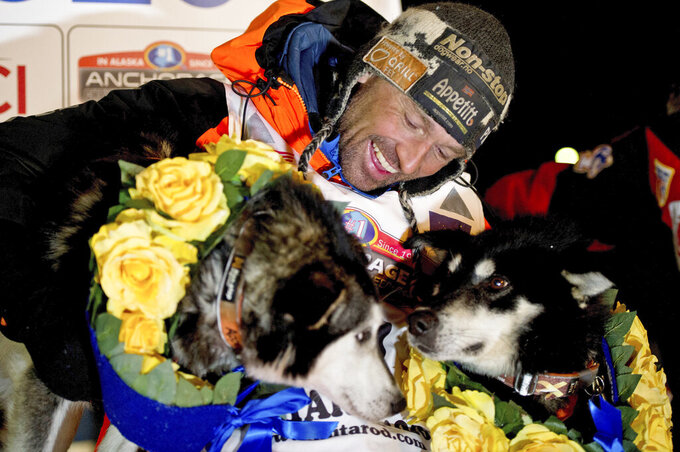 FILE - In this March 18, 2020 file photo, Thomas Waerner, of Norway, celebrates his win in the Iditarod Trail Sled Dog Race in Nome, Alaska. The world's most famous sled dog race will go forward in 2021 officials are preparing for every potential contingency now for what the coronavirus and the world might look like in March when the Iditarod starts. It's not the mushers that worry Iditarod CEO Rob Urbach; they're used to social distancing along the 1,000 mile trail. The headaches start with what to do with hundreds of volunteers needed to run the race, some scattered in villages along the trail between Anchorage and Nome, to protect them and the village populations. (Marc Lester/Anchorage Daily News via AP, File)

ANCHORAGE, Alaska (AP) — Norwegian musher Thomas Waerner said Monday that he won’t defend his title at next year’s Iditarod Trail Sled Dog Race because of restrictions and uncertainty over travel during the coronavirus pandemic.

“I cannot find a way to get the dogs to Alaska,” Waerner said in an email to The Associated Press.

As he learned earlier this year, getting to Alaska is only half the battle: Waerner wasn’t able to return to his wife and five children in Torpa, Norway, for months after winning the world’s most famous sled dog race because travel was restricted as the pandemic took hold. The Iditarod was one of the few professional sports that wasn’t canceled last March.

While the defending champion says he won't participate in the 1,000-mile (1,609-kilometer) race across the rugged Alaska terrain, the Iditarod is still scheduled to start March 7.

That includes a fan-friendly ceremonial start a day earlier that usually attracts thousands of people in Anchorage.

Iditarod CEO Rob Urbach said organizers are planning normal events for the ceremonial and official starts but have considered plans where small numbers of people are allowed to attend because of possible pandemic restrictions.

He said organizers not making a decision yet, with college basketball games, college football playoffs and the Super Bowl in the months ahead to guide them on how to incorporate fans.

“It’s creating a lot of complexities,” Urbach said of preparations. “It’s created a lot more work for all of us, but we’re extremely confident that we can have an event so that probably the safest place you can be from COVID would be on the Iditarod trail.”

Organizers have developed a robust testing program, which may not be needed if a vaccine is widely available by March. Helping them formulate their plan is Dr. Jodie Guest, an infectious disease epidemiologist at Emory University in Atlanta who has been an Iditarod race volunteer for years.

“I had to make the difficult decision to not start in the Iditarod 2021. It is a lot of work to get to the starting line in a normal year, and in this COVID times it is not possible to get dogs and myself to Alaska," Waerner posted on Facebook.

He told Hello Musher, a Norwegian publication dedicated to dog sledding culture, that it was “impossible” to plan “and the clock is ticking fast. There is so much we have no control” over.

Once Waerner officially withdraws from the 2021 race, it will leave 57 mushers in the mix, including former champions Martin Buser, Dallas Seavey, Pete Kaiser and Joar Leifseth Ulsom, also originally from Norway. The same number of mushers started the 2019 race but only 33 finished.

Waerner and his 16 dogs crossed the finish line in Nome on March 18. They were stuck in Alaska until catching a ride on a plane bound for a museum in Oslo, Norway, in June.