Virus slams Bolivia as hospitals say: 'There is no space' 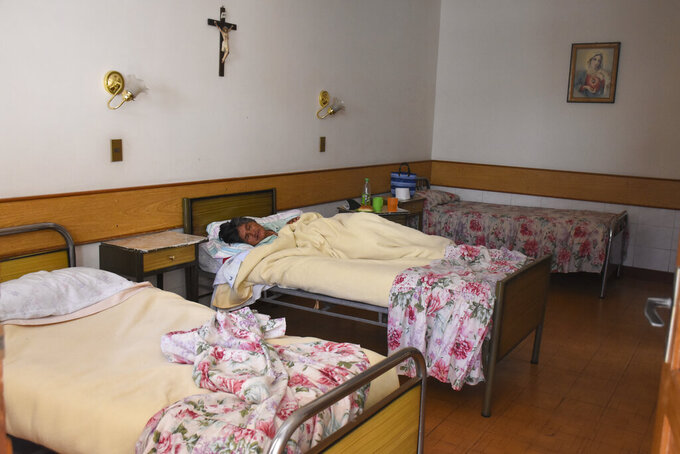 An elderly woman infected with COVID-19 rests in an isolated area of the San Jose nursing home in Cochabamba, Bolivia, Friday, July 17, 2020. At least 60 residents at the senior care facility tested positive for the new coronavirus and 10 have died from related symptoms in the last two weeks, amid a rise in cases and fatalities in the Andean country. (AP Photo/Dico Solis)

LA PAZ, Bolivia (AP) — Police in Bolivia's major cities have recovered the bodies of hundreds of suspected victims of the coronavirus from homes, vehicles and, in some instances, the streets. Hospitals are full of COVID-19 patients and short of staff, keeping their gates closed and hanging out signs that say: “There is no space."

And the Bolivian government says the peak of the outbreak is not expected until August.

Desperation is growing in one of Latin America's poorest countries, which seems overwhelmed by the virus even as it endures political turmoil stemming from a flawed election and the ouster of President Evo Morales last year. A plan to hold elections in September, seen as a key to stabilizing its democracy, is increasingly in doubt as the pandemic worsens.

Some funeral homes have hired more staff to cope with the influx of the dead, and hearses at the main cemetery in the capital of La Paz line up daily to deliver bodies. With little space available, the mayor’s office only allows burials for people from the municipality and charges more than $100 for cremation, a huge sum for most Bolivians. A private cremation service costs twice as much.

“My brother died of pneumonia and we cannot find a funeral home. We have to wait until tomorrow. Many people are going through the same thing and nobody helps us,” said Herminia Carpio, sobbing as she waited to collect her brother's body at the door of the largest public hospital in La Paz.

Some doctors are issuing falsified death certificates for virus victims, putting funeral home staff at risk, according to an undertaker in La Paz who spoke on condition of anonymity because of the sensitivity of the matter.

A COVID-19 death in Bolivia requires strict safety protocols for handling the body, raising the price of funerals. There are allegations that some relatives have paid doctors to list a cause of death unrelated to the virus. In any case, medical services are overworked and may not have the time or capacity to assess the cause of death accurately.

More shocking news came this week when police said they recovered 420 bodies from various locations in La Paz and in Bolivia’s biggest city, Santa Cruz, in the span of five days. Between 80% and 90% of them are believed to have had the virus.

The political fallout from the pandemic is escalating. A committee that advises the Health Ministry on outbreak containment measures said in a letter this week to Bolivia’s top election official that holding the vote as scheduled would not be advisable.

Most researchers agree that “to plan activities such as an election, you must wait for the epidemiological curve of active cases to have a sustained decrease for a period of 14 days, so the date of Sept. 6 is not appropriate,” the committee, made up mostly of doctors, wrote to Salvador Romero, president of the Supreme Electoral Tribunal.

The committee has previously said many people who contract COVID-19 do not report their illness for fear of being stigmatized. Many in rural areas do not believe in the existence of the virus, while disregard for social distancing rules in the cities is making matters worse, according to the committee.

Some Bolivians have resorted to fake cures, including a toxic bleach that people are lining up to buy in the city of Cochabamba. Like many other countries, the Andean nation instituted restrictions to curb the spread of the virus but gradually started to lift them June 1 to relieve the economic strain on the population of more than 11 million.

Bolivia has reported nearly 2,300 confirmed deaths from COVID-19, although the real number is believed to be higher. César Salinas, the president of the Bolivian soccer federation, was among the dead. Interim President Jeanine Áñez tested positive and says she is recuperating in quarantine.

The election tribunal, which has not yet commented on the letter recommending a postponement of the vote, will decide on the date with the endorsement of the congress, currently dominated by the Movement for Socialism party. The group was led by Evo Morales, who was forced to resign as president last year after protests and clashes over an election that international observers said was marred by irregularities.

The Movement for Socialism party, which nominated former economy minister Luis Arce as its presidential candidate, wants the election to go ahead as scheduled. Its supporters have warned of street protests if the election is postponed and Arce alleged the Áñez government is using the pandemic as a “pretext to extend itself.”

Six of the eight parties in Bolivia’s election race have said they favor a postponement.