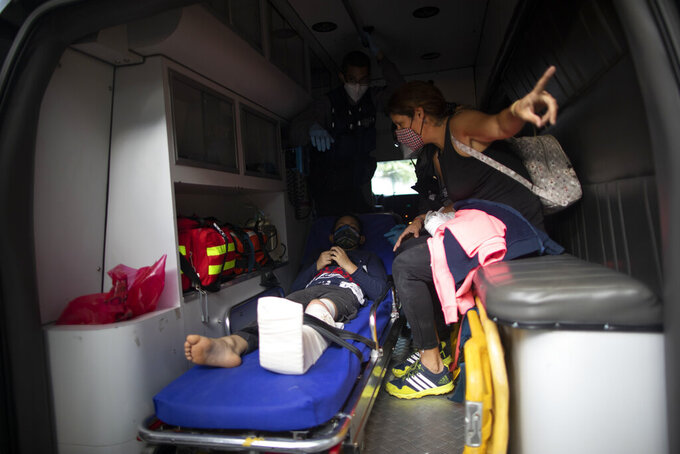 A boy who was involved in a motorcycle accident is transported to the hospital by Angels of the Road volunteer paramedics in their only ambulance in Caracas, Venezuela, Thursday, Feb. 4, 2021. The volunteer corps relies on donated medical supplies and funding from international organizations to provide much-needed emergency services, operating entirely independent of the government. (AP Photo/Ariana Cubillos)

CARACAS, Venezuela (AP) — Venezuela's deepening crisis has gutted emergency ambulance services, so a group of volunteer paramedics has stepped into the void to offer life-saving help on the tough streets of Caracas.

Calling themselves Angels of the Road, the volunteer corps relies on donated medical supplies and funding from international organizations. Despite receiving no paychecks, its roughly 40 paramedics are ready at a moment's notice to jump onto motorcycles and fire up their single ambulance and race into the streets.

Jonathan Quantip, 44, said he and co-founder Zuly Rodiz launched the project two years ago after watching their native Venezuela precipitously decline over years of political and social crisis.

“We Venezuelans have to solve our own country's problems," Quantip said. "We have to use the skills we're each good at.”

The group works on a shoestring budget with nothing left over for wages, so each paramedic relies on another source of income. Some donate their off-time after working in hospitals and firehouses. Others flip burgers in fast-food restaurants.

The paramedics say they feed off the adrenaline of each emergency call to a chaotic crash scene or shooting in an underserved barrio. Simple gestures of gratitude also motivate them, said 21-year-old paramedic Laura Lara.

“It's helping people and hearing them say ‘thank you’ after hanging on despite their pain and suffering,” Lara said. “All that emotion is what makes you fall in love with this."

Venezuela was once a wealthy oil nation, but years of political crisis has left it in ruins. Most residents don’t have reliable running water and electricity at home. The crisis has sent more than 5 million fleeing in a migration rivaling that of war-torn Syria.

Venezuela's hospitals lack basic medicine and trained personnel and there aren’t enough ambulances in service to meet the needs of its population, said Quantip, adding that no other volunteer paramedic organizations like this exist in Venezuela. Some state services exist, but they are unreliable and often don't have adequate medical supplies, while private companies are more expensive than most Venezuelans can afford.

Staffers for Angels of the Road work in rented office space at a national newspaper that no longer prints a paper edition. They keep a constant ear on walkie-talkie radio traffic and scan online chats dedicated to emergency services.

Sometimes, colleagues in the public sector ambulance and fire services need help and call them for backup, they said, noting a recent call from a firehouse with a truck that had no gasoline.

Rodiz, 38, was trained as an architect and earns a living managing social media websites. She picked up the basics of first aid through courses and learning from others in the street.

Rodiz said they've abandoned any sense of rivalry with public services, including police, fire and ambulances. Their colleagues in the public sector often lack basic medical supplies like gloves, so they share what they have, she said.

“The moment comes that they call saying, ‘Look, we need your help,’” she said. “OK, you do it with all the love and care in the world in order to be able to help anybody who opens the door for us.”

Each day brings on average three to four calls, and the new coronavirus pandemic means that at least one of those is a request to take a patient with trouble breathing to a hospital, putting the volunteers themselves at risk of catching the disease.

Dr. Luis Richard, a surgeon who specializes in trauma care, trained many members of Angels of the Road, calling them “stars.” He said there simply aren't enough paramedics to meet the need.

Richard, who recently migrated to Costa Rica, said the first responders often mean the difference between life and death.

“Fifty percent of the patients live or die because of their pre-hospital care,” Richard said. “They’re the ones making the difference.”