'Vote and get home,' anxious voters say on Election Day 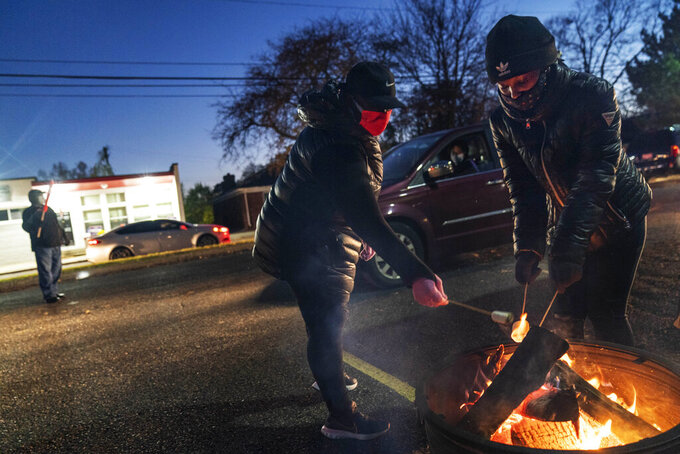 Volunteers Latrina Lawrence, left, and Breya Smith, roast marshmallows for motorists pulling through a drive-thru socially distanced Halloween celebration in the parking lot of The Winner's Circle Church in Mount Clemens, Mich., Saturday, Oct. 31, 2020. According to pastor Leon McDonald III, the event was intended to bring a sense of normalcy to its congregation amid coronavirus lockdowns and a sense of anxiety leading up to the election. (AP Photo/David Goldman)

She carefully planned a five-hour drive to the polling place in her Tennessee hometown to vote on Election Day. She considered the traffic, the weather, the surging coronavirus pandemic and — something she never imagined having to contemplate — the possibility of civil unrest in the aftermath of an American election.

The last four years have delivered so many shocks that anything seemed possible to Lacey Stannard, the wife of a soldier. She had tried to get an absentee ballot sent to her home on a military base on the other side of the state. But the clerk in her hometown refused. A part of her thought it was crazy to drive 10 hours roundtrip to cast a Democratic vote in deep-red Tennessee, but a larger part thought it was worth it to register her displeasure.

Many Americans who lined up before dawn to vote on Election Day are exhausted from constant crises, uneasy because of volatile political divisions and anxious about what will happen next. Like those who cast ballots early, their agony is not in deciding between President Donald Trump or his Democratic challenger, Joe Biden. Most made that choice long ago. Instead, those voting in record numbers say basic democratic foundations feel suddenly brittle: Will their vote count? Will the loser accept the result? Will the winner find a way to repair a fractured, sick and unsettled nation?

Stannard, a 28-year-old mother of two, hit the road Monday evening to arrive at the polls early on Election Day, only to turn around and rush home before an uncertain conclusion might aggravate a nation already on edge — fear she blames on the president’s penchant for pitting people against each other.

“When the election results start trickling in, I would rather be safe at home, which is sad because never in my life... would I have thought I have to hurry up and vote and get home so that I wouldn’t have to be fearful,” she said. “Which is one of the reasons I’m driving five hours to vote because I shouldn’t have to feel that way.”

Across the country, Americans say the stress of this election has made them physically ill. Others have obsessively tracked polls to soothe their nerves, or bought guns, or researched moving abroad, or retreated to a cabin in the woods. Tension has ratcheted up, as each side believes the other is threatening to usher in the end of America as we know it.

On Tuesday morning in the critical battleground suburbs of Detroit, 57-year-old Karama Mishkoor and her daughter planned to vote, go to work and immediately head home.

Mishkoor, a devout Catholic and immigrant from Iraq, said she fled that country decades ago for peace, stability and freedom, and she’s sad that now this nation seems so shaken. They support Trump, but didn’t put signs in the yard because there’s so much anger. Ashley Mishkoor said she’d seen the partisan vitriol piling up on social media and wondered: What if that cracks open in real life?

“This week is really scary,” she said. “I’m just hoping, whatever way it goes, there’s peace in our country.”

In New York City, too, voter Nurit Dallimore likened the political climate to the “war zone” atmosphere of her native Israel.

“The country is so divided that I feel like it’s not going to be good either way,” Dallimore worried.

A nation already uncertain about its future amid a worsening pandemic, an economic sucker punch and series of police killings that forced a national reckoning on racism is now contemplating the added threat of possible clashes in the wake of Election Day.

Caravans of Trump supporters clogged traffic around the New York metropolitan area this weekend. In Texas, cars and pickup trucks festooned with Trump flags swarmed a Biden campaign bus, sometimes boxing it in. Trump criticized the FBI for investigating the incident, calling the drivers “patriots.” Weeks ago, a group of men were arrested for allegedly plotting to kidnap the Democratic governor of Michigan. Gun sales are through the roof. Some businesses boarded up their buildings.

About 7 in 10 voters say they are anxious about the election, according to an AP-NORC poll last month. Only a third are excited. Biden supporters were more likely than Trump voters to be nervous — 72% to 61%.

But Trump’s supporters, too, said they feel a sense of dread. The president has warned them that if he loses, the country would lurch toward socialism, crime would consume the streets, freedom would buckle under political correctness.

“I feel terrified in a world with Biden, absolutely terrified,” said 69-year-old Susan Spence, a retired teacher in Powder Springs, Georgia. “I’m here because I believe in Americanism, not socialism.”

As the coronavirus crisis surges to more than 9 million infections and 230,000 dead, the election for many is a referendum on how Trump has handled the pandemic. In the final days of the campaign, he has continued to downplay the toll it has taken, and many of his supporters say they find no fault in his response.

Olivia Tomlin, a 70-year-old in Nashville, said she lost family members to the virus, and still she supports the president.

“I voted for Trump because I think he was treated unfairly over the coronavirus, and I don’t think it’s anyone’s fault. I think it’s something that happened that we couldn’t control," she said. “I still think it was beyond our control.“

But Haydee Gregeda arrived Tuesday on her 75th birthday at a polling place in Brooklyn, using a walking stick and holding tight to her daughter’s arm. She has had trouble walking since spending more than two weeks in an ICU battling coronavirus.

“The president didn’t pay attention to us, so where are we heading?” she asked. “Thousands and thousands more will die.”

Early voting numbers suggest 2020 will shatter voter turnout records. Trump has alleged that widespread absentee voting will lead to fraud, though there is no evidence to support that claim.

In a rural stretch of upstate New York, Jim Czebiniak, 72 years old and semiretired, arrived to vote Tuesday at the town hall.

In Macomb County, Michigan, Terry Frandle hung Trump banners outside his house and noticed that neighbors who used to stop to chat crossed to the other side of the street, not even offering a “hello.” Some drivers wave, some flip the bird. He doesn’t blame Trump for the discord — he blames Democrats and the media for failing to give Trump a fair shake, he said.

“I just don’t trust anything anymore,” he said — except for what he hears directly from Trump. He didn’t trust the mailed ballots either, so voted in-person on Election Day.

In suburban Reston, Va., Michelle Scheatzle, 47, said casting her ballot for Trump Tuesday made her less anxious, because she felt she did her part. She feels like pressure has been boiling up, and she expects protests and unrest as the days unfold.

In Lexington, Kentucky, too, 26-year-old Jonaé Collins anticipated trouble this week. She never got her absentee ballot in the mail, so planned to go polls Tuesday afternoon. She was nervous. She wasn't sure how the crowds would act and how the discord in the country would play out after.

“I feel like with whoever wins, there’s going to be outrage and that kind of scares me,” she said.

In West Philadelphia, James “Sekou” Jenkins, a 68-year-old retired carpenter and mechanic, said he voted in person for Biden “to get that nut out of the White House.” Jenkins fought for civil rights in the 1960s, and he said he feels like Trump is “drawing battle lines.”

Mark Creighton in Lexington, South Carolina, voted for Trump in 2016, but he's come to agree with Jenkins.

“Trump’s a maniac. He’s an embarrassment to this country,” said Creighton, 46, who voted for Biden as well as Sen. Lindsey Graham’s Democratic challenger Jaime Harrison. Graham, he said, was Trump’s puppet, and that “says a lot about his character.”

He rebuked the president for inciting violence and refusing to condemn white supremacy.

Trump at a recent debate told a far-right group to “stand back and stand by.”

As a Black woman, Charlotte Moss, 64, of Oakland County, Michigan, decided not to live in fear. She had become increasingly concerned about emboldened militant racist groups. It had once seemed outrageous that leaders would stoke racial tensions to pit Americans against each other, maybe even violently. But that doesn’t seem so outrageous anymore, she said.

She had never owned a gun, but about a month ago, bought one.

“Hatred is on the frontlines. People aren’t afraid to be hateful anymore,” said Sadiyyah Porter-Lowdry as she cast her ballot Tuesday in Charlotte, North Carolina. “It feels a bit different, but it also feels very much the same.”

A lot of people were afraid to vote on Election Day, she said.

But she didn’t want fear to stop her, so she marched into a Baptist church to cast her ballot.