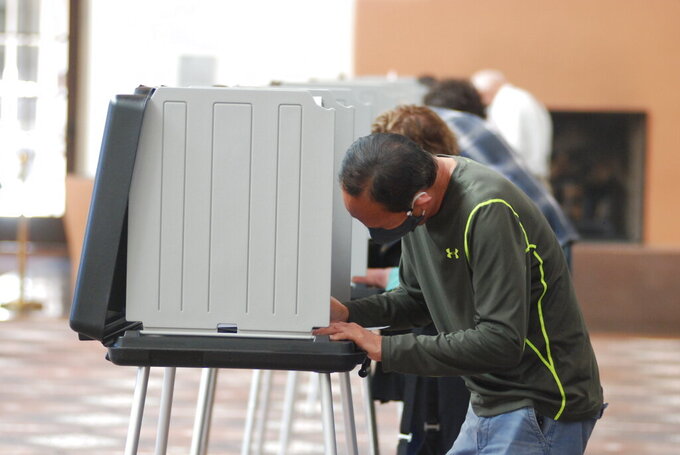 Will Halm, foreground, joins a steady stream of voters to participate in the first day of balloting in New Mexico, at the Santa Fe Convention Center on Tuesday, Oct. 6, 2020, in Santa Fe. Halm said he voted in-person and early to ensure his ballot counts and avoid crowds as a safety precaution against COVID-19. Election officials are witnessing a massive surge in absentee ballot requests. (AP Photo/Morgan Lee)

SANTA FE, N.M. (AP) — Election authorities in New Mexico braced Monday for a final day of in-person voting and absentee-ballot deliveries as Democratic candidates sought to extend their domination in federal elections and Republicans attempted to reclaim a footing in Congress and help reelect the president.

New Mexico has open races for a U.S. Senate and northern congressional seat, with a hard fought rematch in the southern 2nd congressional district along the U.S. border with Mexico.

Election Day will arrive amid surging daily coronavirus infections and deaths in the state.

The seven-day rolling average of daily new, confirmed COVID-19 cases has risen over the past two weeks from 517 new cases per day on Oct. 18 to 779 new cases daily on Sunday. Average daily death have more than doubled to nearly eight during the same period.

Participation in early and absentee voting prior to Election Day surpassed 770,000 on Sunday — nearly exceeding the entire ballot tally in of 804,00 in 2016, according the the secretary of state's office.

In-person voting resumes Tuesday with absentee ballots due by 7 p.m. as polls close for votes to be counted.

Registered Democrats favored absentee balloting and accounted for 48.8% of votes as of Sunday, while Republicans cast 34.7% of the absentee votes. New Mexico has about 1.3 million registered voters.

In the final days of campaigning, flag-waving supporters of President Trump caravanned in vehicles through the state's largest metro area in Albuquerque and suburban Rio Rancho.

Leading New Mexico Democrats held an online rally for volunteers as they canvass swing states in the presidential election by phone.

“We don’t want to wake up and see Donald Trump gloating that he’s been reelected for another four years,” Democratic state House speaker Brian Egolf said. “That feeling, that we all felt in the pit of our stomach in 2016, would be unbearable if it’s repeated.”

Republican congressional challenger Yvette Herrell of Alamogordo touted Trump's endorsement of her campaign and said a Biden victory would put the U.S. “probably on a fast track to socialism — one size fits all."

“Really what we're fighting for on Nov. 3, now, is our one nation under God,” Herrell said.

In southern New Mexico, all eyes were on the congressional swing district race between Herrell and first-term U.S. Rep. Xochitl Torres Small in a rematch of 2018. Trump dominated the district’s vote in 2016 as Herrell lost the 2nd District vote in 2018 by fewer than 4,000 votes.

Trump held a 2019 campaign rally in Rio Rancho and in July of this year deployed federal agents to Albuquerque as he criticized major Democratic-run cities for their records on crime and public safety.

Democrat Joe Biden did not visit New Mexico, where Hillary Clinton won by 8 percentage points in 2016.

In the race to succeed the retiring Sen. Tom Udall, six-term U.S. Rep Ben Ray Luján is being challenged by Republican Mark Ronchetti, a former television meteorologist who has hitched his campaign to the tough-on-crime message.

Luján, undefeated in elections stretching back to 2004, highlighted his northern New Mexico family roots and cast Ronchetti and Republican allies as a threat to consumer medial protections under the Affordable Care Act.

In response to the coronavirus pandemic and surge in absentee voting, local election officials have expanded ballot-counting boards and relocated some voting to larger buildings, such as the Santa Fe convention center, to minimize the risk of infection.

Republican-appointed election challengers clashed last Friday and Saturday with members of an absentee ballot counting board in Dona Ana County, with several challengers were ejected amid disruptions.

Challengers are appointed by political parties in New Mexico to be present as county election boards tally ballots and can dispute the veracity of ballots and procedures for a variety of reasons.

In Dona Ana County, absentee ballots account for 48% of ballots cast by registered Democrats as of Sunday, while registered Republicans mostly voted in-person.

The entire Legislature is up for election with Democrats defending House and Senate majorities.

Voters are choosing two justices on the five-member Supreme Court.

A proposed constitutional amendment would convert the Public Regulation Commission that regulates utility companies from an elected body to an appointed board amid tensions over efforts to modernize the state's electrical grid.