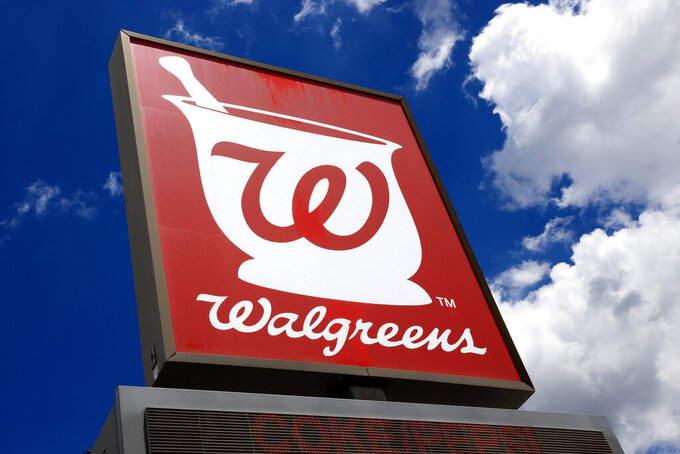 FILE - This June 25, 2019, file photo shows a sign outside a Walgreens Pharmacy in Pittsburgh. On Thursday, Jan. 7, 2021, Walgreens Boots Alliance lost $308 million in its first fiscal quarter due to a big charge tied to its ownership stake in the drug wholesaler AmerisourceBergen. The drugstore chain also saw COVID-19 continue to eat away at its business, particularly in the United Kingdom, but the company’s overall performance topped Wall Street expectations. (AP Photo/Gene J. Puskar, File)

Walgreens Boots Alliance lost $308 million in its first fiscal quarter on a big charge tied to its stake in the drug wholesaler AmerisourceBergen.

COVID-19 also continued to eat away at its business, particularly in the United Kingdom. But the drugstore chain’s overall performance topped expectations and shares climbed after markets opened.

Walgreens executives told analysts Thursday morning that the ongoing pandemic delivered a hit of between $290 million to $325 million to the company's adjusted operating income in the quarter.

That's a lower amount than in the two previous quarters, and company officials have said they expect the pandemic’s impact to subside in the second half of the fiscal year.

“We remain cautiously optimistic for the year as a whole,” said Executive Vice Chairman and CEO Stefano Pessina.

In its fiscal first quarter, Walgreens booked a $1.5 billion charge tied to its ownership share of AmerisourceBergen. Walgreens has a roughly 30% stake in the company, and the charge accounted for Walgreens’ portion of a recent AmerisourceBergen quarterly loss, a spokeswoman said.

Walgreens runs more than 21,000 stores mainly in the United States and United Kingdom. Its drugstores and the stores of other retailers were hit hard last year, particularly in the spring, by a global pandemic that kept customers away.

Walgreens said it still felt the pandemic in its fiscal first quarter, with fewer customer visits and new prescription starts as people stayed away from doctor offices as well. It also saw weaker sales of products to help with colds, coughs and the flu.

In the United Kingdom, sales at Boots stores opened at least a year dropped 9% compared to the previous year. That hit was countered, in part, by growth in Boots online sales.

Walgreens and rival CVS Health Corp. have delivered thousands of COVID-19 vaccinations at nursing homes and other long-term care locations since last month, and the drugstore chains expect to play a big role in doling out shots when they become available to more people later this year.

But Walgreens said gains from those shots will likely be countered in part by pandemic-related lockdowns or restrictions.

Overall, Walgreens booked adjusted earnings of $1.22 per share in the quarter that ended Nov. 30. Revenue grew nearly 6% to $36.31 billion.

Analysts expected, on average, earnings of $1.02 per share on $34.93 billion in revenue, according to Zacks Investment Research.

Walgreens announced last July that Pessina would step down as CEO as soon as the company finds his successor. The chief executive said Thursday that Walgreens' board has been “very active” in its search, and he hopes to have news to share soon.

Shares of Deerfield, Illinois-based Walgreens Boots Alliance Inc. jumped 7% to $46.05 Thursday morning while the Dow Jones industrial average — of which Walgreens is a component — climbed 1%.

Walgreens stock also climbed Wednesday after the company said it would sell its pharmaceutical wholesale business to AmerisourceBergen for $6.5 billion.

Elements of this story were generated by Automated Insights (http://automatedinsights.com/ap) using data from Zacks Investment Research. Access a Zacks stock report on WBA at https://www.zacks.com/ap/WBA