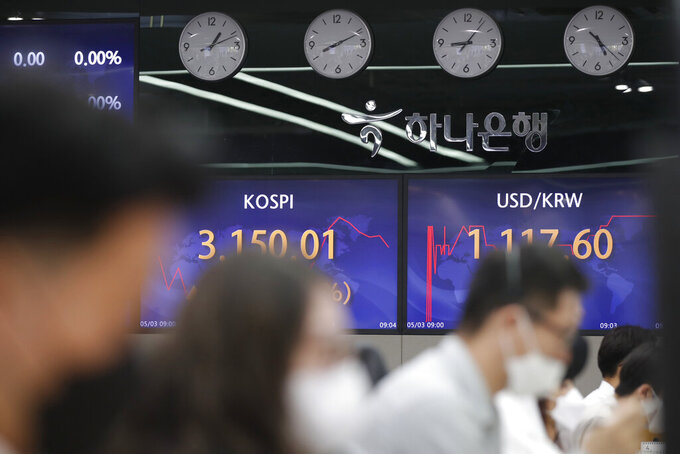 Currency traders work near screens showing the Korea Composite Stock Price Index (KOSPI), left, and the foreign exchange rate between U.S. dollar and South Korean won at a bank's foreign exchange dealing room in Seoul, South Korea, Monday, May 3, 2021. Shares were mostly lower in Asia in thin trading Monday, with many markets including those in Tokyo and Shanghai closed for holidays. (AP Photo/Lee Jin-man)

Stocks are rising on Wall Street early Monday, following markets in Europe higher on the back of strong gains by blue chip companies including Mohawk Industries, The Gap and Halliburton. Warren Buffet’s Berkshire Hathaway leaped to a new record high on news that Vice Chairman Greg Abel has been chosen to succeed Buffett as Berkshire Hathaway CEO. Markets in Tokyo and Shanghai were closed for holidays. Investors remain optimistic that the pandemic is slowly coming to a close, at least in the United States. Oil prices were mixed and the yield on the 10-year Treasury note was steady at 1.62%.

Shares were higher in Europe on Monday after a retreat in Asia, where some markets including those in Tokyo and Shanghai were closed for holidays. London was also closed for the May Day holiday.

Oil prices were mixed and the yield on the 10-year Treasury note was steady at 1.62%

Markets have mostly climbed in recent weeks as investors remain optimistic that the pandemic is slowly and steadily coming to a close, at least in the United States.

The global recovery from the pandemic remains uneven. In much of Asia and many other countries, coronavirus caseloads have surged while vaccination levels remain low.

Despite the decline, the benchmark index ended April with a 5.2% gain, its best month since November 2020, when President Joe Biden was elected. It logged a gain of about 28% between November and April.

More than half of the companies in the S&P 500 have reported their results, which show earnings growth of 54% percent so far, according to FactSet.

Investors will get another big dose of earnings reports to start off May, including results from drugmakers Eli Lilly, Merck, Pepsi, Colgate-Palmolive, the railroad CSX and drugstore giant CVS. Investors will also get April’s jobs report this week.

In other trading, benchmark U.S. crude oil gained 2 cents to $63.60 per barrel in electronic trading on the New York Mercantile Exchange. It gave up $1.43 on Friday to $63.58 per barrel. Brent crude, the international standard, lost 7 cents to $66.69 per barrel.