Walmart sales still surging, but a chill may be on the way 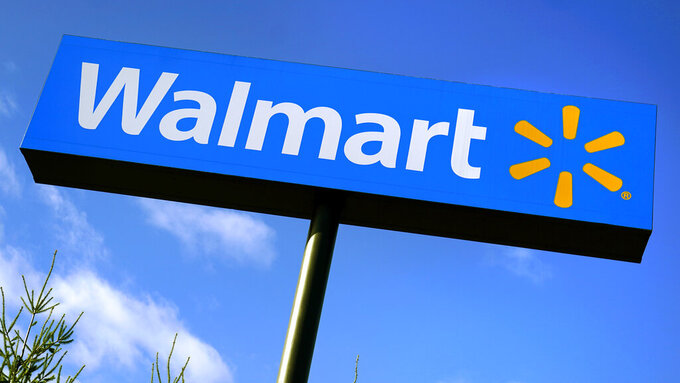 FILE - In this Nov. 18, 2020 file photo, a Walmart store sign is visible from Route 28 in Derry, N.H. Walmart Inc., reported on Thursday, Feb. 18, 2021, that it swung to a loss in the fiscal fourth quarter as the sale of its Japan and United Kingdom divisions weighed on results. (AP Photo/Charles Krupa, File)

NEW YORK (AP) — Walmart is raising wages for 425,000 of its 1.5 million U.S. workers and is investing $14 billion this year to speed up its distribution network as the nation's largest retailer navigates vast industry changes that were accelerated by the pandemic.

Walmart Inc. reported a mixed performance Thursday for the fourth quarter. It swung to a loss partly due to costs related to the pandemic, and the sale of its Japan and U.K. divisions. But sales surged by 7.4% in the period that includes the critical holiday shopping season. Sales at stores opened at least a year rose 8.6%, up from 6.4% in the previous quarter.

While online sales surged 69%, that is down from an 80% spike in the prior period and it was the slowest growth since the pandemic began. The company also said it expects overall sales to moderate this year. Shares dipped almost 6% in early trading.

It is the steepest one-day sell off in almost a year.

Walmart has pushed hard into fast and convenient delivery during the pandemic. But even the massive infrastructure put into place by Walmart in recent years were strained by the crush of orders from millions of people sheltering at home.

That means yet more spending to accommodate shoppers growing increasingly accustomed at shopping from home. The company announced plans this year to build warehouses at stores where self-driving robots will fetch groceries to be picked up within an hour or less by customers. And that was before Thursday's announcement that it was bumping related spending by $14 billion.

“Change in retail accelerated in 2020, “said CEO Doug McMillon. ”The capabilities we’ve built in previous years put us ahead, and we’re going to stay ahead. Our business is strong, and we’re making it even stronger with targeted investments to accelerate growth.”

Walmart said Thursday that it's raising its average hourly wage to more than $15 per hour, up from more than $14 per hour. The pay raises will be concentrated in online and stocking roles. Starting March 13, pay for workers in those jobs will increase to between $13 and $19 an hour, based on a store’s location.

Walmart raised its starting hourly wage from $9 to $11 not too long ago, and that starting wage will remain. Amazon and Target have already increased hourly wages to $15 for all workers.

Walmart Inc. lost $2.09 billion, or 74 cents per share, compared with last year's $4.14 billion profit during the fourth quarter, or $1.45 per share. Adjusted per-share earnings came to $1.39, which was well short of the $1.51 that Wall Street expected, according to a survey by FactSet.

Rolled into those numbers is a $1.1 billion hit from costs related to the pandemic, Chief Financial Officer Brett Biggs on Thursday said translates to a drain about 37 cents per share in earnings, along with the one-time charges from Japan and the U.K.

Walmart announced late last year it would sell off 85% of its Japanese supermarket subsidiary Seiyu in a deal valued at 172.5 billion yen ($1.6 billion). That came a month after it sold its British supermarket chain Asda for 6.8 billion pounds ($8.8 billion), though it maintains a minority stake.

Walmart is on its way to becoming one of the biggest distributors of the COVID-19 vaccine as the U.S. leans more heavily on pharmacies. Walmart operates more than 5,000 pharmacies, of which more than 4,000 are in areas that the government has designated as “medically underserved," or that have limited pharmacy options.