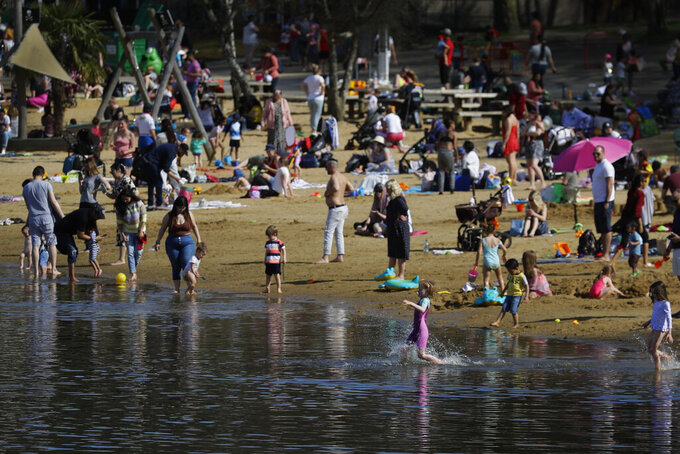 People enjoy the warm weather at Ruislip Lido in London, Tuesday, March 30, 2021. Temperatures in parts of the UK are expected to be significantly warmer this week as families and friends are reunited and outdoor sporting activities are allowed to resume in England. (AP Photo/Kirsty Wigglesworth)

BRUSSELS (AP) — Much of northwest Europe is basking in unusually warm weather on Wednesday, prompting many people to throw caution to the wind despite a worrying uptick in coronavirus cases in parts of the continent.

Temperatures in Belgium, which is facing a resurgence of the virus, have never been so high so early in the year, while those in England, where restrictions are being loosened following a dramatic fall in new cases, could on Wednesday nudge the all-time March high.

In Belgium, the mercury has hit 24.5 degrees Celsius (76 Fahrenheit), prompting thousands of people to head to beaches and parks. The fine weather is expected to continue until Friday and the start of the Easter weekend.

Good news for the 11.5 million Belgians craving sun after a gloomy winter, but a real worry for the government struggling to deal with a third wave of infections.

Though it's proven that the virus is far less easy to catch outdoors, there are worries that traveling could lead rise to more infections.

In response to the number of passengers on its trains, Belgium's national rail company, SNCB, has been forced to activate a “stop-and-go” system to prevent travelers in several train stations from boarding packed-out trains.

Currently, residents in Belgium are banned from traveling abroad but can move freely across the country. A night-time curfew is in place.

Many did not resist the appeal of a grand day out to North Sea beaches, especially after the government decided last week to shut down schools for an extra week before the Easter school break in a bid to slow infections.

That move could ultimately backfire.

“It's too crowded. And you don’t have to be a great scientist to predict that," Western Flanders Governor Carl Decaluwe told Het Niewsblad newspaper.

Both Decaluwe and the SNCB are now advising against trips to the coast, but the situation in big cities is also a source of worry.

In Brussels, for instance, crowds gathered in one of the city’s largest parks to enjoy al fresco drinks and outdoor games. Despite restrictions limiting outside gatherings to four people, bigger groups were spotted sitting on the grass. And although mandatory mask-wearing outdoors is in force, many did not bother with the rule.

Brussels prosecutor's office issued a warning Wednesday following the announcement on social networks of two illegal festivals scheduled to take place on April 1 and 2 in two of the city's parks. The office said police will be deployed and that anyone breaching restrictions could be prosecuted.

One of the parties is promoted by a collective called the Abyss. The group said it does not question the government's strategy but fights for citizens' rights to gather outdoors.

“Some people say we have fallen into a health dictatorship," the group said. “We want to prove that it is still possible to live and therefore to celebrate even in the midst of a pandemic, as our grandparents did during the war."

Belgium has reported over 876,000 confirmed coronavirus cases and almost 23,000 virus-related deaths. Hospitalizations due to COVID-19 have risen consistently in recent weeks, and the country's health authorities have warned that intensive care unit occupancy could reach a critical level by April 10 if the pace of infections does not slow down.

Parks in the neighboring Netherlands also are getting crowded in the warm spring weather. In the city of Utrecht, authorities have begun painting circles on the grass in parks in an attempt to get visitors to maintain social distancing when they sit or lie in the sun.

In Amsterdam, the municipality closed the city’s central Vondelpark, saying it was too busy and only letting people out.

Coronavirus infections have been rising for weeks in the Netherlands, despite a months-long tough lockdown.

Many parts of the U.K. are enjoying the turn of the weather, but the coronavirus backdrop in the country is very different to elsewhere in Europe. The rise in temperatures toward the all-time March high of 25.6 Celsius (78 Fahrenheit) recorded in 1968 has come at a time when restrictions on socializing have been eased following a near three-month lockdown and the rapid rollout of vaccines.

Restrictions on gatherings were eased on Monday, and groups of up to six, or two households of any size, can meet in parks and gardens once more, while outdoor sports facilities can reopen. Face masks are not required in most outdoor settings in England.

With the fine weather set to be short-lived, there is clear evidence that some people are stretching the rules to the limit.

Adam Jones said he saw a “couple of thousand” people in Cannon Hill Park, to the south of the central England city of Birmingham, while out walking with his girlfriend on Tuesday evening.

“We did one lap of the park and by the time we were leaving it looked like a festival,” the 27-year-old said.

Local police said no fines were issued but that there would be extra officers in the area on Wednesday to ensure that the rules are being abided by.

“We have come so far, don’t blow it now,” he said on Twitter.

The easing was sanctioned after a dramatic fall in new coronavirus cases over the past few weeks that has seen the U.K. go from being the European country with the worst outbreak at the start of the year to one with one of the lowest rates of infection in the whole continent.