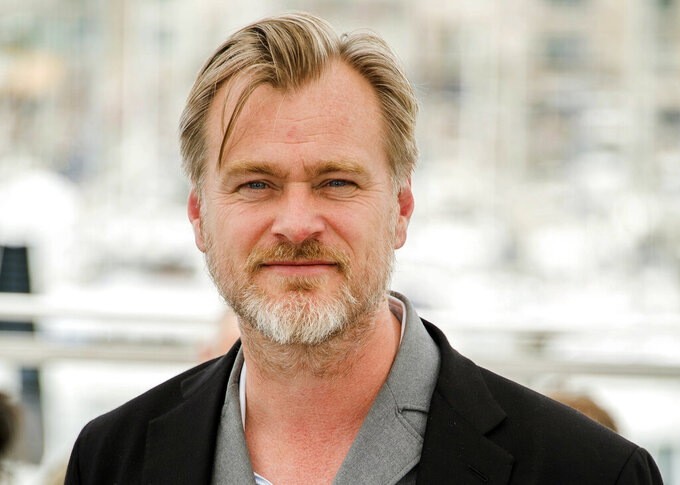 FILE - In this May 12, 2018, file photo, director Christopher Nolan poses during a photo call at the 71st international film festival in Cannes, southern France. Warner Bros. says it will release Nolan's latest film, the sci-fi espionage spectacle “Tenet," in theaters on July 31, 2020. The release date has been closely watched because so many other releases during the film industry's blockbuster-filled summer season have been delayed due to the coronavirus pandemic. (Photo by Arthur Mola/Invision/AP, File)

The studio said it would delay the release by two weeks and instead re-issue Nolan's 2010 sci-fi blockbuster “Inception” in mid-July.

The release date for “Tenet” has been closely watched in all corners of the film industry, which has faced shuttered theaters due to the coronavirus since mid-March. Movie theaters plan to reopen in July for a vastly different summer season than the one the industry had planned.

The Marvel film “Black Widow” and the ninth installment in the “Fast & Furious” franchise, both expected to arrive in the early summer, have delayed their releases.

Warner Bros. also announced Friday that “Wonder Woman 1984,” a sequel to its 2017 hit, would shift from an August release to Oct. 2.

“Tenet” will arrive in theaters a week after Disney's live-action version of “Mulan” is released on July 24.

When the studio released the film’s trailer in May, it didn’t include a release date, simply stating, “Coming to theaters.” The film stars John David Washington, Robert Pattinson, Elizabeth Debicki and Michael Caine.

AMC Theaters, the world’s largest theater operator, said this week it expects to have at least 97% of its locations open by mid-July. The National Association of Theater Owners, the trade group that represents exhibitors, expects some 90-95% of cinemas around the world will open then as well.

Rather than packing multiplexes, AMC says it will keep its cinemas 25-50% full to ensure social distancing. Those won't be the only changes. Concessions will ordered via an app and theaters will undergo regular cleanings, AMC has said.