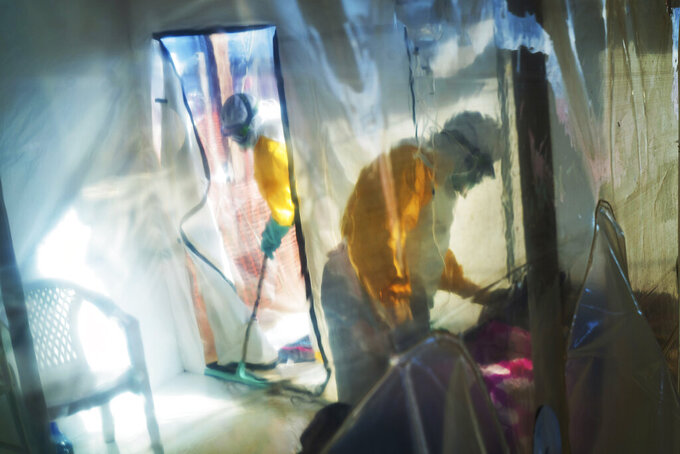 FILE - In this July 13, 2019, file photo, health workers wearing protective suits tend to an Ebola victim kept in an isolation tent in Beni, Democratic Republic of Congo. The task of vaccinating millions of people in poor and developing countries against COVID-19 faces monumental obstacles, and it's not just a problem of affording and obtaining doses. Rumors flew about the Ebola vaccines, including the idea they were meant to kill people, said Dr. Maurice Kakule, an Ebola survivor who worked in vaccination campaigns. Similar suspicions are spreading about the COVID-19 vaccine, he said. (AP Photo/Jerome Delay, File)

DAR MANGI, Pakistan (AP) — Arifullah Khan had just administered another polio vaccine when the gunfire blasted from the nearby hills.

“It happened so suddenly. There was so much gunfire it felt like an explosion,” he said, recalling details of the attack five years ago in Pakistan’s Bajaur tribal region near the Afghan border.

A bullet shattered his thigh and he fell to the ground. His childhood friend and partner in the vaccination campaign, Ruhollah, lay bleeding on the ground in front of him.

“I couldn’t move,” Khan said. “I watched him lying right in front of me as he took his last breath.”

In Pakistan, delivering vaccines can be deadly. Militants and radical religious groups spread claims that the polio vaccine is a Western ploy to sterilize Muslim children or turn them away from religion. More than 100 health workers, vaccinators and security officials involved in polio vaccination have been killed since 2012.

The violence is an extreme example of the difficulties many poor and developing countries across Asia, Africa, the Middle East and Latin America face as they tackle the monumental task of vaccinating their populations against COVID-19.

It’s not just the problem of affording vaccines or being at the back of the line behind wealthy countries in receiving them.

Poor infrastructure often means roads are treacherous and electricity is sporadic for the refrigerators vital to preserving vaccines. Wars and insurgencies endanger vaccinators. Corruption can siphon away funds, and vaccination campaign planners must sometimes navigate through multiple armed factions.

“The most challenging areas ... are conflict settings, where outbreaks of violence hinder vaccinations, and areas where misinformation is circulating, which discourages community participation," said UNICEF’s deputy chief of global immunization, Benjamin Schreiber.

Many nations are relying on COVAX, an international system aimed at ensuring equitable access to vaccines, though it is already short on funding.

UNICEF, which runs immunization programs worldwide, is gearing up to help procure and administer COVID-19 vaccines, Schreiber told The Associated Press. It has stockpiled half a billion syringes and aims to provide 70,000 refrigerators, mostly solar powered, he said.

The agency aims to transport 850 tons of COVID-19 vaccines a month next year, double its usual annual monthly rate for other vaccines, UNICEF’s executive director Henrietta Fore said in a statement.

The situation can vary widely from country to country.

Mexico is expected to start immunizations soon. The military will handle distribution, and the government has promised free vaccines for Mexico’s nearly 130 million inhabitants by the end of 2021.

Meanwhile, Haiti, the Western Hemisphere’s poorest country, has yet to announce any vaccination plans. Health experts worry that widespread rumors could set back vaccinations — including claims that hospitals will give fatal injections to inflate COVID-19 death figures and receive more foreign aid.

The African Centers for Disease Control and Prevention is leading a continent-wide effort to vaccinate Africa’s 1.3 billion people in 54 countries. The agency is coordinating efforts to obtain doses and seeking World Bank help in funding — estimating it will take $10 billion to acquire, distribute and administer the vaccines.

The aim is to vaccinate 60% of Africa’s population within two years — some 700 million people — more than the continent has done in the past, said John Nkengasong, director of the African CDC.

“The time for action is now,” said Nkengasong. “The West cannot defeat COVID-19 alone. It must be defeated by all over the world, and that includes Africa.”

The country has overcome Ebola outbreaks with vaccination campaigns. But it struggled in eastern Congo, where Allied Democratic Forces rebels stage frequent attacks and other armed groups vie for control of mineral riches.

Rough terrain and insecurity meant vaccinators had trouble getting to all areas. Some came under attack.

Rumors flew about the Ebola vaccines, including the idea they were meant to kill people, said Dr. Maurice Kakule, an Ebola survivor who worked in vaccination campaigns. Education programs overcame much of the resistance, but similar suspicions are spreading about the COVID-19 vaccine, he said.

In Beni, the area’s main city, Danny Momoti, a trader, said he would take the vaccine because of his work. “I need this COVID-19 vaccination card to be accepted in Dubai and elsewhere where I go to buy the goods for Beni,” he said.

In Yemen, the health system has collapsed under six years of war between Houthi rebels who control the north and government-allied factions in the south.

Yemen saw its first outbreak of polio in 15 years this summer, centered in the northern province of Saada. Vaccinators haven’t been able to work there the past two years, in part because of security fears, UNICEF said. Agencies rushed to give new inoculations in parts of the north and south in November and December.

Cholera and diphtheria have been rampant, and once again, Yemen faces a new surge in hunger. U.N. officials have warned of potential famine in 2021.

No plans for COVID-19 vaccinations have been announced yet, whether by the Houthis, southern authorities or WHO and UNICEF.

Only half of Yemen’s health facilities remain functional. Roads, power networks and other infrastructure have been devastated. The Houthis have hampered some programs, trying to wrest concessions from U.N. agencies, including blocking a shipment of cholera vaccines amid a 2017 outbreak.

“Even the mildest and normally preventable diseases can prove fatal due to a lack of health care access in a conflict setting,” said Wasim Bahja, the Yemen country director for International Medical Corps.

In Pakistan, public distrust was fueled when the CIA in 2011 used a scam vaccination program to identify the hideout of al-Qaida leader Osama bin Laden, leading to the special forces raid that killed him.

Pakistan, Afghanistan and Nigeria are the only countries in the world where polio is still endemic. There have been 82 new polio cases this year alone, largely because vaccinations were suspended due to the pandemic, said Dr. Rana Safdar, who coordinates the polio vaccination campaigns.

The Bajaur region, where Khan was shot, remains one of the more dangerous areas, Safdar said.

Khan tried to explain the deep mistrust in his region. Deeply conservative tribal elders “believe the vaccine is the reason the young people who were given it as children are disrespectful and show little concern for Islamic traditions and values.”

“Everyone is scared” of COVID-19, he said. “But they are suspicious of Western things.”

Khan said he signed up to administer polio vaccines because he was paid the equivalent of $56 for just a few days’ work. “I needed to feed my family.”

He will likely sign up to deliver COVID-19 vaccines as well.

“But first I would check if there is any danger there," he said.