Washington pulls out of Pac-12 title game, replaced by Ducks 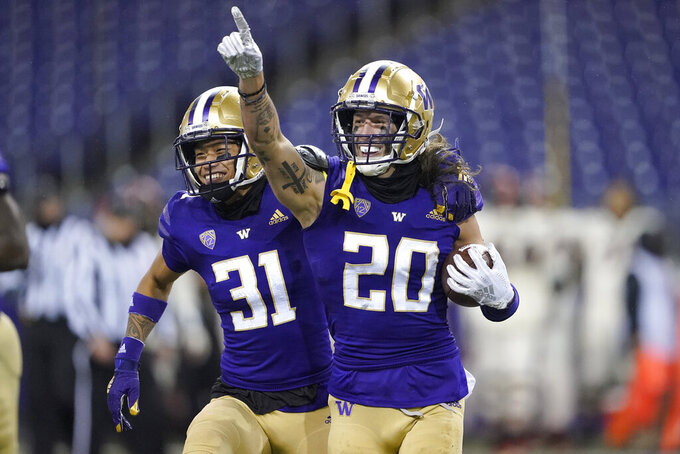 FILE - Washington's Asa Turner (20) celebrates with Kamren Fabiculanan (31) after Turner intercepted a pass in the final minute of an NCAA college football game against Oregon State in Seattle, in this Saturday, Nov. 14, 2020, file photo. Washington won 27-21. Washington has pulled out of the Pac-12 football championship game due to COVID-19 issues in the Huskies program, and Oregon will now play No. 13 USC for the conference title on Friday instead. Washington (3-1) announced Monday, Dec. 14, 2020, it is withdrawing from the championship game after determining the Huskies did not have at least 53 scholarship players available and did not meet the minimum number of scholarship athletes at specific positions.(AP Photo/Ted S. Warren, File)

SEATTLE (AP) — Washington has pulled out of the Pac-12 football championship game due to COVID-19 issues in the Huskies program, and Oregon will now play No. 13 USC for the conference title on Friday instead.

Washington (3-1) announced Monday it is withdrawing from the championship game after determining the Huskies did not have at least 53 scholarship players available and did not meet the minimum number of scholarship athletes at specific positions.

Huskies coach Jimmy Lake said the entire team is isolating as a precaution and another round of testing for the entire team is scheduled for Tuesday. Lake said Washington did not expect to have any offensive linemen — scholarship players or walk-ons — available to play this week because of positive tests and contact tracing.

Washington had to cancel its game last weekend against Oregon (3-2) that would have determined the Pac-12 North champion due to COVID-19 cases in the program. Rob Scheidegger, Washington's associate athletic director for health and wellness, said that while the Huskies have dealt with sporadic positive cases for a couple of weeks, there was a spike last Tuesday that led to last week's pause in practice.

“At that point, the reason why we were being super proactive is because we wanted to be able to play against Oregon and obviously we wanted to be able to play moving forward,” Scheidegger said. "But we want to do that the right way. ... Our path back was to wait until our tests brought back negative results and we just haven’t been able to get to the point where we have all negative results on our tests.”

Washington was named Pac-12 North champ by virtue of having a better winning percentage than Oregon. The Huskies had games against California and Oregon canceled due to COVID-19 issues, and their game with Washington State became a game against Utah due to the Cougars' virus problems.

Now the Ducks, the preseason Pac-12 favorites, will take a two-game losing streak into the title game, and Colorado is left without an opponent this weekend.

The Pac-12 scheduled games for its teams not involved in the championship and had planned to have Oregon and Colorado (4-1, 3-1 Pac-12), second to USC in the South, meet Saturday at the Los Angeles Coliseum.

If USC had not been able to play, Colorado would have been its replacement.

Currently there are no Pac-12 teams available for CU to play. On Sunday, just a few hours after the Pac-12 released its final-week matchups, the game between Arizona and California was canceled due to virus-related issues with both schools.

Colorado could schedule another game outside the conference for Saturday, but the Buffaloes also need to remain on standby for the Pac-12 title game until later in the week.

“(The players) were completely crushed that we could not play last week, and they are devastated now that we cannot play this Friday,” Lake said. “So we’re extremely excited at the possibility of getting everybody healthy first and foremost, and then seeing which game that is and trying to go out there and bring that bowl game championship trophy back here.”

Meanwhile, Stanford on Sunday became the first Pac-12 team to say that it will not play in a bowl if invited. The Atlantic Coast Conference has already had three schools — Boston College, Pittsburgh and Virginia — announce they will opt out of bowl season.

In the Southeastern Conference, No. 10 Georgia's final homecoming of the season against Vanderbilt was canceled because the Commodores fell below roster minimums due to COVID-19 protocols.