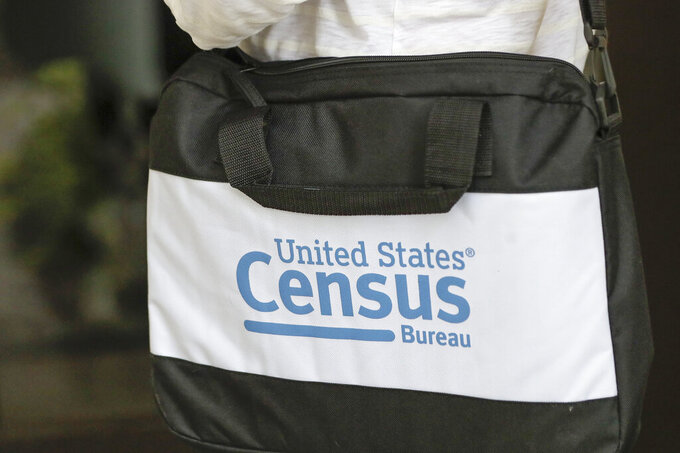 A briefcase of a census taker is seen as she knocks on the door of a residence Tuesday, Aug. 11, 2020, in Winter Park, Fla. A half-million census takers head out en mass this week to knock on the doors of households that haven't yet responded to the 2020 census. (AP Photo/John Raoux)

ORLANDO, Fla. (AP) — More than a dozen laptop computers used for an early phase of the 2020 census were lost, stolen or missing last year, and they may have contained personal information whose confidentiality is protected by federal law, according to an agency watchdog.

A management alert issued last week by the Office of Inspector General said the U.S. Census Bureau was unaware of the missing laptops from last year's address verification process, which preceded the start of the once-a-decade head count of every U.S. resident earlier this year, until the watchdog alerted them.

The report cited communications problems between the bureau, its contractor and subcontractor staff. After the address-canvassing phase ended last October, the 55,000 laptops used for the verification were supposed to be shipped to a contractor so they could be scrubbed of information.

While the laptops used for verifying addresses were encrypted, there's no way of knowing with certainty that remote commands to wipe the missing computers clean of information were successful, the report said.

The number of missing laptops could be higher, and the bureau must do a better job of overseeing the equipment that currently is being used for the most labor intensive part of the 2020 census — when up to 500,000 door-knockers are heading to homes that haven't yet answered the census questionnaire.

Widespread door-knocking by census takers started last week and will continue through the end of September. The census takers are equipped with 585,000 smartphones and tablets to take down the answers of the respondents whose households they knock on. The 2020 census will help determine the distribution of $1.5 trillion in federal spending and how many congressional seats each state gets.

Meanwhile, eight Democratic U.S. senators on Monday asked the U.S. Government Accountability Office to examine how the 2020 census is being conducted compared to its original plan, and the performance of the 2010 census, in light of the recent decision to end the count a month earlier than planned.

The door-knocking phase was supposed to start in May and wrap up at the end of July, but the pandemic pushed the start for most census takers back to August with a deadline for wrapping up the head count at the end of October.

The Census Bureau recently announced it would end the count a month early, at the end of September, after requests for deadline extensions stalled in Congress. The inaction in the Republican-controlled Senate coincides with a memorandum President Donald Trump, a Republican, issued last month to try to exclude people living in the U.S. illegally from being part of the process for redrawing congressional districts.

“We believe that truncating data collection operations during a global pandemic could cause a massive undercount in historically hard-to-count areas, including Native American, rural, and immigrant communities," said the letter to the GAO from Democratic members of the Senate Committee on Appropriations.

The letter followed a request last week from the Office of the Inspector General for information about how the decision to end the census early was made and who was involved in the decision-making.