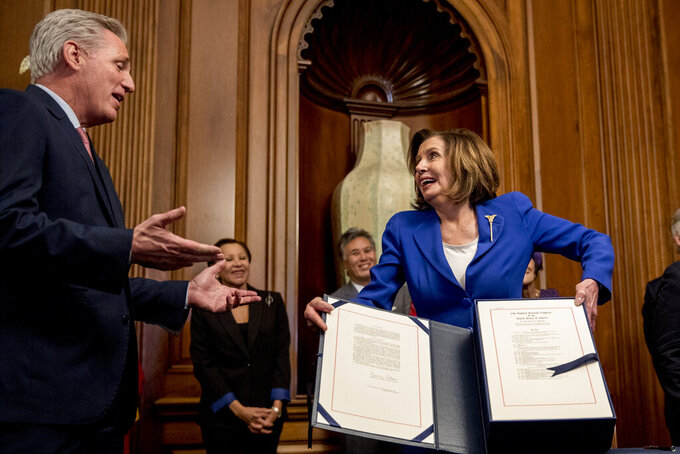 House Speaker Nancy Pelosi of Calif., right, speaks with House Minority Leader Kevin McCarthy of Calif., left, as she holds up the Coronavirus Aid, Relief, and Economic Security (CARES) Act after signing it on Capitol Hill, Friday, March 27, 2020, in Washington. The $2.2 trillion package will head to head to President Donald Trump for his signature. (AP Photo/Andrew Harnik)

WASHINGTON (AP) — Congressional oversight of about $2 trillion for the coronavirus crisis began to take shape Friday as three members were appointed to a congressional commission that will monitor how the money is spent.

Sen. Pat Toomey, R-Penn. and Reps. French Hill, R-Ark., and Donna Shalala, D-Fla., were added to the five-member Congressional Oversight Commission by congressional leaders. They join Bharat Ramamurti, a former Democratic Senate aide who until Friday has been the panel's sole appointee.

With four out of five members appointed, the congressional commission is further along than three other watchdogs created to oversee the massive pot of spending, They are all in limbo even as President Donald Trump's administration and Congress begin to pump unprecedented sums into the economy.

A board of inspector generals designed to track the money is in disarray after President Donald Trump ousted its chairman, and a special official in the Treasury Department is on hold as the Senate isn't around to confirm him. A new congressional commission to investigate the administration's response to the pandemic can't start its work until the House returns to create it.

It’s a halting start for the oversight structure built into the coronavirus relief law, which Democrats demanded in return for empowering a president and administration they deeply distrust.

Sheltering at home with preschoolers, Ramamurti has been writing letters and taking to Twitter to try and jump-start his work, asking the administration for “detailed and timely information” about coronavirus payments. A former aide to Sen. Elizabeth Warren, D-Mass., Ramamurti was appointed April 6 by Senate Democratic Leader Chuck Schumer.

“We must ensure that taxpayer dollars given to industry go to workers’ paychecks and benefits, not be used for CEO bonuses, stock buybacks or dividends,” Pelosi said in a statement.

McConnell and Pelosi will jointly appoint the panel's chairperson. Pelosi said Thursday that the two were trading suggestions for who should take that lead position and to expect an announcement soon..

McConnell said Friday he is naming Idaho Sen. Mike Crapo, who chairs the Senate Banking Committee, to coordinate the Senate’s oversight of the law. He said “”appropriate, objective and nonpartisan oversight will be key to ensuring its dollars and programs find their mark.”

Still, there are few people in place to do that oversight, and looming deadlines for the Trump administration to deliver information to Congress and the public will test the system in the coming weeks. The disclosure duties mostly fall to the Treasury Department and the Federal Reserve, but Trump has set a tone of disdain toward the process.

A slow roll-out is typical for Washington, said Noah Bookbinder, executive director of Citizens for Responsibility and Ethics in Washington, “but this is not a normal circumstance,” with the administration intent on disbursing funds at a rapid clip.

“If oversight is not happening, that’s a problem, because the actual assistance is happening,’’ Bookbinder said.

The president has suggested the oversight provisions were unnecessary, saying even as he signed the law that the administration didn’t have to comply with some of them. He then ousted the official named chairman of the Pandemic Response Accountability Committee, the board of inspectors general established to monitor the unprecedented spending.

Pelosi has moved on her own to form a special oversight panel led by Rep. Jim Clyburn, D-S.C. Unlike other entities, Clyburn's panel will have subpoena power.

Still, no members of the committee have been appointed since Clyburn was named to the post in early April, and it is not clear if Republicans will participate. Pelosi said this week that the House will vote on the Clyburn committee upon its return, currently scheduled for early May.

“With all the money going out, we really need to do it in a timely fashion,” she said.

Trump has nominated one of his White House lawyers, former inspector general Brian Miller, to the new Treasury inspector general position created to track coronavirus relief for industry. But he can't start his work until he is confirmed, and the Senate is also out until early May,

The delays have watchdog groups concerned.