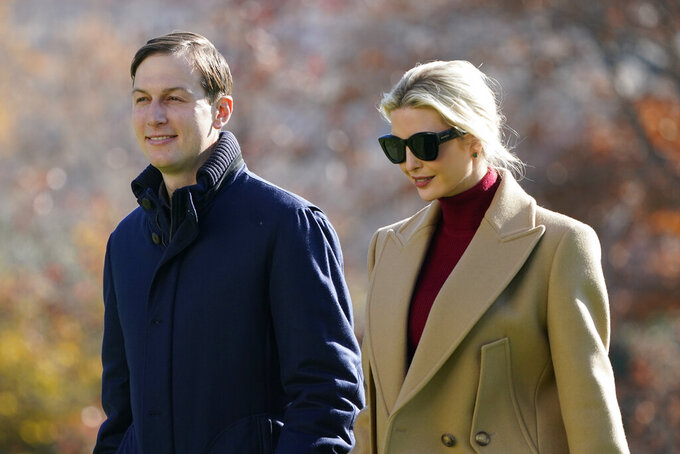 President Donald Trump's White House Senior Adviser Jared Kushner and Ivanka Trump, the daughter of President Trump, walk on the South Lawn of the White House in Washington, Sunday, Nov. 29, 2020, after stepping off Marine One upon returning from Camp David. (AP Photo/Patrick Semansky)

WASHINGTON (AP) — A congressional monitor of federal pandemic aid is raising the possibility of a link between President Donald Trump's son-in-law, Jared Kushner, and a $700 million relief loan to a struggling trucking company.

Bharat Ramamurti, a Democratic member of the four-person Congressional Oversight Commission, raised the possible Kushner connection at a hearing Thursday, as panel members from both parties challenged the Treasury Department’s decision to award the loan to YRC Worldwide. The taxpayer-funded loan was made on the grounds that the company's operations are critical for maintaining national security.

The panel members questioned the decision to deem YRC’s business vital to national security. It was the first and by far the largest loan made under the national security portion of the Treasury Department’s corporate aid program, which has loaned billions to major airlines and smaller air carriers.

YRC received a separate $600 million loan last year from Apollo Global Management and several other lenders that was arranged by Apollo, a big private equity firm that is YRC’s biggest creditor, according to the oversight panel. Apollo co-founder Joshua Harris advised the Trump administration on infrastructure policy in early 2017 and met with Kushner, who is an adviser to the president. Later that year Apollo lent $184 million to Kushner’s family real estate company to help refinance its mortgage on a Chicago building, according to a New York Times report cited by Ramamurti.

Ramamurti asked Treasury Secretary Steven Mnuchin whether he had had contacts with Kushner or his staff regarding the YRC loan. Mnuchin said he had not. Ramamurti then broadened the question to a request for correspondence with anyone in the White House.

“This warrants further investigation,” Ramamurti said. He called the loan to YRC “a fast-tracked, extremely generous loan that just so happened to help” Apollo as YRC’s creditor.

There was no immediate comment on the matter to The Associated Press from Kushner or his staff.

“Apollo was not involved at all in (YRC's) decision to seek the Treasury funds," Apollo spokesperson Joanna Rose said Thursday. “We are a capital provider for thousands of companies. We are one of many lenders to YRC. This is not a company that our funds own or control."

The congressional monitors found that taxpayers could be at risk of losing money on the $700 million investment. YRC has had financial problems for years, well before the onset of the pandemic, and has been at risk of bankruptcy.

Mnuchin defended the loan, saying that YRC meets the criteria for companies deemed essential for national security as the Treasury Department had worked out with the Defense Department and the Office of Director of National Intelligence.

He acknowledged that taxpayers could end up losing the money if YRC fails and doesn’t pay it back. “This was a risky loan,” Mnuchin said, but he added, “We’ve been fortunate that the economy recovered. ... Ultimately Treasury and the taxpayers will be very well compensated.”

Mnuchin noted that, before the loan was approved this summer, several lawmakers had asked the Treasury Department to help YRC in order to save jobs.

Rep. French Hill, R-Ark., a member of the panel who is a former banker, told Mnuchin, “Were I still in finance, I would not have made this loan.”

YRC, based in Overland Park, Kansas, provides transportation and logistics services, such as delivering food, electronics and other supplies to military locations around the country. The Defense Department is a major YRC client, and it’s the leading transportation provider to the Department of Homeland Security.

The national security portion of Treasury’s corporate aid program, with an available pot of up to $17 billion, had been expected earlier this year to be earmarked for hard-pressed aircraft maker Boeing or for General Electric. They were able to tap the private credit markets and didn’t seek government aid.

To qualify for the national security aid, companies should be performing under defense contracts of the highest national priority or operating under top-secret security clearance. YRC apparently didn’t meet either of the criteria but qualified under a “catchall” provision allowing a recommendation and certification from the secretary of defense or the director of national intelligence to be sufficient.

The four-member oversight commission was appointed by congressional leaders of both parties to monitor the spending of some $2 trillion in economic aid enacted by Congress last spring and directed by the Treasury Department and the Federal Reserve.