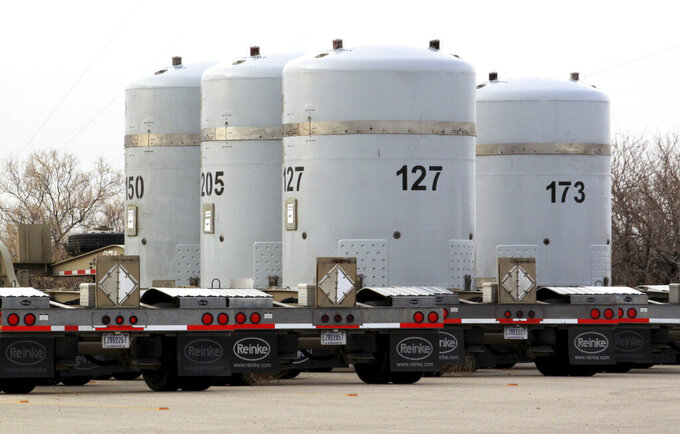 FILE - In this March 6, 2014, file photo, empty nuclear waste shipping containers sit in front of the Waste Isolation Pilot Plant near Carlsbad, N.M. The U.S. government's efforts to clean up decades worth of Cold War-era waste from nuclear research and bomb making at federal sites around the country has chugged along, often at a pace that watchdogs and other critics say threatens public health and the environment. Now, fallout from the global coronavirus pandemic is resulting in more challenges as the Waste Isolation Pilot Plant, the nation's only underground repository for nuclear waste, finished ramping down operations Wednesday, April 1, 2020, to keep workers safe. (AP Photo/Susan Montoya Bryan, File)

ALBUQUERQUE, N.M. (AP) — The federal government's only underground nuclear waste dump could run out of room if the number of drums shipped to the New Mexico site keeps expanding or if a new method for measuring the waste is unraveled as part of a pending legal challenge, according to a nonpartisan congressional watchdog.

The Government Accountability Office in a recent report said better planning is needed at the Waste Isolation Pilot Plant to avoid potential disruptions.

The report specifically points to the need for adding more physical space at the repository before it becomes full, which the U.S. Energy Department estimates could happen as soon as 2025. The agency faces statutory limitations on how much waste can be disposed of at the site.

The repository is at the center of a national multibillion-dollar effort to clean up waste from decades of U.S. nuclear research and bomb-making. Over the last 20 years, tons of waste have been shipped to the site and stashed in salt caverns that have been excavated deep below the New Mexico desert. The idea is that the shifting salt will eventually entomb the radioactive tools, clothing, gloves and other debris that make up the waste.

Work at the repository was derailed in February 2014 after an inappropriately packaged drum of waste from Los Alamos National Laboratory released radiation and contaminated part of the underground facility. Managers restarted operations in 2017 and were attempting to ramp up mining and disposal work before the coronavirus pandemic complicated efforts.

The Energy Department also has been limited to disposing of no more than 10 shipments of defense-related waste per week due to airflow issues resulting from the 2014 contamination.

Delays in building a new ventilation system and utility shaft to address those issues also are concerns.

New Mexico environmental regulators recently denied a request by the federal government to extend temporary authority to continue excavating the utility shaft while the state considers changes to the repository's permit. State officials cited the lack of a plan for completing the shaft and noted an uptick in COVID-19 cases among employees and contractors at the site as reasons for the denial.

The Government Accountability Office acknowledged in its report that the Energy Department is under pressure to make sure it doesn't run out of space, particularly since the federal government's plan for restarting production of the plutonium cores used in the nation's nuclear arsenal will result in a new stream of waste that will need to be disposed of.

The Energy Department has estimated that the repository would need to operate at least another three decades — if not longer — to meet disposal needs.

In 2018, it adopted a new method for counting the volume of waste disposed of at the repository by excluding some of the air space found in certain containers. That effectively lowered the volume of waste already stored there, clearing the way for more future shipments. But nuclear watchdogs challenging the change in court have argued that it was contrary to federal law.

Adding more space also will require new models to be developed. That would trigger a review and approval process by the U.S. Environmental Protection Agency. Additional approvals by state officials also would be required, a process that could take nearly two years.

According to the report, the Energy Department's schedule for excavating more disposal vaults is unreliable. The GAO stated that there are significant risks that could delay the schedule and the Energy Department failed to compensate for the risks by including additional contingency time.

Those risks include delays in building the ventilation system and the utility shaft. The GAO noted that both projects are facing challenges with identifying and overseeing contractors and getting necessary regulatory approvals.