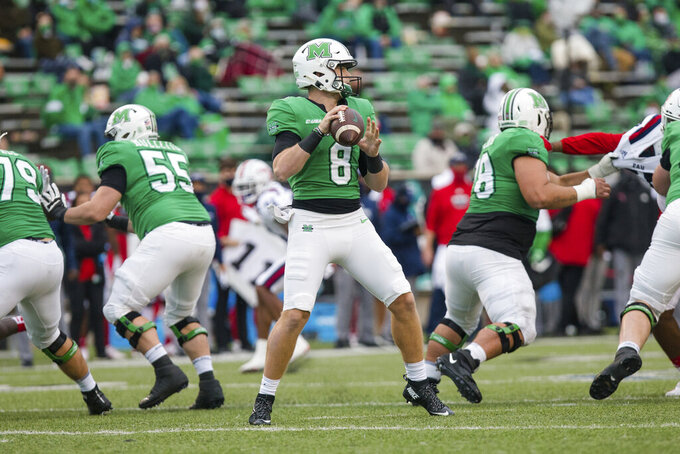 HUNTINGTON, W.Va. (AP) — Redshirt freshman Grant Wells showed some poise in the pocket when No. 22 Marshall faced its first deficit of the season.

Wells threw two touchdown passes, including a 41-yard strike for the go-ahead score, and the Thundering Herd beat pandemic-depleted Florida Atlantic 20-9 on Saturday.

“I just kind of stay in myself,” Wells said. “I’ve proven to myself that I can do everything that (offensive coordinator Tim Cramsey) has asked of me. And not to panic, because at that time we knew we had a lot of football game left to play.

“So just staying within myself and sticking to my reads because as soon as I start outside of my mind or start thinking about the score or anything else, that’s when mistakes start to happen.”

Marshall (5-0, 3-0 Conference USA) managed enough offense to hold off the pesky Owls (1-1, 1-1), who brought 57 players on their first trip of the season, just above the mandated minimum of 53 available scholarship players during the pandemic. The Owls even held a third-quarter lead before Marshall scored the final 13 points.

With FAU missing both of its starting offensive tackles due to the virus, the Owls were limited to 234 yards of offense.

“When you’re down guys and you don’t have everybody, you’ve got to execute," FAU coach Willie Taggart said. "You’ve got to be on point with everything. You can’t panic. I thought our guys wanted it really bad. We weren’t focused enough to do the things we were supposed to do.”

Marshall came up with another solid performance in stopping the run. FAU quarterback Nick Tronti, who ran for 94 yards in the Owls’ only other game on Oct. 3, was held to minus-45 yards on 11 rushes and was sacked five times. The Thundering Herd entered Saturday third in the nation in rush defense at 68.5 yards per game.

“I thought our guys just fought their tails off,” Marshall coach Doc Holliday said. “The defense played lights out.”

Marshall trailed in a game for the first time this season after Vladimir Rivas kicked a 43-yard field goal to put FAU ahead 9-7 midway through the third quarter.

Brenden Knox, the preseason Conference USA player of the year who finished with 101 yards rushing, ran 17 yards on third down on the next series. Wells capped the four-play drive with his long scoring pass to Artie Henry to put Marshall ahead to stay.

A short punt on FAU's next drive set up Marshall inside the Owls' territory, and Shane Ciucci converted a 35-yard field goal for a 17-9 lead.

Wells threw what appeared to be his third interception early in the fourth quarter, but FAU was called for a personal foul in the end zone. The officiating crew did not signal an incompletion, although Taggart said that from his vantage point, the ball appeared to be dropped.

Marshall was given a first down at the FAU 11, leading to a short field goal by Ciucci for the final margin.

FAU had a chance to make it a one-possession game but Tronti threw incomplete into the end zone on fourth-and-5 from the Marshall 17 with a little over 3 minutes left.

Knox was bottled up for much of the game but he occasionally found daylight. Knox took a first-quarter screen pass from Wells and went 58 yards down the right sideline to open the scoring.

FAU: The Owls should be commended for staying in the game as long as they did. A total of 43 players who began fall camp did not make the trip, including 28 related to COVID-19. Five of the Owls' first six games were canceled by the pandemic.

Marshall: The Thundering Herd's offensive line got pushed around by FAU's defensive line. Marshall's 385 yards of total offense was 100 yards below its season average.

While Marshall didn't put on a scoreboard show, the Thundering Herd should hold onto their ranking or even gain a spot or two.