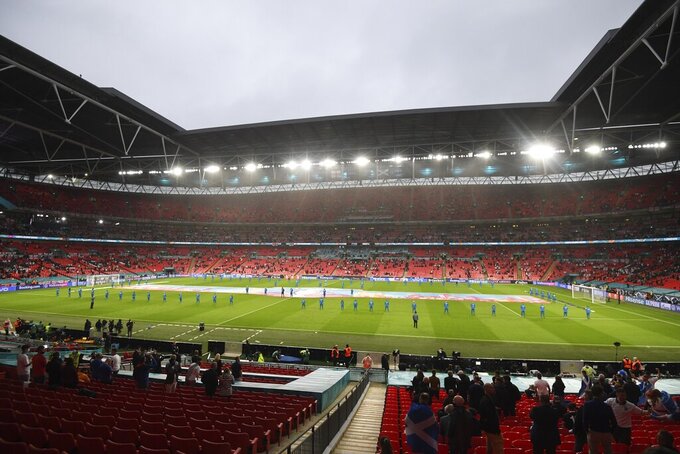 LONDON (AP) — UEFA is in talks with the British government about increasing the attendance at Wembley Stadium to 65,000 for the semifinals and final of the European Championship, people with knowledge of the discussions said Monday.

The government had already agreed to increase the current group-stage capacity of about 22,000 to at least 40,000 for one game in the round of 16 game and the final three matches of the Euro 2020 tournament at the 90,000-seat stadium.

UEFA hopes to increase that further by securing more quarantine exemptions for visitors, including sponsors and VIPs, the people told The Associated Press. The people spoke on condition of anonymity because they were not authorized to discuss private talks.

There are fears Britain is seeing the start of a third wave of coronavirus infections with cases rising to 68,449 over the last seven days. The resurgence, which is the result of the delta variant first identified in India, led Italian Premier Mario Draghi to call for moving the Euro 2020 final away from Britain.

“I advocate that the final should not take place in a country in which the risk of infection is very big,” Draghi said Monday.

Italy’s team has to fly to London this week for a last-16 game against Austria at Wembley on Saturday.

Last week, UEFA said it was in talks with authorities in London about allowing fans of the participating teams to attend the semifinals and final by staying in the country less than 24 hours and staying within bubbles.

UEFA raised the prospect of taking the games from London — with Budapest as a backup — if there was not an agreement regarding fans coming to London.

Tourists from all the non-British nations competing at Euro 2020 have to quarantine for at least five days upon arrival in the country under general pandemic regulations to contain the spread of the coronavirus.