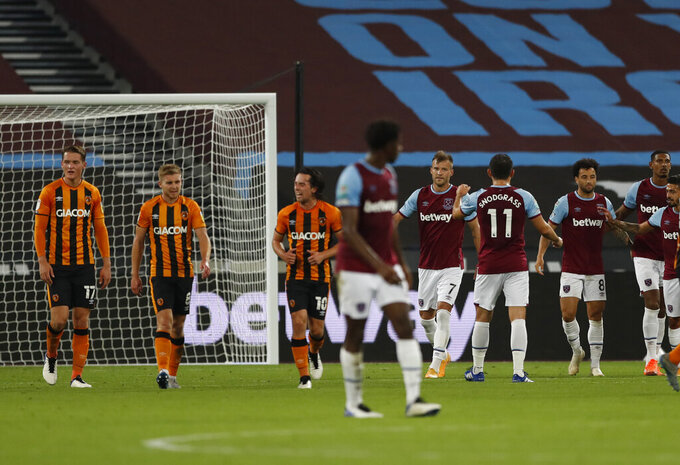 LONDON (AP) — The coronavirus dominated Tuesday's English League Cup schedule as West Ham played despite its coach and two players having tested positive, while Tottenham's game was called off.

West Ham said manager David Moyes and players Issa Diop and Josh Cullen only found out their test results after they had arrived at the London Stadium to play against Hull. Diop and Cullen had been named in the starting lineup.

“The manager and both players immediately left the stadium and have returned home,” West Ham said. “All three, who are asymptomatic, will now follow Public Health England and Premier League guidelines and protocols.”

West Ham did not say when its players and coaches gave their samples to be tested or how much contact Moyes and the two players had with the rest of the team since then. West Ham's last game was a 2-1 loss to Arsenal on Saturday.

Earlier, the match between Tottenham and Leyton Orient was called off two hours before kickoff because Orient players contracted the coronavirus.

“Discussions are ongoing between the relevant stakeholders in regards to the implications of the fixture not taking place,” the English Football League, which organizes the competition, said in a statement.

Orient, a London-based team in the fourth division, may have to forfeit the game if the club is deemed to be unable to fulfil the fixture.

Newly promoted Premier League club West Bromwich Albion lost 5-4 on penalties against second-tier Brentford after the game ended 2-2, with goalkeeper David Raya making the deciding save in the shootout. Defender Branislav Ivanovic made his West Brom debut in the game. Newport produced another surprise result to beat Watford 3-1.