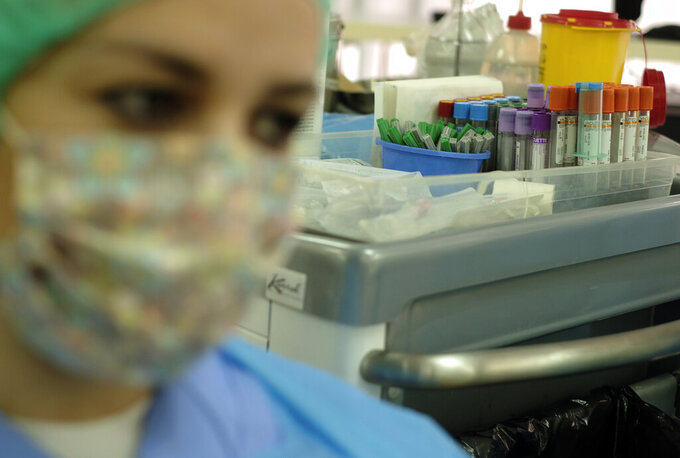 A medical worker wearing protective gear, waits for patients to receive the COVID-19 vaccine in the capital Sarajevo, Bosnia, Wednesday, March 10, 2021. Vaccinations started from a batch of 10,000 doses of the AstraZeneca vaccines donated by neighboring Serbia. (AP Photo/Kemal Softic)

Doctors in Bosnia’s capital of Sarajevo, where the first vaccines arrived Wednesday, warned that infections have “exploded” in recent days and urged people to comply with pandemic regulations. Long queues formed outside COVID-19 wards in city hospitals.

All bars, restaurants and non-essential shops in the Sarajevo canton will be shut over the upcoming weekend.

More than 1,000 new infections and 37 deaths over the past 24 hours were reported on Wednesday.

“These are hard days, and once again we appeal to citizens to be maximally vigilant and take care in order to help us and keep the health system stable,” said Ismet Gavrankapetanovic, head of the Sarajevo General Hospital.

In Serbia, Prime Minister Ana Brnabic said the government-appointed virus crisis body most likely will meet on Thursday to decide on tighter measures for the forthcoming weekend.

The country of 7 million has given more than 1,5 million people at least one dose of the vaccine, which is among the highest rates in Europe. Nonetheless, Serbia is reporting more than 4,000 new infections daily and doctors have described the situation as alarming.

The government has launched a campaign to encourage people who have not yet been inoculated to do so. Experts have blamed the recent surge on the flouting of the rules, and the fact that ski resorts remained open throughout the winter season.

Brnabic also criticized the holding in the past days of two concerts by a popular band at a Belgrade hall, saying authorities will ban all concerts in the future. Brnabic insisted that “we will demand that the organizers be punished.”

In neighboring Montenegro, health authorities said schools will move to remote classes and child care will close along with bars and fitness centers as part of further tightening of pandemic rules in the small nation of 620,000.

Montenegro has had among the highest infection and death rates in Europe with more than 80,000 infections and over 1,000 deaths. Authorities said on Wednesday that if the situation worsens they may ask the European Union to send in medical staff to help.

Further south, in North Macedonia, a nationwide two-week curfew will take effect on Wednesday from 10 p.m. to 5 a.m.

Predrag Milic contributed from Montenegro and Eldar Emric from Bosnia.