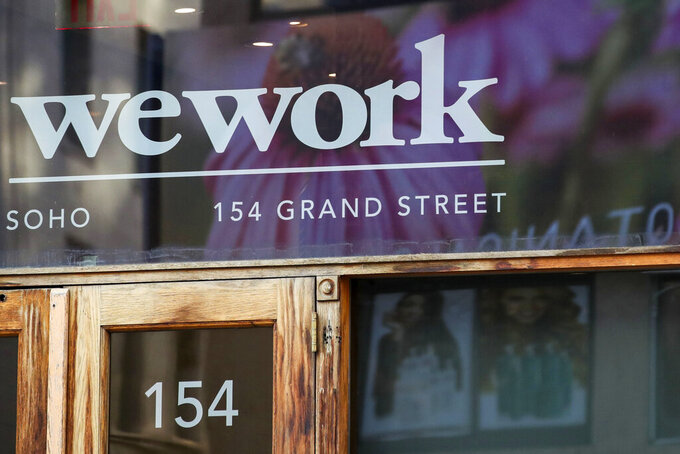 FILE - This Oct. 15, 2019, file photo shows a WeWork logo at the entrance to one of their office spaces in the SoHo neighborhood of New York. WeWork is merging with BowX Acquisition in a transaction that would value the embattled communal office-space company at $9 billion plus debt and take it public, according to a report.The Wall Street Journal said Friday, March 26, 2021, that WeWork would also raise $1.3 billion, according to people familiar with the matter. (AP Photo/Mary Altaffer, File)

NEW YORK (AP) — Uncertainty about demand for office space in a global pandemic is a big risk that investors will have to weigh as WeWork makes a second run at a public stock offering.

But the offering comes as many companies are switching to hybrid work schedules, allowing employees to stay at home part of the time and go to the office only for group meetings or projects. That means firms already locked into leases will have too much space and aren't likely to need WeWork's short-term conference rooms or offices.

“You’re going to find they can accommodate most pop-up meetings inside their office, so they don’t have to go to WeWork,” said Patrick Dore, a former Notre Dame real estate law professor who has handled office space deals in Manhattan.

The announcement Friday comes almost two years after WeWork’s first attempt at an IPO blew up in spectacular fashion, with CEO and founder Adam Neumann being ousted.

The agreement values WeWork at $9 billion plus debt, far below the $47 billion in September 2019 when the IPO fell apart after massive losses were revealed in regulatory filings.

The deal with BowX provides a lifeline to WeWork. Armed with cash raised from investors, SPACs look for private companies to buy so they can easily list stock on an exchange. WeWork said it would also raise $1.3 billion.

During a call with industry analysts on Friday, WeWork said it anticipates strong growth as the economy recovers. The company is forecasting 1.5 million total memberships at some point in 2024. That compares with 476,000 in 2020. Revenue, excluding China, is predicted to climb to $7 billion, more than double last year.

WeWork leases buildings and divides them into office spaces to sublet to members, which include small businesses, start-ups and freelancers who want to avoid paying for permanent office space. The company’s operating expenses were exorbitant and it became reliant on repeated cash infusions from private investors.

“Short-term real estate rental is not a particularly good business,” said Michael Cusumano, professor of technological innovation, entrepreneurship and strategic management at the Massachusetts Institute of Technology. “WeWork is similar to a rental car company that has fleets of cars that nobody is renting.”

Still, WeWork said that during the past year, it has cut costs, shed non-essential ventures and reduced its workforce by 67% from its peak in September 2019. The company said it has focused on landing more longer membership commitments. Only 10% of its members have month-to-month commitments today, while more than 50% have commitments longer than a year.

CEO Sandeep Mathrani, who took over for Neumann, said the company has transformed its business. “As a result, WeWork has emerged as the global leader in flexible space with a value proposition that is stronger than ever,” he said in a statement.

The company was able to get expenses under control and fly under the radar, out of the public eye, as it made huge adjustments after Neumann's departure, said Alex Snyder, assistant portfolio manager for real estate securities at CenterSquare Investment Management.

“They’re in a great position to really succeed from here,” Snyder said.

Other commercial property experts say the rapid economic recovery expected by most economists puts WeWork in a better position than in 2019, when it was one of the most talked-about companies on Wall Street.

There’s the typical post-recession surge in new businesses set up by people who lost their jobs, and “the obvious place to start your business nowadays is in a serviced office,” said Mat Oakley, head of U.K. and European commercial research at Savills.

Oakley said that while leasing volumes are still low, inquiries for serviced office space have been rising since the start of the year.

“There could be a reasonably optimistic story for serviced office providers going forward,” Oakley said.

But Dore said WeWork's business isn't compatible with the virus at present because there are multiple people crossing paths in its buildings, something companies have tried to avoid. “That's why you're not in your own office,” he said.

He said the WeWork IPO is coming too soon because most large office users are still sorting out what they want to do with workers and office space.

Yet he says it's possible that WeWork has a different economic model than two years ago after unloading high-cost leases in many markets. MIT's Cusumano said the model could make money if companies give up a lot of office space, then lease from WeWork for mobile offices or meetings. “That market has existed for at least 25 years,” he said. “But it's not a huge market.”