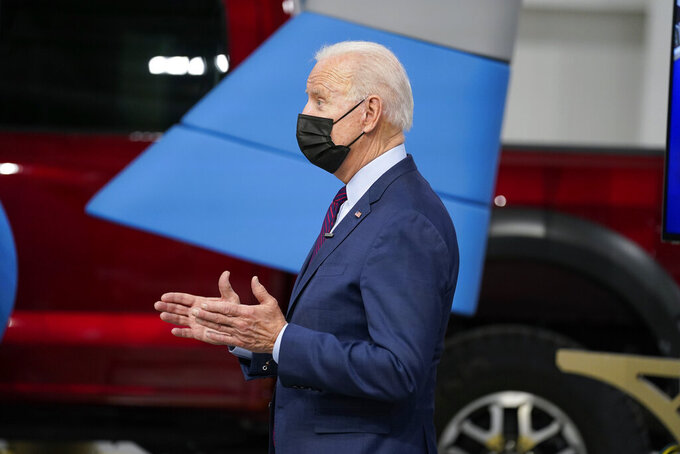 WASHINGTON (AP) — White House officials are seeking to quell anxiety about inflation and the pace of hiring — issuing a memo Tuesday that highlights robust economic gains as the United States gets vaccinated and recovers from the coronavirus pandemic.

The memo, obtained by The Associated Press, said the administration is “focused on an economic strategy of containing the virus and growing the economy from the bottom-up and middle-out. Data suggest that this strategy is working.” It is from Brian Deese, director of the White House National Economic Council, and Cecilia Rouse, chair of the Council of Economic Advisers.

The memo makes the case to senior administration officials and members of Congress that the government's $1.9 trillion relief package has helped boost growth and that workers will return to jobs with “fair wages and safe work environments.” It also argues that President Joe Biden's $4 trillion infrastructure and families plan will lay “the groundwork for strong, durable growth for decades to come."

The administration had until recently been basking in optimism about the economy, only to face a worrisome set of reports that showed a jump in consumer prices and a disappointing level of hiring in April. The memo is an attempt to promote a sunnier narrative and stress the need for additional spending to be paid for with higher taxes on corporations and the wealthy.

Critics seized on the recent economic reports to suggest that the $1.9 trillion relief package was so big it would fuel inflation and to contend that its enhanced unemployment benefits were encouraging Americans to forgo working.

“Democrats insisted on continuing to pay people more not to work,” Senate Republican Leader Mitch McConnell said in a Monday speech. “Instead of an agenda to reopen America, Democrats muscled through policies that would actually prolong parts of this crisis. And that’s what’s happened."

Supply bottlenecks for basic goods such as autos contributed to a 0.8% surge in consumer prices in April, the biggest monthly increase in more than a decade. Fears that inflation could persist came from higher gas prices following the cyberattack on the Colonial Pipeline and shortage of homes being listed for sale.

But the White House memo pointed to positive signs in the inflation report of consumer demand for restaurants, hotel stays, rental cars and airfare — all signs that the U.S. economy could meet expectations by forecasters of growth exceeding 6% this year, the highest rate in nearly four decades.

“This rapid recovery in consumption means that our economy is likely to largely heal by the end of the year," the memo said. "While we expect that supply and demand adjustments across the economy will take some time to sort out, we do not see signs of persistent dislocation or long-term inflation.”

The memo also played down the only modest addition of 266,000 jobs in April, noting that “the economy is creating an average of over 500,000 jobs per month, up from 60,000 per month” before Biden took office.

It does not tackle concerns that the added $300 a week of unemployment benefits has discouraged people from taking jobs. Instead, Biden officials said that COVID-19 remains the most significant barrier for people returning to work and that increased vaccination rates will allow them to come back to the job market.

The memo also suggested that the administration's goal is to ultimately push up wages for workers, even if that puts pressure on businesses that run on tight margins.

“In some cases, employers will raise wages to attract workers," the memo said. "This is a positive development, particularly for lower wage workers who have seen little wage growth over the past decades.”