Where Biden stood, reminders of a failed insurrection 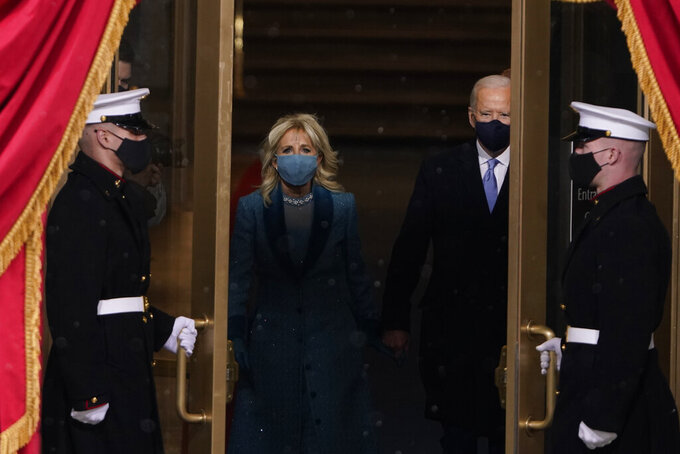 President-elect Joe Biden and his wife Jill, walk out for the 59th Presidential Inauguration at the U.S. Capitol in Washington, Wednesday, Jan. 20, 2021. (AP Photo/Patrick Semansky, Pool)

WASHINGTON (AP) — The reminders of the siege were everywhere.

On the very spot where President Joe Biden delivered his inaugural address, an insurrectionist mob had tried — and failed — to overturn his election just two weeks before. Nearby, at the West Terrace doors, a Capitol police officer was brutally assaulted with a flagpole in a one of the siege's most chaotic moments.

And from the podium, the starkest sight of all: a National Mall mostly empty, dotted with troops, the usual crowd of spectators replaced by a silent field of American flags.

The Associated Press has the privilege of a seat on the inaugural platform every four years in a tradition dating as far back as anyone can remember. But there had never been a ceremony quite like this, in the still-fresh aftermath of a violent challenge to the peaceful transition of power that the inaugural is designed to celebrate.

Solemn in purpose and demeanor, Biden did not work the room — not much, anyway. He was on a clock. At noon, he would become president.

And at that moment, the Democratic-heavy crowd gave the new president hearty applause, with some of the House lawmakers in attendance audibly voicing relief.

Unlike Trump's 2017 inauguration, which featured a speech that promised an end to decades of “American carnage," Biden returned again and again to a theme of national unity.

“I thought that inaugural ceremony today was so filled with energy, spirit and love,” said Hillary Clinton, the former first lady and a losing presidential candidate in 2008 and 2016. She praised young poet laureate Amanda Gorman and entertainers who performed.

The global superstars included Lady Gaga, whose soaring rendition of “The Star-Spangled Banner" left some in the audience agape. Garth Brooks, a country legend and Republican with a huge following in Trump strongholds, led the group in “Amazing Grace."

The blue jean-clad Brooks, obviously elated, almost danced away, but not before greeting the new president and three ex-presidents — with an oops-I-almost-forgot-about-the-pandemic hug with former President George W. Bush.

Republican Sen. James Lankford, from Brooks' native Oklahoma, said the message of grace is just what a riven nation needs.

“He made time when he finished singing to then go personally greet every one of the former presidents there and give them a very non-socially distanced hug to be able to touch base with everybody and to try to set an example for people to say, ‘Hey, let's figure out if we can actually extend some grace to each other during this time.'"

Biden delivered his 21-minute address before a teleprompter in a stand of photographers. It ensured a quick pace and gave Biden helpful hints such as a reminder to “build" to the finish. Biden had just a handful of small verbal stumbles and couldn’t resist adding an unscripted “folks” — a Biden trademark — toward the end.

Before the ceremony, a morning mist left the platform icy. The wind whipped throughout. There were just enough snow flurries to tell stories about. And by the end, the sun came out and shown brilliantly.